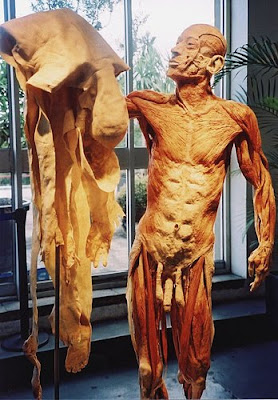 News from Germany: copulating corpses are coming soon to a museum near you.  Created by anatomists Gunther von Hagens and Angelina Whalley, the frisky dead are part of their latest installment in the Body Worlds exhibitions, PG-versions of which have already toured the globe extensively.  You've probably seen these figures before--real cadavers that von Hagens and Whalley skin, dehydrate, and then coat with plasticine, no doubt with The Cure playing in the background and clove cigarette smoke aloft in the air.  The current exhibit is called "Cycle of Life," charting  human anatomy from conception to old age to ending up in a Museum of Natural History contemplating your own skin.  It's been to Berlin (surprise!) and now a more "explicit" version dedicated to human sexuality is making its way to Zurich.

Where to start?  Well, first of all, the show in Berlin apparently met with some resistance, which seems incredible as Berlin long ago cornered the market on being the most paraphilic-friendly city in the western hemisphere.  It's difficult to imagine anything shocking anyone there--but apparently a few locals have deemed the sight of cadavers "doin' it" to be "revolting" and "unacceptable."  Perhaps sensing Berlin is losing its edge (and Paris too, which banned the exhibit outright), Zurich has moved in and upped the ante.  Below is a direct quote from a Reuters story about the copulating corpse controversy:

The way a plastinate is exhibited can vary from country to country to reflect local sensibilities. A vote of local employees decided that one of the copulating female cadavers should wear fewer clothes in Zurich than was the case in Berlin.

This should make us all stop and think for a moment.

(Note of genuine despair: writing now at 10:35pm CST on 9/15 and Colbert has just led with this same goddamn story...must wait momentarily to see where it goes...okay, just a few jokes about how these exhibits make being dead look like so much fun...let us resume)

A vote of local employees decided that one of the copulating female cadavers should wear fewer clothes in Zurich than was the case in Berlin. 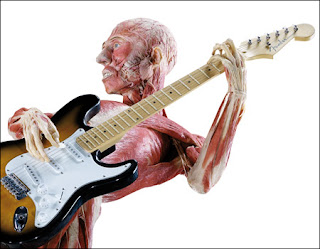 As a raving hypochondriac, I have never seen a Body Worlds exhibit in person--I already know my body is a rotting sack of meat and certainly do not need to have an acute panic attack in front a 7th grade biology class field trip.  But from the pictures I've seen of these "plastinates," I have never known one to be wearing clothes.  Tennis-playing cadaver might sport a jaunty headband as a joke, but the whole point of this exhibit (allegedly) is to witness the symphony of musculature beneath the skin as it engages in common human activities, be that wailing on "Freebird," playing cards, or doing the hanging parallel ring exercise that no one cares about in the Olympics.

The addition of clothing--apparently only to the female cadaver in this coitus scenario--seems the most perverse confirmation ever of Roland Barthes famous observation that "the naked body is less erotic than the spot where the garment leaves gaps."  But where does that leave the "skinless naked body?"  Incredibly, von Hagens and Whalley appear to have felt a need to add clothing to an already hyper-nekkid woman so as to....well, what exactly?  Make it more "tasteful?" Hotter?  More legible as a sexual scenario?  Obviously there is no "good" answer to this question, only a strangely unexamined set of assumptions about representing sexuality itself.  Contrary to the famous credo of anti-porn feminism in the '70s, the ultimate ambition of the male gaze is apparently not "women without skin," females objectified to the point that clothes, identity, and the epidermal layer all melt away into supreme obscenity, but is instead a skinless "frenzy of the visible" (google it, perv) tastefully framed by an appropriately seductive outfit.

Even more incredibly, there is apparently a group of "local employees" in Zurich with a union so strong that they get to vote on appropriate attire for copulating female cadavers.  And even more disturbingly, once enfranchised with this awesome responsibility, these employees decided this particular copulating female cadaver should wear even less clothing than in Berlin.  I guess this is either a perverse compliment to the woman who donated her body to this project or a subtle dig at Berlin for becoming the Kansas of Europe.  Berlin!  In Germany!  A country that only twenty years ago gave the world Nekromantic, a film in which a a guy wakes up one morning to discover his girlfriend has broken off their menage-a-macabre by running away with the corpse! 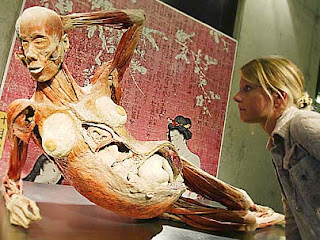 Like all freakshow carney routines, Body Worlds bills itself as educational.  Seems to be the same lesson every time--hey, you look like a bacon blue-plate special underneath your precious, precious epidermis, meatbag.  But perhaps something more useful is going on here.  Maybe the "Let's Get It On" edition of Body Worlds is an elaborate scheme to smoke out a few necrophiles, much like those Sheriffs who post offers for a free speedboat to lure boneheads with outstanding warrants into coming down to the courthouse for easy cuffing.  Or, perhaps, it's a cogent reminder that you should leave incredibly specific instructions for your body after death--lest you end up working a pole in the Kitty Korpse Klub with Teamsters voting on whether or not you get to wear a G-string.