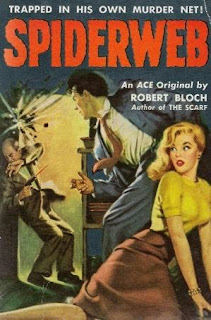 After six months in Hollywood, Eddie Haines is ready to slit his throat.  Literally.  Standing at the mirror in his cheap hotel with a razor at his jugular, Haines is interrupted by the odd Professor Hermann.  Soon Haines is in training to be the handsome face and soothing voice fronting Hermann's schemes to use cult psychology to fleece various dimwitted movie stars.  Everything seems to be going well until Haines discovers Hermann and his colleagues are not above murder, blackmail, and other less esoteric criminal enterprises.

A great opening 50 pages that could have led to a legendary Hollywood noir about the various mystic trips of mid-century L.A. (and those running scams on the gullible glitterati).  Instead, we end up with more heavy-handed gangster stuff. Recently reprinted by Hard Case along with Bloch's The Shooting Star (1958).
Email Post
Labels: 1950s cosmic crap criminal behavior evil academics Hollywood mind control pulp