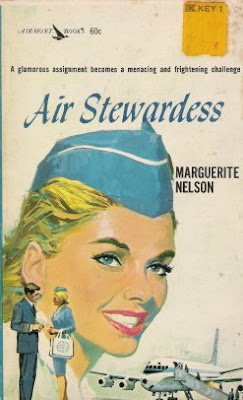 Beautiful Linda Martin has just taken a new and more glamorous route as an air stewardess.  Her new job involves driving from her apartment in San Diego to the airport in Tijuana and then flying the route down to Mexico City--twice a week.  While in the air, Linda has plenty of time to mull over a dilemma.  Will she give her affections to Pete, the young and brash cub reporter for the San Diego newspaper, or Carlos, the suave and very rich real estate developer in Mexico City?  During the plot's several flights back and forth, we learn some of the duties of the air stewardess, fly through unending walls of terrible weather, and make an emergency landing without wheels at a small Mexican airport.  Linda and Pete eventually get into a fight (triggered by Pete's penchant for calling Linda "woman"), and after a romantic evening in Mexico City, she accepts Carlos' marriage proposal.  A few days later, Linda is supposed to meet Carlos in Tijuana and then fly back together for a big wedding announcement in Mexico City.  But who should be on the flight--for the first time ever--other than Pete himself?  Linda is conflicted.  She still has feelings for Pete, and yet here she is flying to Mexico City to announce her engagement.

As fate would have it, the flight runs smack into a tornado in the Sonoran desert.  Somehow, a giant buzzard breaks through the cockpit window, injuring the pilot and knocking out the co-pilot.  They struggle to land and barely escape with their lives.  Trouble is, the landing (or perhaps the buzzard) took out their radio, so they have no way of telling anyone where they are.  But, as it further turns out, Pete is a HAM radio enthusiast, and with  Carlos' assistance, he quickly gets to work on improvising a transmitter.  Linda, meanwhile, tends to the many scared and injured passengers, some of whom are heartbreakingly young and cute children.  Pete eventually succeeds in fixing the radio and soon help is on the way.  In the process, Carlos realizes that Linda still has feelings for Pete and knows their engagement cannot proceed.  But it's okay, because Carlos acknowledges that Pete is a "fine man" and they will all be great friends no matter what happens.
Email Post
Labels: 1960s golden state of mind romance what girls think about