Two more brainiacs stumble down a mineshaft and discover a vast civilization hidden in the middle of the earth.  Separated from his partner as they watch a huge battle unfolding before them in a subterranean cavern, Frank Comstock runs blindly through the various passageways straight into a hectic traffic jam featuring near-sighted white-faced men in little go-carts.  These are the people of Wu, or as Frank calls them, the "chalk-faces."  Captured, Frank is almost put to death until a curious and kindly Wu professor intervenes and takes him home to study and train. 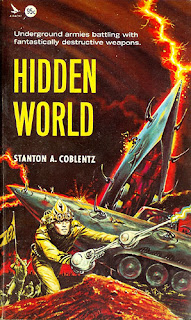 And then begins the political satire/allegory one expects anytime someone ventures under the earth's crust.  In Wu, we discover, there are three classes: an enfeebled ruling elite who own everything, a "second class" of bureaucrats and administrators, and a mammoth "third class" of impoverished laborers.  Only the "third class" pays taxes.  War with the rival underground nation of Zu is constant, whipped up by such Wu rags as the Screamer and the Blare.  Excesses of material goods are burned (by the impoverished "third class," no less) to create scarcity and maintain high prices.  The reigning philosophy of the land is "thoughtlessness."  As a kicker, the feminine beauty ideal of the Wu is to be as fat and wrinkled as possible, a goal that Wu women spend much time and money in achieving.

Soon Frank has fairly well acclimated to life in Wu.  The prospect of marriage with the particularly fat and wrinkled daughter of the Professor sends him back into escape mode,  however, leading to his falling two miles down a ventilation shaft.  As it so happens, this solves a major ventilation problem for the Wu, and Frank is soon a hero (and promoted to a cushy "second class" job).  In his new job he discovers a long forgotten ventilation wheel/valve, which he soon uses to hold the entire Wu nation hostage by threatening to cut off all their air.  Through this ruse, Frank becomes the supreme leader of the Wu, and in a military campaign against the enemy, discovers his old friend from the surface has advanced to a similar position in Zu.  Together they make a plan to fix the problems of Wu and Zu before heading back to the surface, but both narrowly escape revolutionary mobs upset over the radical changes instituted by the two leaders.  They end where they began: in a Nevada mining town.

Bonus points for historians of TV and other technologies:  at one point, Frank attends a "phonoscope" performance, which involves live 3-D transmissions from the Wu/Zu war front projected on the ceiling of a huge cavern.
Email Post
Labels: 1930s humor sci-fi