Sheen and His Discontents 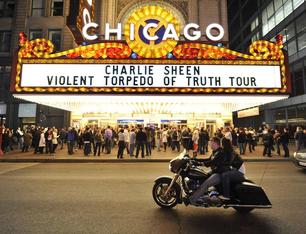 I was a witness to Charlie Sheen's "Torpedo of Truth" in Chicago over the weekend.  Like a survivor of Jonestown or the uneaten of the Donner Party, I feel honor bound to provide an account of the event for the historical record.  If I had more time and energy, I would try to polish up this warlock turd of a performance into a cultural milestone of some kind, a symptom of a deeper sickness in the media, in masculinity, in America, in myself.  But truth be told, there isn't really much to work with here.  Don't get me wrong--the night was as fascinating as it was boring, notable for drawing together a crowd that fully expected NOT to be entertained, but rather to simply be present in case anything horrifying, embarrassing, illegal, or violent unfolded.  Given that Sheen had nearly been tarred and feathered in Detroit the night before, much of the audience's interest appeared reflexively focused on the potentiality of its own behavior.  Will we boo him off the stage?  Let's stay tuned and see what we do!

First of all, the sociologists and ethnographers among you might be wondering who (apart from jaded media professors) would actually show up to see Sheen on stage.  While I can make no claims based on statistical surveys or "thick descriptions" of the Sheen community, I can at least describe a few of the people I saw in the lobby.

--There was a woman in a cat suit.  Not a sexy catsuit, mind you, but a rented Halloween costume simulating some kind of spotted big cat.  She also had on whiskers and little pointy cat ears.  I think her goal was to get on the TV, thus crossing the daunting threshold of fame that comes with a two-second cutaway on the local news.

--I saw a fairly "ripped" dude who had torn the sleeves off a perfectly good shirt to better display his "guns," accompanied by a man with a wholly age-inappropriate wallet chain.

--I saw three or four bald guys, somewhere between 40 to 50 years in age, wearing matching or at least extremely similar leather sports coats.

--There were a few young women near the bar wearing Capri pants with stiletto heels.  One of these women would later approach Sheen during the performance carrying a sign that read, "Take Me to Your Closet."  I think this was code language communicating her willingness to have sex with Charlie Sheen.

--College students bespectacled with hard-plastic black frames were also well represented.  A slight hint of reefer followed in their wake.

--A guy sitting near me had come to the theater by himself and spent much of the evening nodding "knowingly" at Sheen's indictment of women, his bosses, the "system," and various other obstacles facing middle-aged men.

--An obligatory call from the stage for Cubs and White Sox fans to shout out their respective allegiances yielded the following data: 1/3 Northside, 2/3 Southside.  Make of that what you will.

Forgoing the videos, rappers, and posterboards of the Detroit flop, Sheen in Chicago opted instead for an "Inside the Actor's Studio" approach--only with a douchebag shock-jock in the role of James Lipton.  As a crowd management strategy, adding an interlocutor to the act was probably a wise decision.  From what I could tell, the interviewer (who was not named during the proceedings) was there to "read" the crowd and hopefully prevent it from "turning" on Mr. Sheen.  He also served as a "hype" man, pumping up the crowd with testimony of Charlie's awesomeness, and as the occasional cattle-prod applied to the generally listless Sheen so that he might "rant" in more animated detail about various perceived injustices and abuses. Shock-jock dude also asked us if anyone had "done a number two" during the intermission, so that should give you some idea of his talent for sparkling banter and insightful questioning. There was also a guy on stage with an electric guitar and small amp who would occasionally offer shredding punctuation to Sheen's rambling observations, kind of like the "rim-shots" of old, but more awesomely metal.

What was the theme of the evening?  To hear him tell it, Sheen has "had enough."  Enough of the lies, the bullshit, the cowardice, the hypocrisy, the repression, the compromises, and the "establishment" in general.  The new Charlie is all about telling the truth, no matter the consequences, and living a life of absolute freedom.  The famous "goddesses" are vital to this new philosophy in that they allow him to do pretty much anything he wants and have no interest in curtailing  his freedoms, unlike his previous three wives who were all, to a woman, massive "bitches."

Some of Sheen's assorted observations:


*The guy who founded AA ended up an "acidhead" who seduced many of his friends' wives. No one talks about "that shit."


*The prostitute responsible for Sheen's detention while partying at NYC's Plaza hotel enjoyed an evening of very expensive champagne, received a generous payment for her services, and stole Sheen's platinum watch--but Sheen never got to have actual "relations" with her.  This struck Sheen as most unfair.


*More than likely, Laura Dern lost her virginity to George Clooney while shooting Grizzly 2: The Predator. At first Sheen let it hang in the air for awhile that maybe HE had made a "conquest" of Ms. Dern, but then his classier side kicked in and he honored Clooney as the "smoother" cocksman.


*Jon Cryer is actually a great guy and Sheen regrets implying he might be a troll.


*Continuing the odd Apocalypse Oedipus vibe in many of his recent statements, Sheen lamented that his father (Martin Sheen) had gotten all weird and "religious" on him lately, but was nevertheless still awesome because he had the guts to go upriver and take out Kurtz in the greatest movie ever made.
As stated above, Sheen struck me as rather listless--maybe because the experience in Detroit the night before had been so harrowing  Much of the evening seemed to involve shock-jock Lipton trying to work Sheen up into a lather about something (alimony, thieving whores, drugs, the TV industry) so that the star attraction might "go off."  It was rather like watching someone poke a sedated badger with a stick, resulting in intermittent,  fleeting paw swipes in the air at nothing in particular.   There also seemed to be a strategic effort to use all of the most famous "catch-phrases" associated with Sheen ("bi-winning," "warlock," "rock star from Mars," etc)--probably as a way of facilitating better T-shirt sales in the lobby.

Like so much popular culture and popular art, however, what was most interesting about Sheen's "act" was the seemingly oblivious indulgence of profound contradictions.  And here the show actually was somewhat interesting in that it spoke to that longstanding popular desire to live a life more free in a world less horrible, but expressed in a logic wholly indebted to just how confining and horrible the world can actually be.

1.  Charlie's two ladyfriends are "goddesses" who bring him joy like no else in all his life, precisely because they respect his commitment to absolute freedom.  They have no "hang-ups" about commitment, possession, and the other trips that block total honesty.  Sheen even closed the proceedings by reading a three-page prose-poem written by Natalie "Napalm" Kenly testifying to the nobility of Sheen's quest to speak truth to bullshit.  AND YET, at another point in the evening, Sheen tells the audience that everyone should have two of everything--"cheeseburgers, cars, women"--so that if one of them goes "bad" or is "in the shop," you  always have a back-up.  The goddesses are special and precious, in other words, but are ultimately like kidneys--you need two in case you experience a systems failure of some sort.

2.  Reminiscing about smoking pot in Malibu with his other 11-year old buddies back in the day, Sheen suddenly stops and shouts, "Fuck Malibu!"  Nobody there but rich phonies and Hollywood assholes, he asserts.  Not like the people of Chicago, he continues, who "get it" and are honest people possessed of a "no bullshit" grittiness (again, no doubt because of the Detroit debacle, Sheen's pandering to the awesomeness of Chicago was a major theme all evening).   Having cast his lot with the good "regular" folk of the heartland, however, Sheen later treated the crowd to a story that ended with Sheen saying to yet another adversary, "I'm wearing a platinum Rolex on my wrist and all you've got is a Swatch, so fuck you!"

3. Although Chuck Lorre's name never came up per se, Sheen continued his ranting about how pathetic and troll-like the TV industry is.  Two and Half Men is a good show, he asserted, and he gets along great with his co-stars.  But all of the higher-ups in management are complete and total "fucking assholes" who didn't "give a shit" that Sheen was hammered for the first eight years of the series, as long as the ratings were high....Still, if Lorre and WB offered him his job back, he'd gladly take it.

So, in essence, Sheen's rants had (and have) a habit of doubling back on themselves in ways that reveal his (and I suppose "our") completely schizoid fantasies about power, work, sex,  freedom, and other prime motivators of our psychic life.  Quite honestly, I don't think he has any real clue about what he thinks or about what is happening to him--and perhaps that is the appeal, he really does seem to be working without a net.  Despite all the talk of "winning," however, there hung in the air a distinct sense that the next stop will be a sad reality series on E or VH1, and that Sheen will be forced to maintain that this demotion from being the highest paid performer in television to the next Bret Micheals is somehow totally awesome and even preferable to his former gig.  He's also putting a lot of stock in the fantasy that we all have an overwhelming desire to see Major League 3.

Last point: we left just as Sheen was reading the closing letter written by Goddess Kenly so that we might beat the crowd to the cab stand.  Emerging from the theater, I was startled to see a gauntlet of video cameras waiting to pounce on the crowd for their reaction to the show.  With no masses to hide in and behind, and dreading that some local reporter would ask my opinion about the entire evening, I felt deep inside the faintest stirrings of a long lost sensation that I believe I once called "shame"--as if I had just been caught emerging from a brothel / geek show / monster truck pull.  But happily that quickly passed as soon as I was back in the shadows of the night, cruising home to catch TMZ.