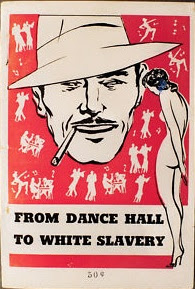 Ten cautionary tales for young women coming to Chicago in the early 20th-century, all united in a common theme: if you go to any of the city's many popular "dance halls," you most surely will be plied with alcohol and "ruined" either through deflowering, deflowering + pregnancy, or deflowering + pregnancy + death.  An opening chapter gives us statistics on just how horrible dance halls are for young ladies, and then warns girls about a series of particularly immoral dances: the "grizzly bear," the "rocking horse," and the intriguingly titled "railroad round."  Any of the three dances have the apparent ability to make a fertile woman pregnant on the spot.

With the facts and figures out of the way, Dillon then narrates ten particularly harrowing accounts of dumb farm girls and vulnerable immigrants "seduced" by various dance hall Lotharios.  Here's what you get:

1.  Girl from "Goshen," Indiana arrives in Chicago to live with sister and brother-in-law.  Told not to drink alcohol at the big dance, farm girl is tricked into believing that an "Absinthe Frappe" means a cold drink with an "absence" of alcohol.  She ends up basically unconscious and dragged into a secret room to be violated.

2.  Knocked up by an itinerant gigolo, a young woman swallows a bottle of carbolic acid on a bench in Humboldt Park.

3.  Young mother abandoned by ner-do-well father turns tricks at a dance hall on Clark street.  Eventually faints from hunger and effects of narcotic addiction.  This tale is narrated by a figure named "the outsider," who may or may not be a prospective John.

4.  "Wallflower" grateful for the attentions of a dashing young man allows herself, willingly, to be liquored up and seduced.

5.  Polish girl arrives in Chicago to live with her older brother.  When the older brother gets in a fight with another man in the community, that man sets out to seduce and destroy little sis.  He succeeds.

6. Engaged Irish girl goes to costume ball without her engagement ring.  It's a "bohemian" affair with lots of European dancing and the smell of "questionable" cigarettes in the air.  Drinks designed to hide the taste of alcohol make the girl wholly amenable to leaving the dance with an Italian street singer and spending the night at the Cadillac Hotel.  We close with her finance standing alone under a street light at 2:30am, wondering how he got ditched.

7.  Two college boys plot in a bathroom as to the best strategy to seduce a telephone operator and her friend.  A dance, dinner, and drinks downtown lead to the "telephone girl" losing her job.

8.  Another Polish girl makes the rounds.  Here Dillon provides a more detailed account of how dancing "the grizzly bear" leads to a compromise of morals.  In the end, two men are drunk and in a fight.

9.  Description of the White Front Cafe at 18 E. 22nd St. on the southside, purportedly the most heinous of all the dance halls.   Here girls, recruited from other parts of the city, are trained in the arts of prostitution and getting men drunk enough to do some "jack-rolling."  Dillon describes "code" adopted by the waiters and the girls to ply the men with heavy alcohol while the girls imbibe simulated cocktails.  Once drunk enough, the men are easy prey for pickpockets and strongarm men in the street.

10.  Also set at the White Front Cafe: a girl "on the slide" has been working the system for 5 years.  She confides with a patron that she's ready to quit--now that she's in her mid-twenties, none of the men want her anymore anyway.  Though her job does not allow her to leave the hall before 3am without a man on her arm, she decides finally that she's had enough and walks over to get her coat and leave for good.  But the bartender sees her trying to leave and calls over her waiter/pimp.  The patron/narrator watches from afar as the two talk animatedly, and then finally the "girl on the slide" retires to the dressing room.  Five minutes later she's back on the floor.  The patron/narrator goes outside and stands in the rain.
Email Post
Labels: 1910s advice Chicago drunks Mary Jane Sleaze true crime