The Grapes of Cable 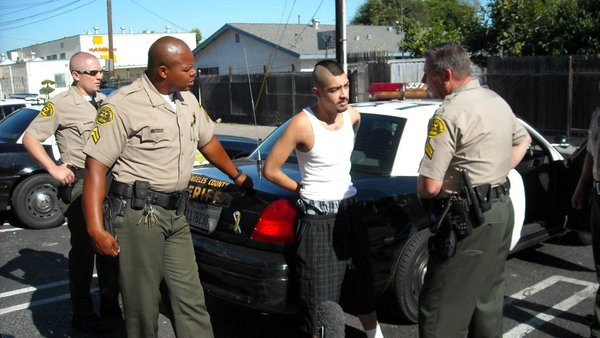 Time will tell if the nation's current economic "realignment" produces its own John Steinbeck. Some might argue Douglas Coupland began a bid for that throne twenty years ago in his famous novel of diminished expectations, Generation X (1991). Then again, it may well be today's "Steinbeck" is working in another medium altogether, Twitter perhaps:


OMG Laid off @ Brookstone. Leaving 2Mor for Shanghai where I hear U can pick and eat oranges straight off the trees. BIOYA USA

Television is another likely candidate.  Where better to document the quotidian humiliations of an empire in collapse than in the quotidian humiliation of television?  No doubt the future will bring more dramas about the political and economic snafus of the new century, while a certain "gallows humor" will continue to circulate through the comedy and talk circuits.  But to really stare into the face of contemporary despair, the best bet is still probably reality television; specifically, the hordes of half-hour concept shows that occupy the more thematized spans of the cable tier.

Take Bait Car, for example.  I'd describe it in my own words, but as TruTV has taken the time and effort to bait you into watching it, I'll let them speak for themselves:


A shadowy figure walks past an unattended automobile. It’s unlocked. The engine’s running. No owner in sight. Without hesitation, the perp climbs into the driver's seat and speeds off, thinking he has evaded punishment. Unfortunately for him, a hidden video camera has been installed on the dashboard and a nearby police force has been watching his every move. The suspect has been caught. With the press of a button, the officers shut down the vehicle. The suspect is arrested on the spot and led away in handcuffs. He has been snared with a Bait Car.
In terms of actual execution, Bait Car features three segments per half-hour, each identical in structure:
1). The "Bait Car" is abandoned in a high crime area (usually staged to look like an emergency); 2). we sit with the cops as they observe suspects checking the car out; 3). a "perp" finally takes the plunge and drives away, initiating a brief chase that usually terminates with the po-po using a kill switch to de-activate the engine.  Sadly, and true to its title, the "pleasure" of watching Bait Car is very much like that of fishing, except here you can actually see the "fish" gathering and contemplating the hook before feeling the strike.  A quick review of the episode guide suggests Bait Car used to vary both the cars and the locations, but as with all other gateways to cheap addiction, now the producers appear to have decided to "cut to the chase" both literally and figuratively by focusing only on L.A. and fishing with just one supremely tricked-out Escalade. 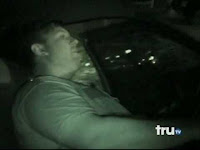 Bait Car goes for the same tone the Weekly World News and other tabloids have mined for years, flattering its viewers for being so much smarter than the dumb criminals who get tricked by such an "obvious" ruse (and admittedly, it is hard to imagine how anyone would think a 2011 Escalade left unlocked and running in gang territory could be anything other than a "bait car").  There is also the priggish moral victory of seeing a street thug "get what's coming to him," a triumph made all the more sweet by the humiliation of entrapment (the "money shot" of Bait Car is from a camera inside the vehicle, showing the stunned reaction of the perps as they realize they've been "set-up" and caught: the viewer thus feels rewarded for their own cynicism--Any sane person would know a car that easy to steal is too good to be true!).
Mostly, though, Bait Car is just depressing. Not only does it contribute to the Cops mentality that everyone outside the white middle-class is scheming to steal the white man's shit, its monotonous repetition of this single "hook" scenario over and over again reinforces the sense that poverty and crime is indeed a depthless "ocean," and that there is no solution to the problem other than constantly (and futilely) culling the most gullible sharks out of the school.   Then too, there is also the utter waste of it all:  a two-ton Escalade left idling at the curb, surrounded by five cop cars also idling as they wait for the chase, all in a giant potlach of gasoline and manpower so as to entrap one poor sap coming home from the Stop 'n' Shop with a pocket full of losing MEGA MILLIONs tickets that the State just used to steal his shit (which in turn, in the great circle of viciousness, helps pay for the cops and  the "Bait Car" that will soon have him in the County pen).  Watching an episode or two, you can't help but think: wouldn't this entire problem be better addressed by putting more people to work building a state-of-the-art public transportation system?  To paraphrase Brecht: Is it a bigger crime to steal an Escalade or to build one? 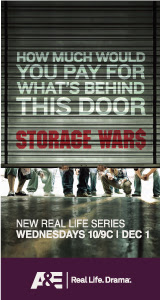 For a more comic take on our ongoing dispossession, there's Storage Wars on A&E.   Those who have ever rented a storage space know the basic rules that make this show possible: miss a couple of months rent and you get locked out of your space; miss a couple more months rent and the storage facility gets to auction off your possessions.  Storage Wars follows four buyers (each given a colorful nickname, presumably in a dream of T-shirt marketing opportunities) who wander around southern California bidding on these abandoned/foreclosed storage spaces.
If the buyers actually knew what was in the space before the auction, the show would be pretty boring.  Instead, and apparently according to the Constitution governing all storage joints, the manager opens the door and allows bidders to peer into the space for 5 minutes.  Crucially, however, no one can actually enter the space or touch any of the items.  This gives the show a detective vibe as potential bidders have to guess what might be in the space according to very limited clues.  A glimpse of brushed stainless steel?  Could be full of lucrative commercial restaurant equipment.  A box labeled "Elvis?"  Could be valuable Presley collectibles; then again, could be the old baby pajamas of a kid named Elvis.  And what's the weird tall thing under the tarp?  Here the show plays on a primal instinct that probably dates back to Cromagnon times:  "What's in that other guy's cave and is it worth my time and resources trying to take it back to my own cave?"


Once everyone has had a gander at the mysterious piles of crap, the auction starts and plays out according to the usual conventions of auction-based dramaturgy.  Who will get the space and for how much?  Will X outlast and outwit Y for a chance at the odd canisters piled up in the back?  The show attempts to intensify this angle by calling itself Storage Wars rather than merely Storage Auctions, inviting us to identify with one of the buyers as our surrogate in all the guessing, bidding, and buying.  There's the young couple looking for items to restock their humble thrift store.  There's "the collector," an older dandy who is only interested in weird esoterica.  And there's "the gambler" (and his son), a rough everyman just trying to make an honest day's living in the junk business. 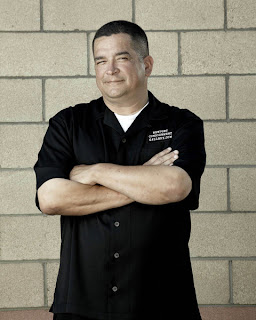 And then there is Dave.  Dave is a real asshole.   And as the resident villain of the series, he also provides a valuable lesson in capitalist alienation.  Dave is by far the richest and most successful of the buyers and is thus the guy most flush with cash.  Unhappy with having any upstart competition for these spaces, Dave makes a habit of bidding up properties he has no intention of buying, his sole goal being to drive up the price for the winning bidder and thus cut into his profits.  And there is no subtly to this ruse--he admits it up front: "I don't want that crap, but I'm going to make X pay through the nose for it."  Why?  Because Dave is an asshole.  Correction: by living and trading in a world where capitalism inverts relations between subjects and commodities, Dave has been made into an asshole.  He would rather see a young couple starve than let them have access to some beat-up patio furniture for under $300.  Whether or not the average Storage Wars viewer makes the connection between Dave and the market in commodities speculation is unclear, but here's hoping.


After the bidding comes the reveal, a combination of opening a Crackerjacks box and  "Let's Make a Deal."  The weird thing under the tarp?  An old and useless fake Christmas tree.  The Elvis box?  Two gross of Presley Pez dispensers from the 90s--not worthless, but no goldmine either.  And the brushed stainless steel?  An industrial restaurant dishwasher and a major score (for Dave, of course).


Not that I would accuse the producers of Storage Wars of "faking" anything, but the four combatants do seem to have an extraordinary talent for finding inexplicable objects that need to be taken--Antiques Roadshow style--to an appraiser for further evaluation (an odd old-timey flask with a counter-intuitive hole in it is thus revealed to be---a portable spittoon from the 19th century!)  I also remain suspicious of one "score" in which a buyer bought $12,000 worth of "mint-in-box" 70s action figures for around $200 (more than likely, this was crafted to fulfill the ultimate fantasy of the many garage-sale geeks who no doubt form a key demo for the series).


As with Bait Car, however, a certain melancholia pervades the proceedings.  At the end of the day, after all, our four protagonists are essentially profiting off the misfortunes of others.  Each vault of objects speaks mutely of someone too broke, too disorganized, or too dispirited to keep up their payments.  Here sits a bunch of stuff, once deemed important enough to store securely, now left wretched and abandoned.  It also hints at a future where we are all Joads of one kind or another--doing our best to protect a rambling truckful of wealth from the many vultures (and Daves) waiting to swoop in and appropriate our misfortunes to secure their own tiny fiefdoms, which in turn must be guarded from even bigger savaging birds of prey.  Though it ultimately reduces us both as fellow human beings, there's nothing I'd like to see more than some huge metal salvaging corporation move in and start fucking with Dave...just because they can.
Email Post
Labels: Commerce Fatal Strategies Just Depressing The TV Troubling