Be Careful with that Ax, You Genius 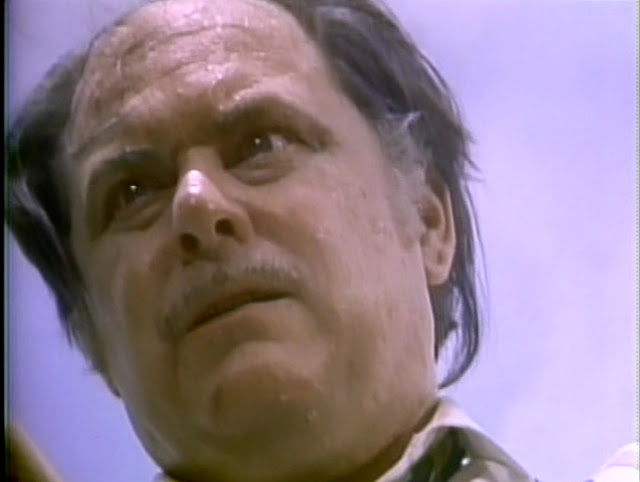 I believe it was the great Anton Chekhov who observed, "If in Act I you have a psychopath chopping wood with an ax, then he must use it to kill and dismember his surrounding cast in the last act." In the opening moments of Don't Look in the Basement (1973), we follow a nurse as she makes her rounds of the Stephens Sanitarium so as to introduce the film's various mental patients. The philosophy of Dr. Stephens is that the insane can only be cured by journeying deep within their madness.  A shell-shocked vet is thus allowed to look out his window all day with binoculars in search of the Viet Cong.  A traumatized young mother tends to a doll as if it were alive.  A weird man-child is allowed to wear a striped polo shirt and grow out his hair like Richard Simmons.  In other words, the insane are allowed to do pretty much whatever they want all day, allowing each to manifest a colorful monomania that makes them all easier to remember. 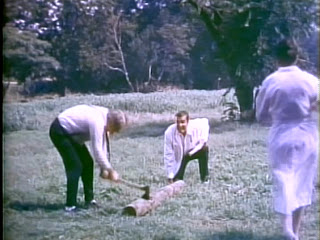 As the nurse finds Dr. Stephens, he is on the sanitarium grounds supervising an invigorating session of ax therapy with "the Judge."  I'm not sure what the Judge did to end up in the Sanitarium, but as the portrait in sweat and psychosis above suggests, he has the glazed expression of a man who, generally speaking, probably shouldn't be allowed to have an ax.  I will let you decide, based on the blocking to the left, if Dr. Stephens is observing the minimum ax-to-doctor clearance recommended both by the American Psychiatric Association and common sense.  Personally, I'd move back a scootch. 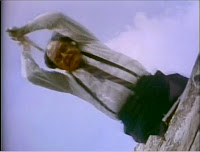 Dr. Stephens' experimental therapy involves shouting encouragement to the Judge as he wails on a log.  Shots alternate between  medium close-ups of the doctor and low-angle canted shots of the Judge.  As the Batman TV series established so long ago, canting the camera most often conveys a sense of crazy deviance, and here it reminds us that the Judge is indeed a total whack-job (so to speak), especially considering his decision to attend a no doubt previously scheduled ax-therapy session in a tie and suspenders. 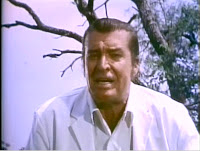 Stephens' "therapeutic" dialogue consists primarily of reminding the viewer that his patient indeed possesses and is in fact currently using a very large and seemingly extremely sharp ax.

Boy, they really want us to remember that ax, thinks the viewer.  I'm betting, a la Chekhov, that we're going to see the Judge using that ax again later in the film, probably in the very basement we've been warned not to look into. 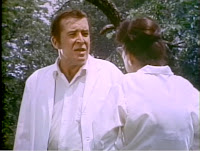 The nurse steps in closer and Stephens stands-up for a two-shot.  He's very happy with the Judge's therapy and updates the nurse on their patient's progress:

Can you sense how each stroke reaches down freeing some part of his conflict, perhaps just a cell or two of the unconscious brain, yet he's reaching it.  Reach for it judge! 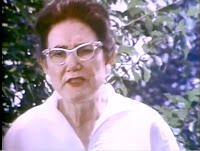 Here the nurse might remind Dr. Stephens that the "unconscious" does not actually exist in individual brain cells--but she has no time for debating the subtleties of psychoanalytic theory.  In a brief shot-reverse shot exchange, we learn that the nurse is quitting her job at the sanitarium.  The patients are just too hard to control, especially with Dr. Stephens encouraging them to act out their symptoms all the time. 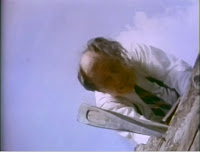 All the while, we hear the sound of the Judge continuing to chop at his therapy log off-screen.  He is, in the words of the doctor, really "using it," "striking it," and "reaching for it!"  Wow, we continue to think, the director really, really wants us to remember that the Judge is good with an ax.  In about 70 minutes, I bet that basement we're supposed to stay the hell out of is going to be knee-deep in blood and nurse parts.

We cut back to the judge just as he lands a particularly impressive canted blow into the log. 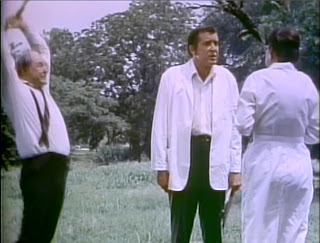 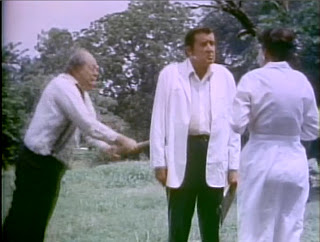 But what's this?  In the very next shot, we see that the Judge is now standing erect once again...with the deadly ax overhead and pointed right at Dr. Stephens!   And honestly, it is difficult to know who to blame for what appears now to be a bloody inevitability.  If Dr. Stephens was already playing a bit loose with his profession's ax-to-doctor safety protocols, here he simply throws all caution to the wind by stepping out in front of the Judge's already much-hacked log.  Or perhaps we should blame the nurse for bringing up her petty employment disputes during an intensive ax-therapy session, an analytic technique that clearly requires the doctor's undivided attention lest his attention literally be divided...by a bifurcated brain!

The Judge continues his swing, "reaching for it" into the doctor's back.  A surprising, perhaps even delightful realization overcomes the viewer. We've been tricked!  That ax isn't coming back in the final act--it's achieving its dramatic destiny right this very second. 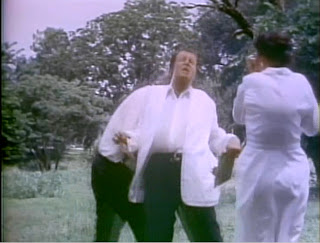 At least it seems like the ax might be going into the doctor's back.  Filmmakers will often "cheat" an angle for the purposes of more effective blocking, but here we've been more swindled than cheated as the Judge appears to be burying his ax into something about two feet behind Dr. Stephens. But Stephens is a good sport about it, especially considering this is his one and only scene in the movie.  He dutifully falls to the ground as if a massive ax blow has just hit him squarely in the back.  Understandably horrified, the nurse screams--but no doubt she is also thinking in the back of her mind,  "See, this is precisely the kind of shit I'm talking about.  Who in their right mind would try to cure a homicidal maniac by giving him a f@*kin' ax?"  And I'm inclined to agree with her.  Separating psychopaths from axes and other sharp instruments is Psychiatry 101, plain and simple. 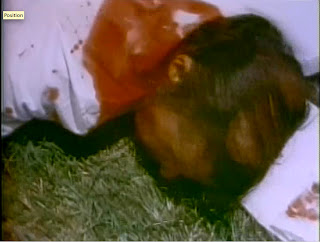 We then cut to a shot of Dr. Stephens dead on the ground. Now I'm no forensic specialist, but I can see no way to link this profusely bleeding neck wound with whatever odd pantomime the Judge has just performed in the previous shot. I mean, I get it, the Judge just killed the doctor with an ax, the plot can continue--but still, that's some pretty sloppy ax mechanics.  I'm beginning to think whatever might be in the basement actually isn't going to be such a big deal after all; or, even if it is, legibility is probably going to be a major problem.  Don't Look in the Basement!  No problem, because I'm having a hard time with the blocking anyway.  I'm sure whatever is down there will be underwhelming due to shoddy technique.

But before we get to our sad rendez-vous with whatever disappointment is in the forbidden basement, we at least get the stunning long-shot below.  It is a wonderful summary tableau of cheap 70s grindhouse horror: three obscure local actors standing in a non-descript field, one lying still on the ground with fake blood issuing from an impossible wound, another searching deep within herself to summon the appropriate response to a psychopathic ax attack, and "the Judge," arms raised high, on the verge of "using it, striking it, reaching it!" 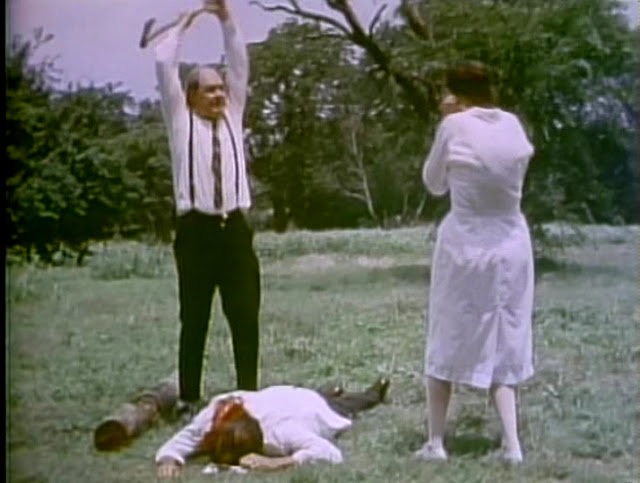