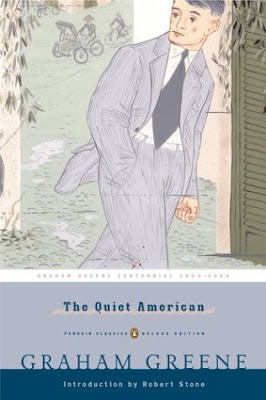 When two men are in love with the same girl it’s a recipe for disaster—especially when that girl is a hot Asian dish by the name of Phuong.  This is the main thing going on in The Quiet American by Graham Green, along with some major war action ripped from the headlines of the olden days that goes on in the background.  One guy is a cranky old English journalist who just seems mad at everyone all the time even though he keeps saying he doesn’t really care about anything anymore and would be totally fine if he just got killed already.  The other guy is this totally awesome American dude named Pyle who when the book starts we tragically discover is already dead.  You don’t realize how much this sucks though until you get through the whole book and find out what a cool guy Pyle was, especially compared to the cranky old English fart who is in charge of telling the story.  Then there is Phuong herself but we don’t know much about her because she is so inscrutable and doesn’t talk a lot.  When the action gets going (after we find out Pyle is already dead), the old British guy has it pretty good.  He is in Indo-China to report about the war between the French and the Indo-Chinamen (I thought this was very interesting because everyone thinks French guys are total wussies so the idea of them flying bombers around harshin’ the communists with napalm was pretty rad).
At any rate, Faircloth (which is the name of the man from England) has it pretty good, like I said.  Every night he comes home from seeing cool war stuff and Phuong is waiting for him with some sweet opium and ready to sex him up.  Things are so good that he doesn’t want to go back to boring old England, even though he might have to, because the job there would be a lot less cool and he has a mean-ass wife that won’t give him a divorce.  But when Pyle shows up (he is “the quiet American”) things start to go to shit fast for the English dude. First of all, Pyle is from Harvard and is super smart and has read a lot of books about all the stuff the English guy thinks he already knows so much about, and that leads to a bunch of boring fights over politics.  Faircloth keeps trying to act all old and wise and superior and says everyone should just leave the Indo-Chinamen alone, but Pyle is smart enough to know that everyone in the world wants to be free and sometimes you have to take a stand against evil-doers who would take the sweet liberty away from people.  As John Cougar Mellencamp once said, “You’ve got to stand for something or you’ll fall for anything,” and I think that’s pretty much what Pyle believes too.
But even worse for the English guy, Pyle starts creepin’ on Phuong right away and pretty soon tells everyone he plans to marry her.  And everyone is like, whoa, you 2 just met. And Faircloth is like, hey dude, she’s already with me!   What’s up with that?  You can tell this story is from the olden times because even though the two guys want the same chick they keep on being all polite to each other when most likely today they’d have a big fistfight over her (although I guess one time a couple of my buddies decided who would get to hook up with this smokin’ tri-delt by playing a game of beer-pong, so maybe the times aren’t all that different after all).  Pyle thinks he will win because he’s young and buff and can promise Phuong she will get the reward of getting to live in America (which would be awesome for her!).  But Faircloth acts all sarcastic and pretends Pyle is just a little punk and that the competition doesn’t bother him much, but he also knows he’s getting kind of old and fat and really doesn’t want to do much more than smoke his opium, rub one out, and fall asleep every night.  It’s like so completely obvious Phuong should hook up with Pyle but the author Graham Greene strings it along awhile as if there is actually some suspense—like a hot babe would really choose a fat old boring smartass English opium smoker over a dynamic young handsome and fit-looking American full of ambition and ideas.

In the most awesome part of the book (for me), Pyle and Faircloth have to jump out of a guard tower before a bazooka blows it up and Faircloth breaks his leg.  He starts whining to just let him die in the road (they are surrounded by enemy Indo-Chinamen) but Pyle does the right thing and carries him to safety—even though they both want the same girl!  That’s pretty cool in my book.  For a long time after that everyone waits around for a telegraph from the English guy’s old lady back in England to see if she’ll cough up the  divorce so Faircloth can marry Phoung and take her to meet the Royal family in London.  But the wife writes back and says, “forget it, chump,” and when Phuong finds out she decides to go with Pyle.  In the meantime Faircloth starts figuring out Pyle is up to all this super-spy espionage stuff and I guess that makes him feel even more old and insecure.  The big crisis comes when Pyle helps mastermind a huge explosion in Saigon to help the Americans straighten out the mess the French have made of everything.  This gets the English guy really, really mad.  You’re going to steal my girl and get all super political even after I told you not to?  It’s just too much.  So Faircloth eventually ends up ratting on Pyle by telling some tough dudes where Pyle is going to be one night and those dudes stab Pyle to death under a bridge.  I think this was a really shitty thing to do to some guy just because he stole your girl and disagrees with you about political junk, but in the end that’s what happens.  Plus, like I said, Pyle once dragged Faircloth’s sorry ass to safety and saved his life—so how’s that for gratitude?  Even worse, after Pyle gets stabbed to death, another telegram arrives and now the English guy’s wife says she will get that divorce after all and so he and Phoung will get to live happily ever after, even though she was going to marry Pyle just a few pages earlier.  So I don’t think the ending is very good because you feel all conflicted about who did what for what reason and it leaves a sour taste in your mouth.  It would have been much cooler if the British dude had just stepped out of the way and let Pyle and Phoung do what needed to be done and live the American dream, but instead he gets rewarded with opium and sex for being a back-stabbing weasel.
Email Post
Labels: Books Modernity-ism That Dude...