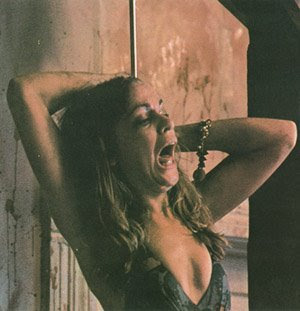 (AP) Buoyed by ABC-Television’s recent surprise hit, Conveyor Belt of Love, Fox television has just announced plans for their own edgy dating vehicle, Meathook of Lust.  Produced in partnership with the Speck Group, the series is slated to debut this June with a six-episode order.

Like ABC’s Conveyor, Meathook will feature a panel of five judges selecting potential dates from a pool of contestants.  But Executive Producer Dean Corll promises a more dynamic presentation.  “Conveyor shows their contestants one at a time, but our players will circulate on the ‘meat rack’ through the entire program,” said Corll from his office in Toluca Lake.  “The contestants won’t actually be on meathooks,” Corll added.  Instead, each will be suspended in a special harness that simulates a meathook in the back of the neck.  “We wanted to be sure our players still had the mobility to respond to challenges from the panel.”

Corll shared further details of the project, tentatively scheduled for Fox's 8pm slot on Wednesdays.  "The judges will have three options. Holding up the ‘Grade A’ sign means they are interested in going on a date.  That contestant will be taken down from the rack and placed in the judge’s ‘Love Freezer.’”  Unlucky contestants will receive the “Maggot Bait” sign and remain spinning on the rack unclaimed.

In the third option, Meathook allows each judge the privilege, once per episode, to call for a “Meat Inspection.”

“This is a really fun segment,” offers Corll.  “If you get a ‘meat inspection’ sign, you have to wriggle out of your clothes and down to your skivvies while still on the hook.”  The judges, meanwhile, will don white lab coats and yellow hard hats and approach the contestant to get a better look.  A special inspector’s flashlight will provide judges the ability to look for incriminating “flaws.”  “Dandruff, scars, semen stains…that kind of thing,” adds Corll.

In addition to Meathook of Love, the Speck Group is also pursuing a deal for their Jersey Shore knock-off, Nurse School.  “It’s going to a lot of fun too,” promised Corll, who added he could not yet share details of the program due to “legal concerns.”
Email Post
Labels: Exploitation Fatal Strategies Spectacles of Death The TV