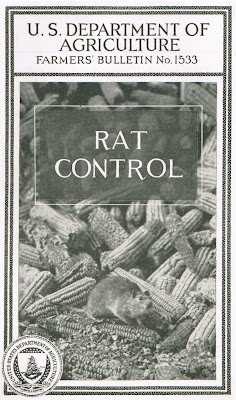 I found this pamphlet in the basement of the legendary Renaissance bookstore in Milwaukee.  Appropriately enough for a government brochure on "Rat Control," it was buried under layers of old magazines, sheet music, and shredded newspapers.  This might imply the Renaissance bookstore is a bit untidy.  Absolutely--but it is also a national treasure.  Housed on four anixously sagging floors of a 19th century warehouse in the downtown area, Renaissance is about the same size as The Strand in NYC but filled almost entirely with much older and much stranger books.  The basement is for true biblio-spelunkers only--you have to enjoy the simple act of digging around for nothing in particular, like a government pamphlet on rat control from 1933.

The pamphlet opens with a laughably optimistic statement of public policy circa the early FDR administration.  "Rats are probably decreasing in numbers in the United States, although their decrease is only beginning to become apparent."  Yes, a rodentless future no doubt seemed just around the corner, especially if Farmer John could be impressed to remember that "in spite of all that has been done to combat the rat, this pest is still mankind's greatest enemy in the animal world."  Another campaign a decade later would remind us that rats were so evil that they were in league with the Nazis, willfully destroying grain stocks that could be used to feed the allies.

"Rat Control" teaches farmers to do all the things we now recognize as common sense.  Cover your trash cans.  Block access to natural "rat harbors" (holes that lead into the foundation/attic).  But even after all of this, more severe action will no doubt remain necessary.

In a section labeled "Destruction of Rats," we get a lesson on just how much tougher rats and people were in the 1930s.  Corn farmers, for example, had to find a way to kill rats inside of their corn cribs--large bins full of sweet, tasty, freshly-harvested cobs where rats could both live and eat until they became mammoth, fructose-enraged agents of disease and destruction.  The government's recommendation was to blast them with a good dose of Calcium Cyanide gas.  In the photo below, we see two government agents demonstrating that "an iron pipe driven into the corn aids in getting the fumigants well into the center of large cribs." 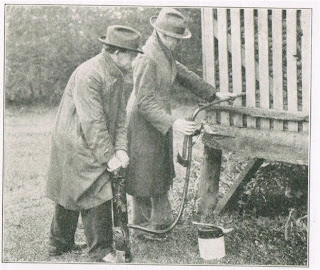 As you might imagine, amateurs working with cyanide gas probably had a keen interest in what to do should they ingest said fumigants.  Here is Uncle Sam's advice:  "If calcium cyanide has been swallowed, the treatment to be of any avail must be undertaken with great promptness.  The stomach should be immediately emptied with a stomach pump, as emetics often fail.  Keep on hand 1 ounce of a 23 per cent solution of ferrous sulphate, 1 ounce of a 5 per cent solution of potassium hydroxide, and 30 grams of magnesium oxide.  These should be mixed in one-half pint of water before use."  All well and good--sensible,  practical advice on how to survive an unfortunate encounter with rat poison.  But then comes the final sentence, one that could only have come from the typewriter of a bureaucrat who would himself never be involved in this activity:   "The action from cyanide poisoning is so extremely rapid, however, that there is rarely time for any antidote to be of value."  In other words, Farmer John, you can have Aunt Milly and Doc Anderson mix up as much ferrous sulphate as you want, odds are you're heading to the great corn harvest in the sky.

If cyanide is unavailable (or even better, "unadvisable"), the government suggests considering "other fumigants."  One effective strategy is to channel "exhaust gases from an automobile, tractor, or other gasoline engine" into rat burrows that might exist "beneath floors, and in other reasonably tight enclosed spaces."  In other words, the government here encourages you to run a rubber hose into your crawl space to pump carbon monoxide directly into your home.  Even better, there are NO warnings here about putting the entire family asleep--everyone knodding off forever as they gather around the radio to listen to The Shadow while the family tractor fills the house with deadly CO gas.   Oh well, I'm sure they updated later versions of this pamphlet. 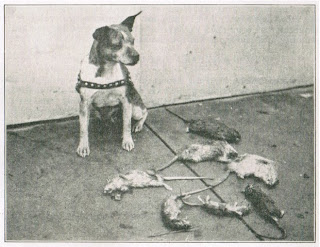 But in the end, the Dept. of Agriculture makes a nod to the Green movement of the future.  Apparently a small terrier dog tricked out in a badass studded leather coller "will sometimes keep a farm free from rats."  What about cats, you say, legendary comic adversary of the rat?  The Feds appear to have a low opinion of felines.  "Cats that are of real value as ratters are rare, and they are usually destructive to bird life.  When confined, however, in warehouses, produce depots, and similar places in cities, good cats are sometimes of value in destroying rats and mice."  Even more useless--the ferret.   "Ferrets are of little use ordinarily except in the hands of experienced men aided by good rat dogs." In other words, stick with Sparky, bedazzled canine agent of death.
Email Post
Labels: Animal Kingdom Archeology Bio-Horror Rodents Spectacles of Death