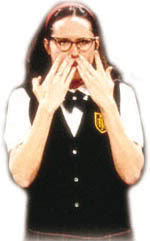 The formula for succeeding on Saturday Night Live has been fairly clear almost from its premiere 35 years ago.  Join the cast, work your way into more and more sketches, unveil a signature "character," get that character slotted into the opening 30 minutes as often as possible, use the increased exposure as a beachhead for introducing additional characters, repeat as necessary until you can quit and make more money in Hollywood.  I would describe a few of the SNL cast members who have followed this path, but really, I can't imagine anyone reading this would disagree with this assessment.  It even worked for Rob "Copier Guy" Schneider (well, that, and knowing Adam Sandler).

Critics of SNL sometimes complain this leads to lazy writing.  More ambitious and (dare one say it) original sketches get bigfooted by the predictable returns to be had in a more familiar gag--routines that sometimes consist of little more than the recurring character riffing off his or her usual straight-man.  Whether that's better or worse than having 100% original material each week is debatable. But certainly a bankable character on SNL does involve a type of comic shorthand, a reliance on instantly recognizable costuming and mise-en-scene, slightly differentiated yet basically identical set-ups, and perhaps most importantly of all--the catch-phrase.  Again, this goes back as far as the "wild and crazy guy" days of Steve Martin and Dan Aykroyd.  What has been remarkable in the most recent bids for recurring-character status on SNL, however, is the almost minimalist approach to this now tried-and-true formula.  The stakes of contemporary comedy being what they are, it is often difficult to know which routines are meant to be comedy and which are a type of “meta-comedy”—a commentary on the form itself (obviously, that distinction doesn’t really matter if the bit is funny, but as always, there is funny and then there is “funny”). 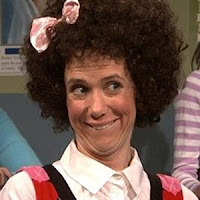 How, for example, to explain Kristen Wiig’s “Gilly” character—a creation that has now been repeated several times over the past two seasons and was even given coveted primetime exposure as the host of last year’s SNL Christmas anthology?  In her first appearance, “Gilly” seemed just another of the truly deranged bits Wiig and Will Forte usually uncork in the program’s last half-hour (like their powerfully bizarre country singing duo, Clancy T. Bachleratt and Jackie Snad).  If you haven’t seen "Gilly,” it’s essentially Wiig as a “bad seed” version of Little Orphan Annie—each sketch unfolding through an agonizingly slow repetition of “Gilly’s” increasingly dangerous hijinx, punctuated by Forte as Gilly’s teacher in super slo-mo disciplinary mode searching for each act’s culprit (accented by Kenan Thompson as Gilly’s classmate in a plaster-cast, frequently accused and yet clearly incapable of each prank).  Whereas SNL catch-phrases used to be as complicated as Mary Katherine Gallagher (Molly Shannon) proclaiming once per sketch, “Sometimes, when I get nervous, I put my fingers under my arms, and then smell them like this...", Wiig now has this convention down to one word, Gilly’s vacantly psychotic apology: “sorry.” As the sketch is so brutally minimalist in its design, pacing, and resolute refusal to develop in any significant manner from installment to installment, one has to consider the possibility that the entire thing is just a winking goof on the time-killing function of all recurring characters--not to mention their inevitable progression from fresh discovery to eventual irritant.

Not to be outdone, Fred Armisen introduced his own hyper-minimalist character during the show’s last new episode—the abrasively fierce “Riley.”   As the clip below illustrates, Riley’s strategy for a return invitation in future episodes involves—not the laconic unveiling of a distinct and memorable phrase—but instead really laying into the word “Bitch’ over and over and over.  This is one of SNL’s favorite sketch structures—a suburbanesque family of straight-men (in this case, both sexually and performatively) disrupted by an escalating comic transgression (a set-up eclipsed only by the staple of "slow-burn game show host struggles with moronic contestants" sketch).   Extra points here, I suppose, for placing the obnoxiously “bold, brash, and you'd better believe it" gay high school student in the same structural role as gangsta rappers, Goths, punks, and other potential “bad influences” on normative suburban kids—the threat centered not so much on homophobic fears of sexual conversion as on the horrors of contamination by a certain strata of gay subcultural fixations.
Will Riley be back?  Who knows?  But as much as Wiig and Forte have been the comic vanguard at SNL over the past few seasons, I would gladly see Gilly retired if it made room for Riley and Jake to have few more turns going to school, church, prom, or whatnot.  And I would really love to see a walk-on by Linda Blair...perhaps as Riley's less than fabulous Devil-worshiping mother.
Email Post
Labels: Intentional Comedy The TV