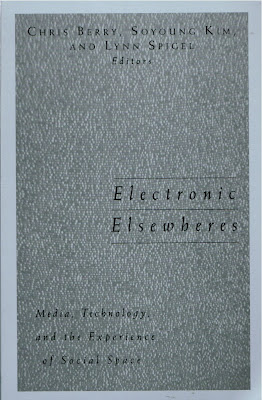 If you're looking for a good read to get you through the ongoing winterocolypse currently besieging the northern hemisphere, you might consider this diverting new title from the University of Minnesota Press, Electronic Elsewheres: Media, Technology, and the Experience of Social Space.  Edited by Chris Berry, Soyoung Kim, and Lynn Spigel, the book collects essays first presented at a conference we hosted at Northwestern a few years back devoted to....well, media, technology, and social space.

David Morley: "Domesticating Dis-Location in a World of "New" Technology.'

Lisa Nakamura:  "Avatars and the Visual Culture of Reproduction on the Web"

Ratiba Hadj-Moussa: "The Undecidable and the Irreversible: Satellite Television in the Algerian Public Arena"

Tamar Liebes-Plesnar: "The Voice of Jacob: Radio's Role in Reviving a Nation"

Asu Aksoy and Kevin Robins: "Turkish Satellite Television: Towards the Demystification of Elsewhere"

Charlotte Brunsdon: " The Elsewhere of the London Underground"

Marita Sturken: "The Image at Ground Zero: Mediating the Memory of Terrorism" 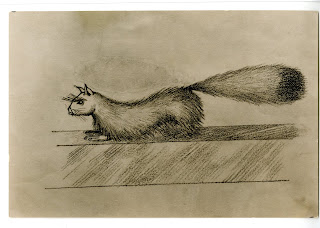 My contribution to the volume concerns the story of a family on the Isle of Man that, in the early 1930s, claimed to have befriended a "talking weasel" named "Gef" on their farm near Peel.  "Gef" became somewhat of a minor celebrity in the British press and eventually attracted the attention of England's premiere "ghost hunter," Harry Price.  As an indirect result of Price's inquiry into Gef's existence, the weasel wound up at the center of a libel case involving the BBC and presented to the High Court in 1936.  The account presented in Electronic Elsewheres is a shorter version of a chapter that will be in my forthcoming book on delusional media.


More info can be had at: