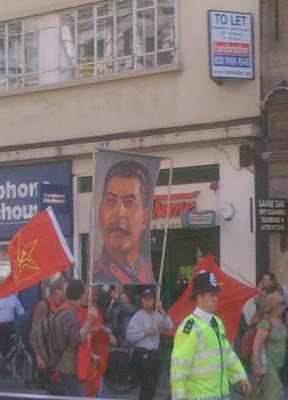 I just returned from London where I was speaking at a conference on the Undead. Three items of interest from the trip:

Walking through the Holborn area on May 1st, I happened upon the annual May Day Parade through central London. As orthodox Communist protests go in the early 21st century, it was an extremely impressive spectacle. Luckily, I was with a London resident who was able to identify the various factions involved, and whom needed to be separated from whom. The parade was unexpectedly dominated by Turks and Kurds who apparently use the streets of London to conduct their homeland ideological/geographical warfare by proxy.

The entire affair seemed rather quaint in its own way--rather like a walking museum of the Left's greatest hits; that is, until the Stalinists showed up. Incredibly, two groups (admittedly smaller ones) passed by with placards of Stalin. I snapped this particular photo as Stalin and his dwindling minions passed by the local Krispy Kreme donut emporium. I was tempted to ask them their "take" on Stalin. Misunderstood? Didn't go far enough in instituting his "reforms?" In the end, however, it didn't seem worth getting in a shouting match. And really, I was probably less appalled that they supported Stalin than I was amazed that they didn't realize what holding up a Stalin sign would signify to the crowd.

Interestingly, the main topical issue of concern in the parade was the current economic crisis and the bailout of various global financial concerns. In this, the Marxists (Stalinist and otherwise) were in complete agreement with the far fringes of the American right--an alliance that Marx himself (or at least Gramsci) would have found both interesting and potentially useful.

On BBC-3, meanwhile, a new "makeover" show has hit the airwaves that adds a novel twist to the genre. Snog, Marry, or Avoid seeks out women (and on rare occassions, men) who suffer a most particular form of "bad taste," dressing like extremely OTT (over-the-top) bar trash. The humiliation begins with producers showing a picture of the woman to random men on the street and asking them if they would "snog" (British slang for anything from "making out" to a one-night stand), marry, or avoid the girl in question. Of course, the women all think they are excellent candidates for snogging and marriage, but cruelly discover most men choose to ignore them for their "massive fake tits" and "hooker make-up." In what is apparently an even more humilating quiz, men choose if they would buy the girl "jewelry, dinner, or a kebab." From the reaction of the humiliated women, having a man buy you a "kebab" is apparently one step away from tipping a prostitute.

The woman then faces POD (Personal Overhaul Device)--a futuristic camera lens accompanied by the disembodied voice of a most proper English woman who assesses the woman's look and continues the insults. Recommendations are then made, not for a "make-over" but a "make-under"--an attempt to transform the woman's trashy "fake" look into something more "natural."

The best part of the series is that it comes from the BBC, and truly, the producers do approach the show as if they are fulfilling a public mandate by ridding the nation of some form of noxious pollution. But the show also--to continue the Marxist theme--demonstrates that there is nothing more enjoyable on TV today than passing judgement on the inability of others to successfully negotiate the codes of "proper" consumption. 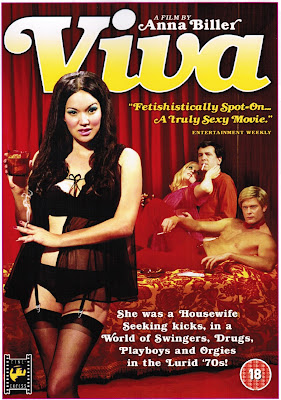 The highlight of the trip, however, was the opportunity to see Viva, a remarkable new film by L.A. based artist Anna Biller. The film lovingly recreates the look, feel, and logic of sexploitation cinema at the threshold of the industry's move into hardcore--that strange moment when adult cinema still couldn't show explicit sexual activity and so displaced it into a weird world where everyone is a swinger and all anyone ever talks about is screwing. Entertainment Weekly describes it as "Fetishistically Spot-On...A Truly Sexy Movie," which is exactly the stupid shit you would expect a cub reporter at Entertainment Weekly to say when confronted with full frontal nudity, no matter how archly presented. Actually, the film is less about carnal lust than cinephilic desire. Without really referencing Joe Sarno, Doris Wishman, or Herschell Gordon Lewis explicitly, Biller has nevertheless recreated with an almost uncanny accuracy the dialogue, mise-en-scene, lighting, blocking, and narrative logic of the era (to the point of even lighting the film's many outdoor pool scenes with high-key three point lighting). In fact, the retro-verisimilitude is so perfect that had the negative been dragged across the floor a few times (a la Tarantino/Rodriguez's Grindhouse), one might be easily fooled that Viva was really made in 1972.

There's a subtle political critique at work across the film about the genre's foundations in an often retarded form of male fantasy (brutish breast manipulation is a recurring theme). But what makes the film special is its apparent affection for the truly bizarre look and logic of these films, which even then were probably more about conspicuous leisure than conspicuous copulation--a point made as the eponymous Viva spends her private time in the bathtub leafing through interior design magazines.

The trailer can be seen here: http://www.youtube.com/watch?v=8G9DeyG9R80