Bodies Without Organs or Butts

When psychiatry's most famous schizophrenic, Daniel Schreber, was in the depths of his most acute psychosis, he began to believe that certain parts of his anatomy had become compromised or were completely absent. At various moments he believed that he lived without a stomach, lungs, or bladder, that his ribs were crushed and his larnyx "eaten out" by some nefarious force. Such delusions about body parts are common in psychosis, leading the DSM-IV to produce an entire diagnostic category for such ideation: the somatic delusion.

Digging through some used books recently, I found a title that would catch the eye of any boy aged 8 to 80, The Day My Butt Went Psycho. The book, it turns out, is the first in a "butt triology" written by Australian kid's author, Andy Griffiths. The series has apparently been extremely successful in its explicit mission to give young boys a reason to quit playing video games and pick up a book. Wikipedia describes the plot: 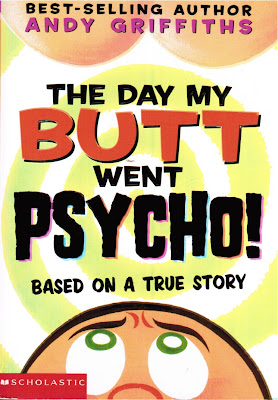 Zack Freeman's butt is constantly detaching itself from his body and running off. One night, when he follows his butt, he learns that there is a plot by butts to take over the world. Specifically, the butts plan to create a huge, world-wide fart by building up a massive quantity of methane gas in the "Buttcano". When the Buttcano blows, all humans will be unconscious. While they are unconscious, the butts will seize their chance and switch places with their heads.

*What exactly are the links between the "magical thinking" of infantile narcissism and the psychotic delusions of adulthood?

*Is the Scholastic Book Service, fresh from transforming a generation of kids into future witches, now turning its attention to cultivating the next wave of schizophrenia?

*Can young boys be compelled to read only if it involves some strange mixture of Dadaism, paranoia, and the abject?

*How exactly would a cadre of rebellious butts "switch places" with our heads, and if they did so, what would become of our heads? What would replace our former butts?

I can't say that I will ever read The Day My Butt Went Psycho, but I am happy to file it next to my copy of Schreber's Memoirs of My Nervous Illness. Both are guides to logics wholly alien to the putatively rational mind--the sophomoric and the psychotic.
Email Post
Labels: Books Psychosis Regressive Phenomena