ABC's thoroughly noxious drama of class preening, Brothers and Sisters, has just completed another season. In honor of its continuing excellence in chronicling the trials and tribulations of witty, white, rich Californians, I'm reposting here a piece that originally appeared in the UCLA student e-journal, Mediascape. 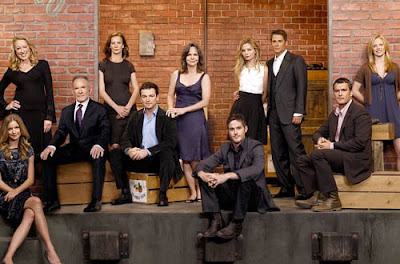 In my opinion, with so many problems facing the world today, having an interest in comedy is politically irresponsible, perhaps even a bit morally reprehensible. As Graydon Carter famously proclaimed in the wake of 9/11, there is no place for irony in the new century. Everyone enjoys a good laugh, certainly, but with a nation at war, the economy in shambles, and the polar bear recently added to the list of endangered species, we have entered an age when only television drama-serious, important, and earnest television drama-can adequately address the complexities of life in America today.

That's why I'm so appreciative of Brothers and Sisters, ABC's recent hit series about the Walker clan-a proud family of vintners headed by matriarch Sally Field. After the tragic cancellation of Studio 60 on the Sunset Strip, the nation worried if there would ever be another series up to the challenge of giving voice to the rich, white, highly educated, and extremely loquacious of Southern California. Thankfully, a plucky band of writers and producers has looked deep in the well of universal American experience to give us Brothers and Sisters, which as you can tell from the title, is a family melodrama.

The rest of this piece can be read on Mediascape.
Email Post
Labels: It's Academic Regional Conflicts The TV