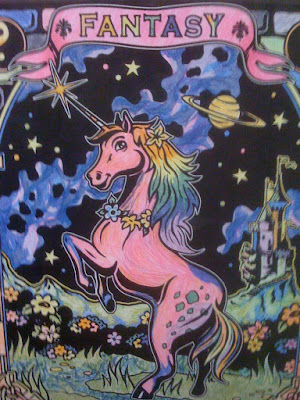 Even the most ferocious critics of psychoanalysis have to admit there is something perverse about little girls and unicorns--or more to the point, that there is nothing at all perverse about this relationship inasmuch as it signals all the component instincts converging on their "proper" goal of hetero-genital sexuality. Like Bobby Sherman, David Cassidy, and the Brothers Hanson and Jonas, the unicorn is a mythical animal that doesn't really exist, at least not in a way that would have any real implications in disrupting one's latency period. Wiki tells us that Leonardo da Vinci once wrote the following about these beasts: The unicorn, through its intemperance and not knowing how to control itself, for the love it bears to fair maidens forgets its ferocity and wildness; and laying aside all fear it will go up to a seated damsel and go to sleep in her lap, and thus the hunters take it. Who in the early seventies didn't wish David Cassidy might fall asleep in their lap?

Still, there is something a little disturbing about this particular image, a poster that invites kids to finish it by applying the proper magic-marker colors. Of course, there is the simple irony of an ode to "fantasy" that encourages children to obey all the rules of a coloring book. Here is a mass produced template to practice how creativity and fantasy are done. Then again, I'm told kids actually like to follow rules, so perhaps this should be regarded more as a disciplinary technology than as a first art-school project (not that those identities can't intersect once again later in life).

If the unicorn remains the displaced libdinal object of choice for the girl-identified swingset crowd, what is more disturbing is this creature's bizarre ability to persist outside of history. The "fantasy" proferred above is a strangely antiquated pastiche of a mythical creature, medieval astronomy, Victorian pastoralism, and good old-fashioned monarchism. What does it say about the world of fantasy (and phantasy) that our youth are still inculcated in this bullshit in the 21st century? And, in all fairness, the androcentric obsession with the medieval, from Lord of the Rings to Black Sabbath, is not much different--an equally phallic phantasy life projected deep into the netherregions of European history. Small wonder that Renaissance Fairs have become, along with Star Trek fandom, a powerful emblem of adult regression, a world where the sexes engage in highly coded play-acting designed, precisely like "courtly love," to go nowhere--above the frock or below it. "Thou art a comely lass" is a phrase with layers of plausible deniablity attached to it, a sexual overture so ritualistically displaced as to insure that no one could actually take it seriously.

The unicorn invites us to interrogate whether the foundational structures of phantasy/desire do indeed exist on some other terrain--historical and psychical--or instead if these structures are simply hostage to a rote replication of children's culture from century to century. At this point in history, why should any child even know what a unicorn is, much less desire to color one in as a celebration of "fantasy?" Aren't there other things for children to fantasize about, things that might be more in-line with our own contemporary moment? Or failing that, with at least some early iteration of modernity? Perhaps adults, in remembering what they enjoyed as children, simply keep passing down the same tired fantasy world from generation to generation. Then again, I doubt there are many 10-year olds out there today listening to Bobby Sherman, so perhaps the unicorn does have some privileged hold on the pre-pubescent unconscious. This splitting would be significant in and of itself--a terrain of pop-desire that is slavishly tied to reigning historical codes of the cool and the cute, and another that seems to be the product of some weird spell Merlin cast over early adolescence hundreds of years ago.
Email Post
Labels: Commerce Magical Thinking Regressive Phenomena