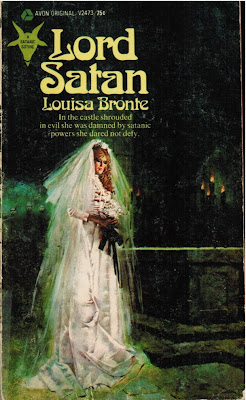 Many readers of Jane Eyre finish the novel thinking Rochester is pretty much still an asshole and deserves his bum leg and blindness. Bronte tells us he recovers his sight in time to see his first child, but I'm sure many still prefer imagining him wandering around the house befuddled and completely at Jane's mercy.

Men would remain assholes in the twentieth-century, of course, allowing Charlotte Bronte's basic architecture in Jane Eyre (naive young girl + older sophisticated man + mysterious presence in the house = lust/fear/loathing/passion) to inform all manner of popular romances. Jane Eyre was remade about 50 times in the old studio system, from Hitchcock and du Maurier's straight-forward copy in Rebecca (1941) to Val Lewton's horror-inflected I Walked with a Zombie (1943).

The remakes of Jane Eyre often make the Rochester character a bit more sinister--the original's constant brooding amplified into a creepier, more murderous menace. Pictured here is a version that goes for broke, transforming Rochester into what many always believed he was anyway: Satan. Published by Avon press in 1972, Lord Satan does little to disguise its relationship to Jane Eyre, even attributing the manuscript to a "Louisa Bronte," who one assumes the reader is supposed to take as a distant relative of some kind, perhaps even a long-lost fourth sister. All the elements are here for the titillation that comes with fantasizing about courting a mysteriously threatening (and possibily half-goat) man: the 17-year-old Adrienne, "Lord Satan" himself, and the apparent ghost of Lord Satan's mother wandering the halls of "Castle Caudill." As in the original, much of the book would appear to involve Adrienne attempting to understand the mysterious personal and domestic relationships around her. Despite her marriage to a man known as LORD SATAN, Adrienne is unsure if her vivid memories of satanic rituals and black masses are real or only dreams. Eventually she begins to suspect her husband (again, LORD SATAN) might be a witch. Plucky Jane she is not, it would seem.

Perhaps such a bizarre transposition of Jane Eyre was inevitable, especially in the early 1970s when Lucifer was riding high on the popcult terrain. The Exorcist wouldn't be out for another year, but Anton LaVey's Church of Satan in San Francisco had, by 1970, already revived a genre pretty much moribund since Joris-Karl Huysmans' La-Bas (1891). On the other side of the Gothic's softer than softcore romances, Satan was enjoying a spirited revival in the adult film/book industry as well (including such memorable porno-rags as Bitchcraft and Nudity in Witchcraft).

If you look closer at the cover of Lord Satan, however, there is a small logo indicating the book is not a singular offering to the Dark One but is actually part of a series. It is, Avon proudly trumpets with a goat-head stamp, "A Satanic Gothic." I'm not sure exactly how many of these Avon published, but I have found listings for at least three more titles: Island of Fear (1973), The Twisted Tree (1979), and The Mark of the Rope (1972).

Gothics are notorious for the specificity of their branding--but "a Satanic Gothic?" As the current Twilight series demonstrates, fantasizing about vampire sex is now acceptable even among teenagers (as it was in the late 60s' with Dark Shadows). But Satan? Would a mainstream press have the horns to publish such a series today? Probably not--and we are poorer as a culture for the absence of such a possibility. Some regard Studio 54 or Plato's Retreat as the ultimate emblems of sexual excess in the 1970s. But what could be more truly perverse than teen girls and housewives going to the corner drugstore and buying a mass market book to indulge the more occult dimensions of their desire, stories that use the soft-focus plotting of the gothic romance to encode our culture's ultimate master/slave story?
Email Post
Labels: Books Gothic Satan