Bad Credit: The Next Generation 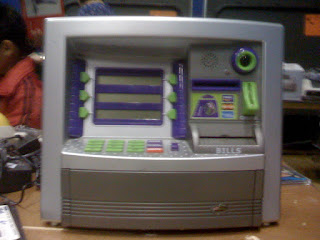 I don't have any kids, but I've been told by those who do that at a certain age children want to do everything their parents are doing. I assume this is the age most girls get "life-like" baby dolls foisted on them, so they can better imitate Mom/Dad as they attend to a newer addition to the family. It also explains such counter-intuitive toys of labor as lawn-mowers, vacuum cleaners, and EZ Bake ovens.

The toy pictured here, however, truly seems to be the example that unravels the entire genre. Bad enough kids learn to internalize anxiety over unkempt lawns and collapsing soufflees before hitting grade school--now they apparently must also practice for their destinies as overdrawn ATM jockeys. 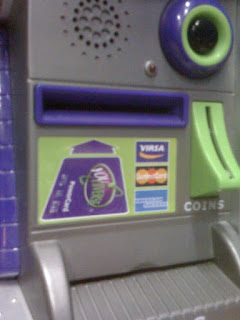 Particularly alarming here, seen in the close-up detail, is the simulation of various recognizable credit overlords ("Virsa"), all the better to train children in the iconography of their adult servitude. Ostensibly this is a "piggy bank" updated for the 21st century (note the coin slot)--but notice also how a fake (one assumes) camera eye watches the child as s/he places the allowance money into the terminal. What better way to introduce pre-schoolers to the harsh reality that money, credit, and video surveillance are but competing mediums for disciplining the fully functional deadbeat adult sujbect? It's also a great way to open a dialogue with your child about crime--"that camera is there in case bad people carjack daddy and steal his ATM card."