Does a Bear Wipe Its Ass in the Woods? 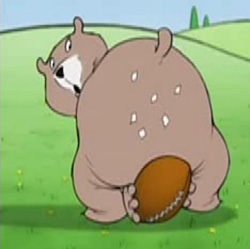 Honest to God, when will this ad campaign end? How much longer are we expected to encounter --with absolutely no advance warning--the abject spectacle of bear dingleberries on television?  Which is more horrifying: bear dingleberries themselves or their use to motivate such anthropomorphisized treacle in an ad campaign?  If we're going to turn this nation into a socialist hellscape, shouldn't we begin by first rounding up the captains of consciousness that would have me smile sweetly to myself over the plight of a cute little bear with toilet paper stuck to his ass?  Wouldn't we all benefit from the nationalization of the toilet paper industry?  Wouldn't you rather pick up a month's supply at the post-office or some other governmental dispensary rather than be confronted with the nightmare of contemplating this disgusting collision of bear fur and bear shit?  How is it that we created a world where it is still generally taboo to say "shit" on television, and yet we have no problem with televised animation that pretends to displace this scatology only to render it all the more real through the cloying excess of the displacement?

On the mayonnaise front, meanwhile, Miracle Whip bought time in every commercial block of The Colbert Report last night to "fight back" against Colbert ripping on their campaign to make Miracle Whip "cool" to twenty-somethings who have lost a taste for this long-standing symptom of Protestant repression.  "We are Miracle Whip, and we will not tone it down," says their douche-dude annoucer as this hipster girl thrusts the product into our as always "behind-the-curve" faces. 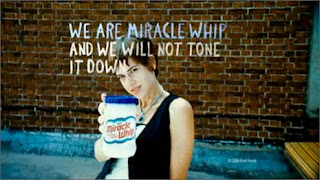 The (faux) irony spiral here is truly vertiginous.  Boring old product pretends it is being suppressed by some Footloose-like alliance of abstracted adult authority so that it might reposition itself in a mass Jedi mind-trick as the crucial ingrediant for spicing up a grafitti flashmob or boho gallery opening--met with inevitable ridicule by television's foremost practitioner of ironic reversal--resulting in a type of "integrated" advertising (Colbert acknowledged the ad buy in his opening bit last night) that pretends to be "disintegrated" by directly addressing Colbert himself in the hopes that his "nation" will find it cool that Miracle Whip has a kid on staff who "gets the joke" and can turn this potential setback into a positive--unable to grasp, apparently, that the demo they seek, the demo watching Colbert, will never put itself in a position to side with Miracle Whip over Colbert as a hip commodity, that the very effort to make itself hip by feigning allegiance to Colbert's sensibility through ironic combat can only result in ever-escalating ridicule.
Email Post
Labels: Bio-Horror Commerce The TV Troubling