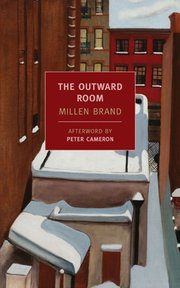 Haunted by the trauma of her brother's death, a young woman who has spent seven years in a mental hospital decides one day to escape and go to New York City.  It's the middle of the Great Depression, and much of the first part of the book is a compelling account of what it was like to survive in the 30's Big Apple when down to your last five dollars.  The second half is a "romance," of sorts, but it is a courtship anchored in the gritty realities of economic deprivation and emotional instability rather than fantasies of love-at-first-sight and magical paths to upward mobility.  Championed in its day by Theodore Dreiser and Fannie Hurst, The Outward Room actually found a wide readership in its era (with the help of the Book-of-the-Month Club).  But, as Peter Cameron notes in his introduction, Brand's book is yet another example of a promising first novel now long forgotten.

Those with an interest in the history of labor and unions might also be interested in a secondary plot here that links the machine shops of New York and the coal mines of West Virginia.
Email Post
Labels: 1930s naive girl + big apple New Yorkitude not bad-pretty good in fact nyrb psychiatry Psychosis romance