Annie Greenson is a high school librarian working in Manhattan.  As we open, she is giddy with excitement that the school year is finally over and summer is on its way.  But this will be a very special summer, the 29th summer, the last summer before Annie turns 30 years old.  An early visit to her mother in Brooklyn puts the major issue in focus: why can't Annie find a good man, settle down, and produce a grandchild or two? 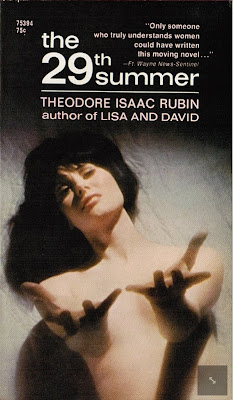 As this is the 1960s, modern and semi-liberated Annie tries not to let this burden dominate her psychic life.  But her mind keeps returning to men, especially the "earthy" part of her mind, which occasionally goads her into the empty practice of self-gratification.  She has a friend, Karen, and together they complain about the scarce availability of decent men in the Big Apple.  Sometimes they go to the movies together--mostly they just complain over the telephone.  At one point she swears off thinking about men entirely--deciding instead to reacquaint herself with the city's many art museums.  She goes on a couple of boring dates that lead to boring sex with a guy name Jerry.  There's also a guy named Larry--the one man with whom she actually felt "chemistry," but who mysteriously disappeared after their brief holiday together.

If Rubin's name sounds familiar, perhaps it is because he is a practicing psychiatrist, former President of the American Institute of Psychoanalysis, and the author of several popular books in genre of self-help/psychology--including The Angry Book (1976), Overcoming Indecisiveness (1985), and Real Love What It Is and How to Find It (1990).   His best known book, Lisa and David (1964), has been adapted for the screen twice.

The 29th Summer speaks to this professional lineage.  The story of Annie's summer unfolds like details recovered and remembered on the couch, suggesting this work of fiction has its roots in one or more of Rubin's patients.  And if nothing else, you have to admire Rubin's audacity--not every man would take it upon himself to narrate a woman's sexual interiority, even one who listened to such thoughts on a weekly basis.  Should be of interest to anyone who reads psychiatric case histories or is looking for yet another account of the 60s "sexual revolution."
Email Post
Labels: 1960s New Yorkitude psychiatry sexology what girls think about