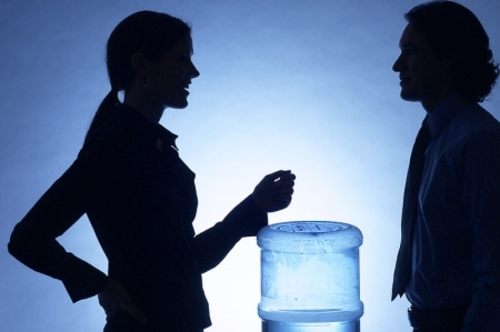 How many times has this happened to you?  It’s the day after a big episode of television show X.  You’re standing around at the copy machine or water cooler with some co-workers.  “Did you see what happened on television show X last night?” you say to the group, knowing that most everyone in this circle watches and enjoys television show X.    “Yes!” exclaims a co-worker, “I couldn’t believe it when….”
“STOP!” yells another in the circle, seemingly in a state of panic.  “It’s on the DVR but I haven’t watched it yet.”
The conversation grinds to a halt.  Everyone sighs and stares listlessly into the swirling galaxy of creamer in their coffees, or mechanically shuffles papers in silence to put in the copier.  “Nice weather we’re having,” someone offers.
How did this state of affairs come to exist?  How is it that those of us who simply watch television as television ended up deferring so quickly and definitively to the TV-tardy generation?   As TiVO and then more generic forms of DVR technology spread through the marketplace, why did the broadcast generation so eagerly accommodate those who prefer to watch their programs in weekend marathons of digitized fast-forwarding?  Why is it impolite to "spoil" a show by revealing plot information, and yet not impolite to force a larger group of people to clam up during a spontaneous discussion of said plot?
These are perplexing questions, to be sure.   At first this deference was perhaps simply techno-intimidation.  In its earliest days, TiVO marketing (and TiVO owners) enjoyed making the non-time-shifted feel as though they were slaves to the manipulative agenda of network puppeteers.  To watch broadcast television when it was actually broadcast was to admit you had nothing better to do, that you let television rule over your life rather than taking charge of the technology itself.
As the years have passed, however, we can now see that this was an utterly ridiculous proposition.  Who is more enslaved by television: the person who tries to make it home in time for Modern Family, but if he misses it just does something else with his time; or the person who loads up a brace of Modern Family’s that have to be “cleared” from the DVR, maybe over Thanksgiving or after the spring finale?   For me, there is no sadder sight than an otherwise young and healthy individual hunched over a laptop watching something like The Jersey Shore, trying to “catch up” with a program that God intended us to watch by accident while channel-surfing from the comfort of the couch.
I suppose this impulse can be defended in those who watch serial narratives, an audience that would be devastated to miss even a second of the complete storyline (unlike viewers of old who, if they missed an episode, caught up in the first five minutes of the next installment and simply carried on).  Like so much of what has gone wrong with contemporary television, we can blame much of this on Twin Peaks, the series that probably did more than any other to ensure that the college educated would feel an obligation to view every moment of every single program and somehow still think they were smarter than the cathode tractor-beam that had just transfixed them for upscale target practice.
Many are happy that television is now often afforded the status of “art” in the same way as the cinema.  But I’m not so sure this has been a good development inasmuch as it has destroyed the pleasures of quotidian disposability that were so long a part of the medium (like being able to engage in casual day-after conversation about an episode without someone freaking out that you’re about to read Molly Bloom’s soliloquy aloud before they’ve had a chance to buy their copy of Ulysses). 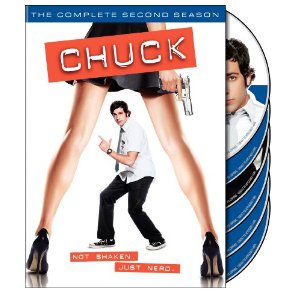 The “artification” of television has gone hand-in-hand, of course, with the industry’s amazing success in convincing otherwise intelligent people that they should buy multi-disc DVD/Blu-Ray copies of a television series in its totality.  Sure, Captain DVR has disrupted the imperious power of the network schedule—only to then get ensnared through appeals to art, quality, and archival depth so as to drop a few twenties on a deluxe boxed-set.   All the old NBC wanted was my time and eyeballs—but the new Comcast/NBC/Universal wants me to think I have a responsibility to own the complete run of Heroes, neatly filed away alongside hours and hours of other forgettable shows that in an ideal world would remain elusive and ephemeral.  Why anyone (other than a media teacher, of course) would go to the trouble of brushing off a box set of The Simpsons in order to watch a specific episode rather than simply allow Homer, et al. to pop up as a welcome surprise during unfocused leisure time is a true mystery.  It’s rather like keeping bottles of tap water in fancy bottles even though the faucet remains completely functional.
Some might argue the box set is a good way to catch up with an important series one has missed—but even here, I would suggest it is enough to know that Series X will undoubtedly return, like a comet, and that arriving at that welcome rendez-vous in an unspecified future will make the eventual viewing of the series much more pleasurable than burning through it in an obligatory 22 hour marathon.  I can’t think of anything currently on TV, or indeed that has ever been on TV, that I would absolutely HAVE to see RIGHT NOW.
This stockpiling of episodes—either on DVD or on the DVR-- is especially nonsensical and even a bit depressing when it involves programs that were designed to be wholly disposable in the first place, shows like Storage Wars, Kendra, Hoarders, and House Hunters that work best as random encounters with sporadic time-killing.   Indeed, if you like a particular show in one of these formats, wouldn’t it be better to keep a few in the quiver?  That is, rather than systematically make sure that each and every episode has been accounted for in the DVR queue, wouldn’t it be more rewarding to allow for a few strays to escape as breeding stock so that they might unexpectedly return sometime in the future?  Incredibly, I actually encountered an episode of Seinfeld the other day that I had somehow never seen before.  It was a profound, moving, and even magical experience, akin to necromancy or time-travel, and a pleasure that the DVR’s mandatory efficiency in consumption makes increasingly rare.
Many have bemoaned how cable (along with an armada of other technologies) has led to a balkanization of public culture and the centripetal hardening of “egocasting” as the new media sensibility.  This fragmentation is inevitable, no doubt, and I am certainly not nostalgic for the days of 3-Network pseudo-consensus broadcasting.  But, in a world where increasingly you only share film, television, and music choices with a very narrow cross-section of your demographic, how frustrating is it when one slothful DVR-owner can singlehandedly bring a discussion to a halt?
Here’s a good rule of thumb in television: if you can’t be bothered to make the time to watch a show on the day it actually airs, if the idea of watching a particular show isn’t something you actually look forward to enough to plan your precious leisure time around it, then it probably isn’t all that important to you in the first place.   Television is so relentlessly of the present and moving ever onward into the future, why would anyone go back in time to resurrect an experience so demonstrably unimportant?
That’s why I think those who still have affection for the flows and rhythms of broadcasting as broadcasting should quit being so deferent and polite in this conflict.  I’m tired of feeling like a public masturbator simply because I bothered to sit down and watch Revenge on the night it was actually airing.   If you feel the same, then take the vow to discuss whatever you want, whenever you want, and let the TV-tardy assume the responsibility of shunning human company until they feel “caught up” enough to contribute to the basic social cement of televisual “small talk.” After all, we never had a vote on which way this social convention was supposed to go.
Email Post
Labels: Commerce Deadish Media Deviants and Delinquents Kids on my Lawn The TV