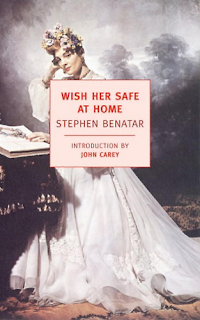 This book apparently has somewhat of a "cult" status attached to it, maybe because author Benatar originally self-published the manuscript and sold it on the street.  In this edition, the introduction is written by John Carey, who in 1982 was the lone voice advocating that the book advance for consideration for the prestigious Booker Prize. Carey counts his fellow committee members' adverse reaction to the book as a testament to its power.  That may well be, although I have another theory as to why certain readers might bristle at this book.
But first, the basic set-up: Rachel Waring is a 40-something virgin working as a bureaucratic functionary in London.  She has lived there with her flatmate Sylvia for just over a decade.  Unexpectedly, Rachel inherits her long-lost and perhaps insane aunt's house in Bristol.  After touring the property and town, Rachel decides to make a clean break of her old life so that she might re-invent herself as a creature of leisure and beauty.  What follows is a rather excruciating account of hypomania gradually turning into psychosis, narrated entirely in the first person by Rachel herself.
If Wish Her Safe at Home were just the story of one's woman crack-up, it would be less than remarkable.  But Benatar complicates matters by destabilizing all the characters that surround Rachel as she grows increasingly unbalanced.  Refracted through Rachel's increasingly distorted psyche, the motives of her new neighbors become increasingly nebulous--do they think she's merely eccentric? Are they trying to exploit her advancing madness?  Or are they simply clueless and baffled?
Carey is right that the book is genuinely disturbing.  Let's face it, few can remain wholly unaffected by a convincingly narrated chronicle of a slow slide from the putatively normal to the full-on psychotic.  A good writer can make that "transition" seem just a little too easy and even (gulp) relatable--which is exactly what Benatar does here.  Carey also extols the book as being truly "original" in that it doesn't follow any of the "dozen or so" plots common to all literature.  I'm not sure about that.  The Turn of the Screw comes immediately to mind, as does Polanski's Repulsion.  NYRB Classics has also published a rather nasty account of a descent into male psychosis with The Diary of a Rapist (1966).  In fact, the novel of gradual mental disintegration seems fairly common by now.
As to why the rest of the Booker Prize committee was reticent to advance this novel, that may have to do more with gender politics than the ingenuity and talent of the writing.  As we follow Rachel on the Havisham express, we gain increasing insight into the childhood roots of her illness.  Particular weight is placed on a failed attempt at coitus when Rachel was 20.  After dating a boy for a few weeks (her only boyfriend ever, we learn), the two end up in the backseat of his car.  Just as Rachel is about to lose her virginity and finally "become a woman," the boy ejaculates prematurely on her thigh.  Machinations by her evil mother prevent the two from seeing each other again for several months, by which time the boy is now engaged to someone else.  Ruminating on this event some twenty years later, Rachel is haunted by the fact that--not only did she not lose her virginity--she never got a chance to "touch it" or even "see it"--"It" being his penis.
While I admire Benatar's courage in attempting, as a man, to write a first-person account of a woman's psychosexual disintegration, I can also imagine how a panel of literate critics--at the dawn of the Lacanian 80s no less--might take exception to such an unapologetically phallocentric figure that doesn't actually make it into the carpet, so to speak.
Email Post
Labels: 1980s going bonkers has ambition judged exceptional nyrb Psychosis UK what girls think about