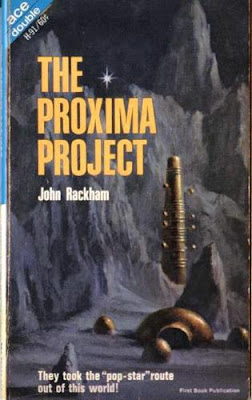 This appears to be science-fiction aimed at youngish to middle-aged men of the 1960s uncertain about the era's emerging counter-culture.  As we open, Horace McCool has decided to quit his lucrative job in the family's financial business.  Having heard and seen (in stereophonic 3-D) a music performance by the world's hottest pop band, "The Trippers," McCool is completely smitten by the band's enigmatic lead singer, "Yum-Yum."  He is leaving his job so that he might meet Yum-Yum and make her his bride.  We expect that this apparently psychotic act will eventually be explained as a form of techno-hypnosis or space madness, but it turns out just to be lazy exposition--the book needs Horace to go find Yum-Yum, so that's what he does.

McCool is aided in his quest by his faithful secretary, Ms. Horne, whom he tasks with finding as much information as possible about Yum-Yum and her band.  Ms. Horne is happy to do this because she is also a "Trippers" fan and has a thing for their male singer, Jim.  Sneaking backstage at a Trippers concert, McCool cuts to the chase and asks Yum-Yum to marry him without so much as a formal introduction.  The band is amused, but not cruelly so, and Yum-Yum lets him down gently (even after McCool explains to her--the world's most famous pop star--that this whole "music" thing can't last forever).  But McCool will not be dissuaded.  He sends Yum-Yum an expensive broach, which the other band members quickly realize is actually an audio-visual "bug." She politely returns the gift.

But McCool gets an even better lead.  He learns that the band plans to take a sabbatical at a remote lunar resort.  If he can spend that time with Yum-Yum, he reasons, he is sure he can finally win her over.  With Ms. Horne in tow, McCool makes the journey to the moon and--after a bit of hide-and-seek--ends up in The Trippers' lunar compound.  Here we gradually learn more about the band.  Something is slightly "off" about them.  For one thing, they all appear much younger when off stage, mere children really.  We also learn that they made a group decision at the age of 11 to become the most successful pop stars in the world, and then worked rationally toward that goal until it was achieved.  Soon we are in Children of the Damned territory as we realize the band are actually super-advanced beings (albeit still human) who decided very early in life that the earth could not contain their desires and ambitions.  Incredibly, their decision to become fabulously wealthy as a rock band is in service of another, more astounding goal: they seek to build a spaceship and leave the solar system!

As it so happens, McCool and his secretary have arrived at the fateful moment of the band's final departure for the Centauri system.  But McCool thinks they are bluffing.  There is no way five teenagers could have mastered the science and technology of interstellar space travel.  But the band tells him (and Ms. Horne) that they only have ten minutes to decide--if they don't leave the compound (which is actually the spaceship), they will soon be embarking on a journey that will last at least ten years.  Moreover, the Trippers might even decide not to come back at all!  Partly because of his infatuation with Yum-Yum and partly because he can't admit to himself the kids might actually be telling the truth, McCool (and Ms. Horne) remain on board.  Wouldn't you know it, the kids aren't lying.  Soon they are blasting off for regions unknown!

From here McCool and the kids debate some points of generational philosophy as they make their way across the galaxy.  Gradually McCool begins to realize that Yum-Yum is some type of pre-asexual genius weirdo  child, and his affections turn instead toward the more mature and voluptuous Ms. Horne.  Eventually the space party realizes they will be unable to return to earth, and most likely will die in orbit of Alpha Centauri.  But then, just when all is lost, they are greeted by a flotilla of alien spacecraft.  As it turns out, they have arrived at Centauri just as the locals are holding a festival that seeks out and honors "first spaceships;" that is, this super-advanced race likes to scout out and collect the first spaceships that visit their star system from other worlds.  The aliens honor McCool, Horne, and the band with an elaborate celebration.  To his great embarrassment, McCool telepathically reveals a momentary twinge of lust for his sexy green hostess.  The Trippers, meanwhile, decide to put on a show of their greatest hits, a performance that is a tremendous success.  These Centauri aliens can not get enough of the Trippers happening sounds.

As McCool and Ms. Horne watch the Trippers perform from backstage, wondering if they'll ever get back to earth, they are approached by an "older" alien.  Recognizing that McCool is also the older and more wise of the human party, this alien wants to talk business.  Soon, the two have worked out an interstellar business arrangement.  McCool will trade the music of the Trippers for access to Centaurian technologies that he can market on earth.  The Trippers agree to the scheme as they have no desire to return to earth anyway.  There is only one thing left for McCool to do--marry Ms. Horne.

So, in the end, this hybrid of Children of the Damned and Wild in the StreetsMcCool begins as a success in the "straight" world, flirts momentarily with the superficial trappings of youth culture (and their anti-materialist blather), but ends up happily married and with even more money.  Generation gap addressed and solved!
Email Post
Labels: 1960s ESP/telepathy hippies musical evil sci-fi