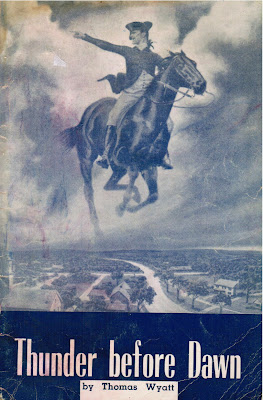 In Thunder Before Dawn, we have a document that confirms all the worst stereotypes about Red Scare hysteria of the 1950s.  Here Christianity stands as the last remaining line of defense against Communism, and in keeping with the apocalyptic paranoia of the right, the end of both nation and world is once again imminent.  Communism's greatest threat, we are told in the introduction, is a "mongrelization of the races...They would have the three races (the Caucasian--white, the Mongolian--yellow, and the Negro--black) intermarry until no distinct race remains, and a mongrel race is developed."  Happily, Jesus has created a "fourth race," a race of "believers" who respect the divisions of white, yellow, and black.

From there it's your standard rant about nation and world turning to crap.  Here are some choice lines:

"Despite all wishes to the contrary, the rising generation does express something of the spirit of the Anti-Christ, the lawless one, and the immoral conditions everywhere present is leading us to another Sodom and Gomorrah."

"Millions of drunken, cursing, pleasure-mad women are destroying the last bulwark of civilization. That which some term 'the liberation of womanhood' is Satan again seducing Eve to bring the whole human race down to its last, lowest, level."

"Why is there so much questioning about our foreign policy?  Why are taxes and national indebtedness reaching proportions that threaten our entire economic system?  Why do we try so desperately to make peace with Satan?  Why? why? why?"
Email Post
Labels: 1950s author demonstrably insane eschatology mind control religion wingnuts