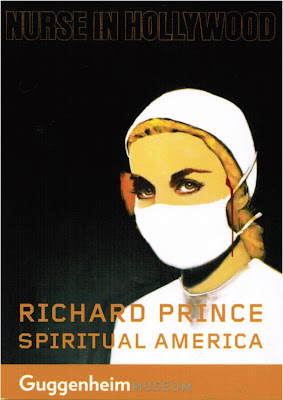 One of the rewards of hoarding old and strange books is that every so often you hit accidental pay dirt.  On the surface (or, if you will, judged by its cover), Carl Sturdy's Unlicensed Nurse (1939) would appear to be just another title in the many “nurse” stories that have proven such a staple of the romance industry.  Most of these are about a young nurse, freshly minted from nursing school, who takes on a new and unusual assignment (to my knowledge, they rarely if ever simply take a job at a “normal” hospital).  The nature of the assignment typically gives the novel its title: Night Club Nurse (1965), Debutante Nurse (1958), Prison Nurse (1962), Television Nurse (1968), and Ice Show Nurse (1970) are but a few of the more colorful assignments (a truly impressive collection of 300+ titles--cover and synopsis--can be found here). There was also a product line aimed at teens centered on nurse Cherry Ames, as well as a few books featuring the adventures of various “Candy Stripers” (and if ever there were a burlesque act waiting to happen, it would be "Cherry Ames and the Candy Stripers").

The plots follow a standard template.  Nurse gets assignment.  Assignment carries with it challenges unique to a specific environment—night clubs, debutanting, the joint, ice extravaganzas.  Nurse meets young doctor (perhaps two).  Nurse and doctor squabble, but then ultimately solve the central plot complication and get married.

Many aging hipsters collect these books, not so much to fantasize about living in the high-stakes world of freelance nursing, but because these titles are so flagrant in recasting the professional limitations placed on women at mid-century into a compensatory source of romance, adventure, and intrigue.  I suppose one could argue these stories offered the more subversive pleasure of demonstrating that “nurse knowledge” is almost always superior to “doctor knowledge,” and that without the love of a good nurse, most male doctors and surgeons would end up dead, discredited, or worst of all, unmarried.  These books have also become more visible in recent years as the inspiration for a series of paintings by American artist Richard Prince, perhaps the most widely visible of which is the cover to Sonic Youth’s 2004 album, Sonic Nurse.

You basically know what you’re going to get with Country Club Nurse (1967) or even Ozark Nurse (1967), but what could “Unlicensed Nurse” be about?  A woman 3 credits short of her degree sets up her own TB clinic in a tenement basement?  Nurse moves to new state where she is no longer accredited and gets unjustly sued for fashioning a makeshift splint during a Girl Scout camping trip?  Nurse can’t drive to work, and so finds new patients and new love while taking public transportation?  Actually, Unlicensed Nurse turns out to be a rather candid bit of agitprop for reproductive rights, so candid in fact that book was originally banned in Australia (I know this from a Google snippet referencing an article by N. Moore, “Treasonous Sex: Birth Control, Obscenity, Censorship, and White Australia,” that appeared in the journal, Australian Feminist Studies [November 2005].  I would provide more information here, but that would require purchasing the article at some exorbitant rate, and my interest in illegal nurse books only goes so far).

Here’s the plot, and it’s a doozy:  Nurse Geraldine Brady is in love with Doctor Romney.  One night Romney calls her up to meet him immediately at the Long Island mansion of the Drayton family.  The family’s teenage daughter and sole heir to the Drayton “pump millions” (?) has been knocked up by the family butler, and the mother wants the pregnancy terminated.  As it probably will be again soon, abortion was illegal in 1939 (sorry, but do you see anyone getting all that outraged about this retrenchment anymore?), so the entire affair must be handled discretely.  In a strange displacement of culpability, the patient suddenly sits up violently in the middle of the procedure and accidentally stabs herself with a sharp instrument.  Dead from a botched abortion!  Well, kind of.  Nurse Brady tries to help her boyfriend doctor hide the truth, but to no avail.  Another relative arrives unannounced and they tell him the girl died of an aneurysm, but in a rather Victorian flourish, he pulls the sheets off the girl to reveal the bloody truth!  He vows both doctor and nurse will pay for their crime.

But because Nurse Brady is so crazy in love for the doctor, she agrees to take the blame for botching the operation.  It’s best that way, reasons Dr. Romney, because his career is more important for their long-term financial interests (hint, hint—for when I finally marry you, Geraldine).  Punished for her supposed misdeed, Nurse Brady thus becomes “unlicensed nurse,” no longer able to practice her profession in the United States.  Romney then decides it would be best if Geraldine got out of New York until the controversy dies down, and so he secures her a position on a cruise ship on its way to the Caribbean.

Aboard the ship, Nurse Brady discovers the passenger list features many rich mothers and daughters from the New York and New England areas, all of whom are on their way to either (1). have a legal albeit less medically competent abortion; or (2). give birth to the illegitimate child so that they can later claim to have adopted it at one of their various ports of call (I’m not exactly sure how bringing home a lily white baby sired under the bleachers during the Harvard-Yale game and then claiming it was adopted in Jamaica would actually work, but I guess people were generally more naïve in the 1930s).   Nurse Brady’s gig is for the most limited to caring for these women and maintaining their precious and oh-so-valuable secrets.   In a bizarre and fleeting side-plot, two college boys appear to be vying for Geraldine’s romantic attention, and in a moment of drunken weakness she is more than willing to bed one of them.  But in the end they turn out to be escorts on the ship making sure no one runs away with all the abortion money provided by the waspy sperm donors back home.  Somehow seducing Geraldine was a “test” of some kind, although I didn’t really follow the logic here.

When Geraldine gets back to New York, she sees Dr. Romney only briefly.  He claims to be working on restoring her good name, but something seems fishy about him.  Before she knows it she’s back on the cruise ship for a second voyage.  This time, however, the ship has added the services of the young and dashing Dr. Borden.  As Romney’s letters get more infrequent, Geraldine finds herself increasingly attracted to the new doctor.  Only one problem: he is staunchly opposed to abortion in all cases, and discovers Geraldine’s involvement in the notorious case back in NYC.  There follow a series of rather pedantic lectures on the merits of providing access to safe and legal abortions, but Borden’s having none of it.  And then the unthinkable: Dr. Romney sends a telegram announcing he has married some rich society girl back in New York! 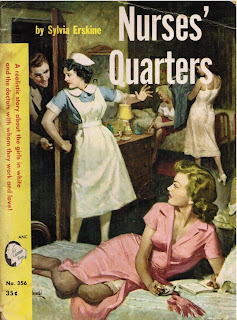 A third trip on the cruise line, again with Dr. Borden.  But there is another passenger on board this time, Greta, the buxomly beautiful Swedish daughter of the boat’s Captain.  Lo and behold, Greta takes Nurse Brady aside and tells her she is pregnant….and Dr. Borden is the father!  Obviously, things aren’t going so well for Geraldine at this point in the book.  Boyfriend #1 is a cowardly two-timing creep, and potential boyfriend #2 has yet to master the basics of prophylactic contraception.  Dr. Borden denies it at first, but after administering the pregnancy test himself, he admits it’s true.  And then in a rather stunningly naked reversal, Dr. Borden suddenly decides that abortions aren't actually all that bad.  After taking care of Greta's troubles, Dr. Borden admits he’s been thinking about the issue a lot lately and agrees, “there is a liberalization of the feeling with respect to matters of this kind.”  Geraldine pops out a book on abortion she just happens to have with her, and the two review the extraordinary statistics on the matter circa 1939.  The next morning Dr. Borden has come to an epiphany: He and Nurse Brady will return to the States, buy an abandoned farmhouse somewhere in the New England countryside, and set up a secret but safe abortion clinic for the rich daughters of New York City.

Now, you would think this might be a good ending and that you have more than received your money’s worth in Unlicensed Nurse.  But the book continues.  Things are going swimmingly at the upscale abortion clinic, but as the narrator notes, “After the fame of the hidden hospital spread through the various strata of society, it was almost inevitable that it would more or less boil over into the other classes that might demand the attention of the its doctor and the nurse.”  Cue the Italian guy, who even though he arrives in a swanky Mercedes, is apparently still of “another class” to their normative clientele.  But this is no surprise, thinks Nurse Brady, as “Italians were particularly careful about the virginity of their girls.”  Questo è tanto vera!

But the ethnic express has just left the station:  Italian guy turns out to be a mobster.   He wants to blackmail all the rich society families who have been bringing their daughters to the clinic, and gives Dr. Borden and Nurse Brady 24 hours to agree to his little plan or else things might get rough for them at the clinic.  Borden thinks about it, but then decides to stand up against the gangster, reasoning their entire enterprise is based on good “word of mouth” among New York’s social elite—any word of blackmailing will of course cut off the business entirely.  Implausibly, the gangster ends up agreeing with Borden and even respecting him for his bravery and resolve.

Which earns doctor and nurse their next assignment—taking over for a particularly bad sawbones at the gangster’s own secret abortion facility, a backwoods shack where he brings his “working girls” when they get in a family way.  The other doctor is not to be blamed, says the surprisingly understanding mobster, as he was originally hired to take slugs out of guys named Bugsy and Alphonso, but now that his mob has gotten into the prostitution racket, the Doc spends all his time bluffing his way through dangerous abortions done in the filthy mob hideout.  The results haven’t been good, and that’s bad for business.  So in addition to their own clinic, Borden and Brady start working a weekly shift for the Mafia as well. 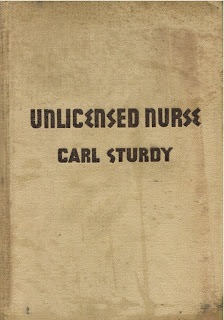 There’s some more plot after this.  Dr. Romney hires Nurse Brady to work at a children’s hospital funded by his new wife’s huge fortune, but it’s all just a ruse to have sex with her again.  And she does so, willingly, which I have to admit seems pretty risqué for 1939, especially as we know from generic demand that she must end up with Borden.

Later she returns to the farmhouse clinic and finds Borden missing.  Did the mob get him?  Was he arrested?  Is he back on the boat?  No, he’s in New York planning a mass campaign of public awareness (the Maternity Safety Association) for the necessity of safe and legal abortions.  Final words to Nurse Brady: “Then we’d better get married and stay out of trouble, I’m not taking any chances with you.”  Given the various connotations of “trouble,” it is an odd ending to say the least.

So there you have it.  Abortions.  Drunken nurse/collegiate near hook-ups.  Rich hypocrites.  Surprisingly casual pre-marital sex.   Gangster prostitution rings.  Much more than one would expect from such a seemingly innocuous title as “Unlicensed Nurse.”

There, I‘ve read it so you don’t have to.  You’re welcome.
Email Post
Labels: Archeology Art on High Books Normalization Sleaze