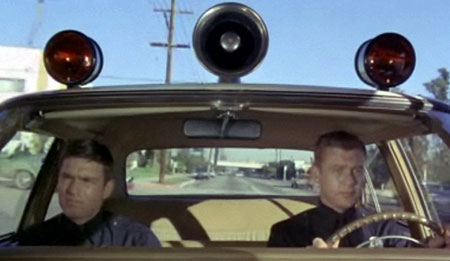 All fair-minded people would have to agree that Jack Webb's Dragnet was the most explicitly right-wing show ever to air on U.S. television, at least until Jack Bauer started tying people to chairs in Fox's 24.   Interestingly, both brushes with fascism typically center on the looming destruction of Los Angeles; 24 with its recurring bio-nuclear apocalypses, and Dragnet with its scourge of hippie parents smoking pot while their children drown in bathtubs.

Dragnet is a classic, waiting there for each subsequent generation to marvel at just how freaked out "the Man" was about the encroachment of various forms of social, cultural, and racial difference in the late 1960s.  Less known and certainly less appreciated is Webb's spin-off series, Adam-12, which ran a rather surprising seven seasons on NBC between 1968 and 1975.  While Dragnet followed detectives Friday and Gannon on individual cases each week, Adam-12 concentrated on the diverse challenges facing two beat cops patrolling LA all day in their eponymous squad-car.  Each episode typically involved an "A-crime" punctuated by a series of one-scene minor skirmishes, most of which reflected Webb's apparently bottomless contempt for the American public (the basic message of both Dragnets and Adam-12 is that the public to be "served and protected" by the LAPD is really not worthy of either--most "regular" people in these series are basically whiny idiots).

Having finished his search for Kerouac Kicks on Route 66, Martin Milner here played Malloy, the slightly older cop who is well-seasoned but never jaded.   Kent McCord, meanwhile, played the younger cop Reed with such understated restraint that he actually seemed like a guy who just wandered onto the Universal lot and happened to sit down next to Milner in the prop car.

While not quite so explicitly conservative in its politics, Adam-12 still has a whiff of the right-wing paranoia so beloved in Dragnet.  Whereas the single-case structure of Dragnet allowed Webb to consider how horrifying some new subcultural threat was for 22 full minutes of sustained dismissal, Adam-12 had to be more succinct in its random encounters with symbolically dysfunctional citizens.  Still, few episodes went  by without Reed and Malloy busting some malcontent on the town square set at Universal studios--a reluctant demonstration of just how patient a democratic society must be with its various "underclasses" and "deviants." 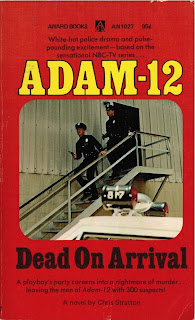 Like so many series of that era, Adam-12 also spawned a few novelizations (as well as a comic book, toys, lunchboxes, etc).  Having just read Dead on Arrival (apparently the second book in the series, published in 1972), I was surprised to discover that the right-wing propaganda of the Webbiverse permeates its print incarnations as well.  Like a typical episode the of the TV series, Dead on Arrival follows Reed and Malloy around L.A. on a variety of cases.  One recurring flare-up in the city involves an imaginary neighborhood called Acropolis Beach:

Acropolis Beach was one of those marvelously misnamed communities in Los Angeles whose designation had absolutely nothing to do with either its appearance or its atmosphere.  It was too close to the airport to be considered desirable, in spite of its seaside location, but the neat frame houses were for the most part well kept, the streets clean, and the store fronts had the look of modest prosperity.  Not too many years ago Acropolis Beach had been a slum, half-abandoned to the thunder of jets overhead, but now, without the aid of a single acronymous government agency, it presented tangible proof that people who wanted to live decently and were willing to work toward that end could achieve it on their own.  The fact that most of the residents of Acropolis Beach were black made it all the more interesting, at least to Rollie McDade.

This is all code language, of course, implicitly pitting a middle-class African-American community that succeeds without government intervention against the various welfare cheats, radicals, and rioters populating the conservative imagination of black L.A (i.e. Watts).  Acropolis Beach is a testament to free-market bootstrappism, and author Chris Stratton carefully emphasizes that the community here is a bit "older" than other districts of the city.  And the secret to the community's success: "Jobs...Not big jobs or important ones, but jobs."

Rollie McDade is a young African-American filmmaker who wants to make a documentary about Acropolis Beach, and so he first secures the approval of "Mr. Smith," owner of the local drugstore and unofficial "mayor" of the community.  Smith has no problem with McDade filming a documentary in the neighborhood as long as he 1). gets the appropriate permits; and 2). promises to "tell the truth" about the community.  The first stipulation obviously involves little more than a trip to City Hall.  The second becomes the source of friction that keeps drawing Reed and Malloy back to the area.  After his meeting with the mayor, McDade returns to his film crew waiting outside.  Just to be safe, he tells everyone to rip out the title page of the shooting script: Acropolis Beach: The Worm in Eden's Apple.

So, we now know that McDade--like all young punks with a film camera in the early 1970s--comes with his own agenda (vaguely "leftist," but really more "assholist" in nature).  His cohorts include a young blonde girl with "aggressively faded blue jeans," a white dude who--despite the warm L.A. weather--is wearing a "goatskin vest" and "wide-bottomed corduroys," and the project's African-American cameraman, Gary, who sports a mustache, goatee, and a "cynical smile."  From previous Webb-lore, we know from their clothes alone that these idealistic yet misguided young idiots wouldn't know the "real-world" if it bit them on their patchouli-soaked rear-ends.

McDade isn't content to simply record Acropolis Beach "as it is," and so he begins staging events to create crisis in the community, to cultivate that "worm" in Eden's Apple.   First someone vandalizes a prized pink-flamingo yard ornament. This constitutes perhaps the one charming detail in this otherwise loathsome propaganda--the idea that the vandalization of a lone pink-flamingo anywhere in Los Angeles would constitute a crisis worthy of police intervention.  But Reed and Malloy dutifully take the call, and lo and behold, who is there filming the "crisis" but McDade.

But the centerpiece of this story happens 50 or so pages later.  Once again there is trouble in Acropolis Beach, and once again our cops light up the cherries and cruise on over.  This time McDade is filming a scene with his black cameraman and white blue-jean girl making out on the beach.  And the local community is not happy.  The officers try to diffuse the situation, but:

Malloy had already seen the movement in the knot of black youths, the surge toward the blanket.  There were six or seven of them, maybe more, and there was no way to tell if any of them were carrying weapons.  Malloy touched the butt of his pistol, hesitated, then stepped forward with his night-stick held in front of him. He wished, fleetingly, that he had "advised" headquarters that assistance was required, but it was too late for that now.

Eventually Malloy gets filmmaker McDade and mayor Smith alone to work out the situation. As it turns out, the interracial love scene on the beach is just "bait''--the real purpose is to draw the crowd and take still photographs of its angry reaction.  "Still pictures?  In a movie?"  asks the bewildered Malloy. McDade schools him on avant-garde documentary practice, circa 1972:

Sure!  Picture it, man. Stills inserted into the footage, uptight crowd in the background while we're filming a little salt-and-pepper love scene.  Like it happens here too, don't forget that. Anyway, maybe I'll use a split screen in the final print.  See what I mean?

Next come the inevitable "Uncle Tom" accusation, another favorite device in the Webbiverse.  While the older mayor of the community "doesn't deny that mixed raced dating" takes place in Acropolis Beach, he nevertheless describes the town as "a bit old-fashioned" and "conservative, in the original sense, you might say." Or as Gary the cameraman puts it, "Toms."  This elicits the typical compensatory speech from Mayor Smith about how his young son, a lawyer, is currently defending "a group of radicals, black and white, who are on trial for arson and murder."  He believes in their cause, adds the mayor,  but not their methods.  "Call me a Tom, young fellow, and you declare your bigotry,"  he says to Gary the goateed camera-cynic.

Webb and his minions loved this strategy, as it appears repeatedly in Dragnet, Adam-12, and (again, to my surprise) apparently even in the novelizations written for teenage boys.  Here it is in a nutshell: Address certain high-profile accusations of antagonism between LA's African-American population and the city's civil authority (usually the police, but in this case an "unofficial" mayor) by transforming that energy into a matter of bigotry within the African-American community itself.   Here it is "black youth" who cannot abide interracial mingling on the beach (even if it is clearly only staged for a film), and it is the cynical artschool African-Americans who cannot understand just what a victory Acropolis Beach represents for the larger community.

This same logic pervades one of the more notorious episodes of Dragnet, wherein Friday and Gannon ask an African-American officer to help recruit more of the "ethnic types" to the LAPD.  At first the cop is on board, but then suddenly quits the force entirely because his own African-American neighbors keep demonstrating their intolerance by throwing rocks at his home.  Friday's solution to this dilemma?  "Move to a better neighborhood"--apparently one far away from all these angry racists.  You can almost see Friday/Webb's mind at work:  Why not consider Acropolis Beach--I hear wonderful things are happening there for those willing to work hard and play by the rules. 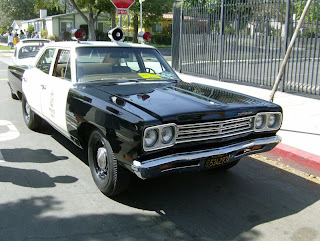 I say this book was "surprising" only because I didn't realize such explicit control over the politics of a story world would permeate all the way down into these novelizations.  But clearly, the story bible for Adam-12 not only explained the characters and typical plot structure, it also detailed the tone, sociological models, and political ideology that were to rule this universe as well.

Note: Additional research (i.e. going on the Web) reveals Adam-12 still has many fans even today, although this "cult" appears to focus most centrally on the series of vintage "muscle cars" driven by Malloy and Reed over show's 7-year run.

Additional Note: Someone is selling a copy of Adam-12: Dead on Arrival on eBay for $90 bucks.  This person is insane.  If you are patient, you should pay no more than $3-5 bucks for any TV novelization.
Email Post
Labels: Books Deviants and Delinquents Normalization The TV