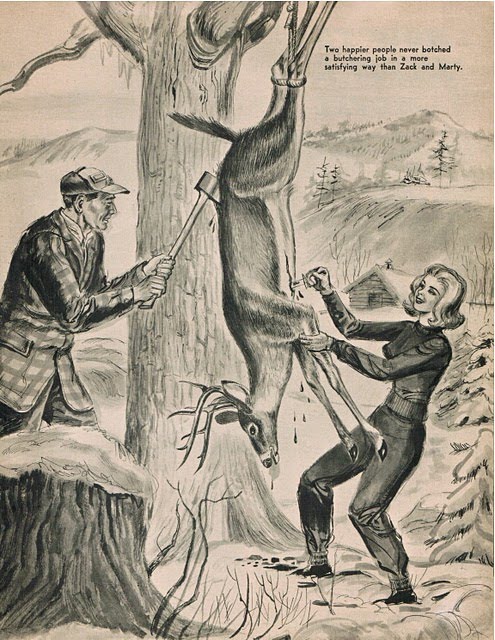 Sure enough, that night “two big man-sized steaks” are sizzling in the skillet, and Zack looks at Marty with new eyes.  “She might be little, and sometimes pretty womanish,” he considers, “but this afternoon looking at me across a bloody hunting knife and making a cold nasty job seem like fun, she’d been the answer to just about everything any man could want in a woman.”
Later by the fire, Marty suggests that with the additional meat and a few other provisions still in the pantry, they might just be able to make it all the way to spring. Then she mentions
having “six cans of peaches,” which finally drives Zack over the edge—the “single straw that broke the camel’s back.”  The idea of spending the entire winter screwing while gorging on venison and peaches is more than any man can be expected to resist. Sorry Mel.
"She knew it, too, for she fished around on her plate and finally came up with a small round bone shaped like a ring.  Picking up she proceeded to chew away all the excess meat in a very unladylike manner.  Then, her eyes soft and just a little scared, she deliberately held it out to me, at the same time extending her left hand--ring finger foremost.
"Go ahead," her lips barely moved. "Say--say as many of the right words as you can remember--if it'll make you feel any better."
And that seals it--a common-law cabin marriage consecrated in deer blood and peach juice.  Quite romantic, actually.  It's surprising this tale didn't end up in True Love Stories instead.
Email Post
Labels: Archeology Popular Sublime Sleaze Spectacles of Death