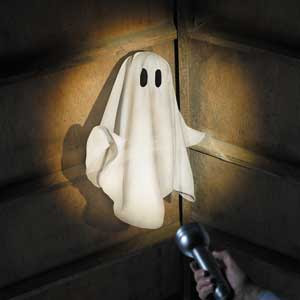 Someday parapsychologists will finally come to an agreement that behind every great ghost there is a screwed up family.  Many outside the world of ghost theory already know that poltergeists have typically centered on pubescent teenage girls (this is where Spielberg’s half-great/half-crappy movie gets it so wrong—all those special effects would have been following the older daughter around, not sweet little Carol Anne).  That younger teenage daughters can be the locus of intense emotional disruption and familial trauma is a well-known fact, not only to psychics, but to social workers and Disney’s marketing division as well.

Parapsychologists also place charged emotional energy at the center of hauntings  (a ghost or ghosts associated with a specific location, as opposed to the poltergeist’s attachment to a specific individual).  The current theory is that moments of intense emotional trauma (like being decapitated in a lonely dungeon or drowning on your way to the prom) leave behind a psychic trace that “sensitives” are capable of perceiving.  In fact, your house could be haunted right now and you don’t even know it because, well, you might be a little slow on the psi-uptake.
Even if ghosts don’t actually exist, the idea of the “sensitive” may not be too far from whatever “truth” can be extracted from the long tortured history of parapsychology.   Not “sensitive” as in actually seeing into another dimensional reality, but “sensitive” as in pathologically attuned to the emotional dynamics of family tensions.  In this respect, perhaps psychoanalysis and parapsychology will one day merge (as Freud seemingly thought they might) and the ghost can take its rightful place as the roving ambassador of the unconscious. 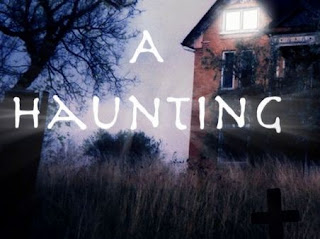 One television series that gets this, I think, is the Discovery Channel’s program, A Haunting.  I don’t know when this show started or how far it is into its run, but I do know that it features some of the best family melodrama currently on television.  Each hour-long episode dramatizes the purportedly “true story” of a recent haunting, mixing an America's Most Wanted quality re-enactment with talking-head interviews featuring the original “hauntees.”
For the most part the show delivers the promised paranormal goods—strange footsteps are heard, ectoplasm slathers about, table settings come to a mysterious end.  Every so often, for good measure, a demon pops up to appease the Christian demographic.  And yet at the same time, each episode seems to invite the audience to speculate that the real problem is less a supernatural entity than a super-crazy member of the family.  It is difficult to say with any certainty if this internal critique is a subtle trick of style and narration, or if instead it is a function of the social milieu that typically generates good ghost material.  If the former, kudos to the Discovery Channel for such a surprisingly nuanced production.  If the latter, ghosts appear to be most common in homes teetering on the brink of a restraining order. 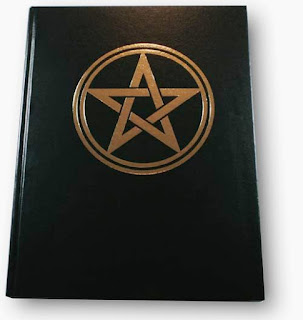 The episode that first caught my attention concerned an Ohio family that moved into a home built on the grounds of what used to be a haunted schoolhouse.  When mom finds the headmaster’s gravestone out in the front yard behind some bushes, she decides to learn all she can about the occult. Already the producers signal to us that all the subsequent ghosts in this story could well be the product of her supernatural hypochondria, especially when her husband—in an excellent reversal of Medium—keeps telling her to put away her camera-ready black-leather pentagram book so he can get some sleep!
A few unimpressive mysteries unfold around the house as family tensions rise between mom, son, and step-father.  Then one night, when the boy is about twelve and home alone, he sees a kitchen chair move by itself and a bloody-faced ghoul staring through the front window.  Now, I would submit to you that this is just a normal part of growing up.  Quite frankly, are there any kids who did NOT on occasion see the furniture move around some or a bloody-faced ghoul prowling the back yard? Rather than explain the tricks of fear and imagination to her child, however, Mom sees this as a great chance to show off all the occult knowledge she’s accumulated, so she takes son and husband outside and shows them the headmaster’s gravestone for the first time.
Divorce soon follows, and in the next segment Occulto-Mom takes her son—now in his teens—to live in a small town in Texas.  She doesn’t have much money, so they have to rent the cheapest place she can find.  Walking through their dilapidated house after signing the lease, they pull up the old carpet in the boy’s bedroom to discover---a giant pentagram etched into the floor!  Incredibly, they decide to live there anyway; in fact, Mom takes this as an omen that she should start studying the occult again (as opposed to Texas contract law).
So Mom becomes a witch, a Wiccan to be exact.  Soon she’s taken over the pentagram suite so that she can burn her mystic candles and mumble Latin praise to various nature deities. She's very protective of her son, and devastated when he chooses to enlist in the Air Force to get the hell out of Dodge as soon as he graduates.
He’s gone for seven years, and when he returns after the commercial break, he finds Mom is even more into witchcraft than ever before.  That night, sleeping in his old bedroom (which is now tastefully adorned with pictures of a frolicking Pan), he awakes to a vengeful attack of “sprites” (little spots of light added in post that dance around the room, creating a sort of Studio 54 of the Damned).  Then his Mom appears to him as a phantasm in a medieval looking robe and points at him menacingly (as people in medieval robes are wont to do).  He decides to leave home again the next day when he discovers that mom has nailed his crucifix on a freshly drawn pentagram…over his bed! 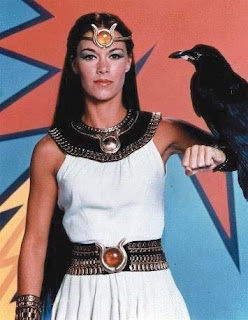 Mom finally learns her lesson during an invocation of Isis when the “sprites” return as the opening act for some much scarier demons.  To her credit, the real Mom (in one of the interview clips) basically admits she didn’t know what the hell she was doing, and that her attempts at a “protective spell” for her son probably opened the doors for something much darker and more terrifying—like sprites, demons, and a 7-year stint in the Air Force.
Every episode I’ve seen has a similar dynamic.Weird things happen, but later, you can’t help but wonder which axis of repressed family trauma is the real engine for all the flying cutlery (is it a coincidence that both poltergeists and enraged wives like to throw frying pans?).
I have to admit I’m enjoying the melodrama of A Haunting more than the scripted adventures of Mad Men.  Like all engaging reality television, A Haunting is fake enough to not get boring, but retains a whiff of the real just strong enough to make you marvel--not over the possibility of the supernatural—but at the endless fungibility of the dysfunctional family.  You tune in for the ghosts, but leave wondering what it would be like to grow up in east Texas with a mom who goes around town clad head-to-toe in black and working a 5-inch pentagram around her neck.
Sure, Don Draper is all mysterious and brooding, and he’s had some affairs and done a bunch of other stuff I’ve already seen on TV a million times—but he’s no competition for the sexually frustrated woman who, in another episode of A Haunting, buys a photo of a dead Vietnam veteran at a garage sale, hangs it over her bed, and then begins to “feel” his presence in the home—a delusion that later begins to envelop her daughters as well.  That I haven't seen, nor am I likely to ever again no matter how much television I watch.
Email Post
Labels: Gothic Haunted Magical Thinking Satan The TV Uncanny