Can You Help Me Occupy My Brain? 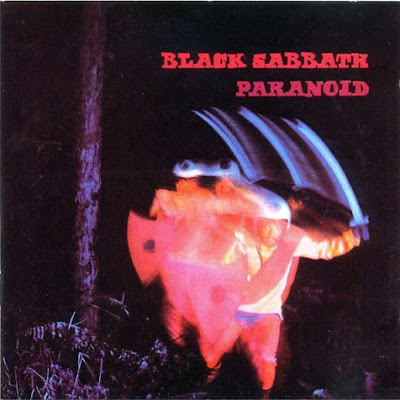 Rock lore has it that the heaviest of heavy bands in the 1970s, outfits like Hawkwind, Blue Cheer, and Black Sabbath, actively sought in concert to play something called “the brown note.”  The dream was that if you played a note so low in frequency (under 20hz) and so loud in volume (over 100db), it would trigger an involuntary spasm in the G.I. tracts of the audience, forcing a spontaneous mass crap event.  So powerful is the “brown note” that it would quite literally “shake the shit” right out of anyone within its blast range.
This legend has survived for years among admiring teenage boys (there’s even a South Park about it), but why exactly a band would want to make an audience shit its pants in a live venue remains unclear.  Sure, it would be awesome. No one doubts that.  Maybe the goal was to signal absolute contempt for the pimply pot-heads who forced you to play “Iron Man” every night.  But it doesn’t seem like the best long-term strategy for future ticket and record sales, especially if large numbers of your shit-encrusted fans were to die off from the addition of even more pathogens to the floor of Madison Square Garden.
Happily for those dedicated to sonic warfare who cannot afford a city block of Marshall amps, there are other ways to annoy and/or incapacitate those around you with the crippling power of sound.  For just under $20 and the price of a couple batteries, several websites will sell you a particularly nasty little unit dubbed “The Mind Molester.”  Here’s how it works (as described by its proud makers at Shomer-Tec) 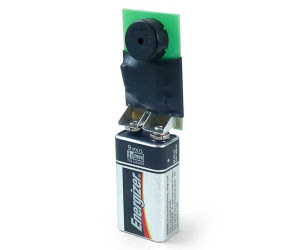 The Mind Molester is an instrument of creative electronic harassment. It's an electronic audio device that can drive your victims nuts trying to figure out what it is and where it's at. You can drive somebody crazy in their own house or disrupt an entire office. They will become obsessed, awaiting the next sound burst to try to determine its location, completely disrupting their normal activities. Due to the duration, frequency, and sound characteristics, it's a very difficult, time-consuming, and frustrating task to locate the unit. And even if found, they'll have no idea what it is (great to set off that paranoid subject's imagination) [all spelling and grammatical errors courtesy of Shomer-Tec]
They go on to boast that the device emits an intermittent chirp at around 92db  (which is about the same level as a blender or lawnmower).  Even more diabolical, there is a new and improved version of the Mind Molester with a chip that makes its activation completely random.  In other words, while the first generation simply chirped continuously every four minutes so that it might, after a long and grueling search, at last be uncovered, the new version varies the duration between chirps and occasionally even goes into sleep mode.  It quite possibly could take days, weeks, or even months to finally discover its location.
What is particularly interesting about the Mind Molester is the various ways it is marketed on the web.  One site promotes it as the ultimate office gag:
For those of you who work in an office, sitting behind a desk all day or being stowed away in a cubicle can probably get a little mundane and monotonous. So liven up your office space and start a fun game of hide-and-seek with your co-workers with the Mind Molester. Depending on the people you work with, this creative little device will either be a fun practical joke or a way to get back at your most annoying colleagues.
The key variable here, obviously, is the phrase “depending on the people you work with.”  Either they will all merrily join in the quest, glad to have a few moments of group diversion before shuffling back to their holding pens, or they will gleefully set up a tribunal to apprehend and fire the idiot who would be so mentally unbalanced as to think such a stunt was funny. Maybe its meant as a final passive-aggressive gesture for Dilbert to leave behind before hanging himself in the copy room.
Another site is more honest in their pitch: use the Mind Molester to extract sweet, sweet revenge.  Hate someone with a passion but a little too chickenshit for a direct confrontation?  Why not leave behind a Mind Molester next time you go over for a visit?   Turns out there are a whole bunch of websites dedicated to moving “revenge” merchandise.  In addition to the Mind Molester, Janders Inc. will sell you something called “Dead Ringer.”  You hook this into a person’s landline and it blocks the phone from ringing (perhaps more a blessing than revenge, actually).  Another device turns any outgoing phone call into a wrong number—even when you call the phone company to schedule a repair! 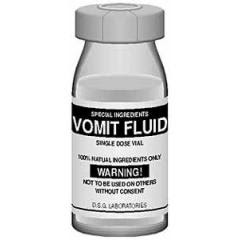 Remember when magazines used to sell plastic vomit as a practical joke?  In the new world of X-treme joking/revenge, there is now apparently a product called “Vomit Fluid.”  You pour it into someone’s drink and he vomits.  Simple, elegant, and unambiguous in its message: "I really, really hate you and wish you were dead;" or alternately, "Welcome to Tau Kappa Epsilon, dude!"  “Pump-a-dump,” meanwhile is an aerosol described as a “military grade putricant” that produces the “incredibly vile stench of human waste material” (see the Brown note, above).  And for the real a-hole, there is something called “Liquid Key Scratch,” described as having “an insatiable appetite for automobile paint.”

If the sight of your arch enemy spontaneously retching in his hopelessly scratched septic tank on wheels isn’t enough for you, there’s still room to amp it up a bit with an even more powerful weapon: Sonic Nausea.  Again, the good people at Shomer-Tec: 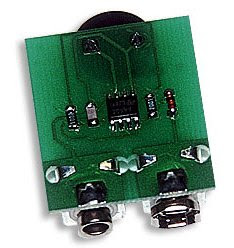 Sonic Nausea is a small electronic device which can really turn one's stomach. It generates a unique combination of ultra-high frequency soundwaves which soon leads most in its vicinity to queasiness. It can also cause headaches, intense irritation, sweating, imbalance, nausea, or even vomiting. Hiding this device in your inconsiderate neighbor's house might put an end to their late-night parties. The abusive bureaucrat's office, the executive lunchroom... the possibilities are endless for that small portion of inventive payback.
Still not getting it done?  The arms race of dickery continues at just under $90 for Super Sonic Nausea, said to be capable of “disrupting and dispersing” speeches, demonstrations, and other mass gatherings.  And there you have it.  What began as a small dispute over your neighbor’s yapping Shitz Zsu has now escalated into Soviet crowd control protocols.  That will teach the Johnstons not to bring Mr. Snickers to the next Home Owners Association meeting! 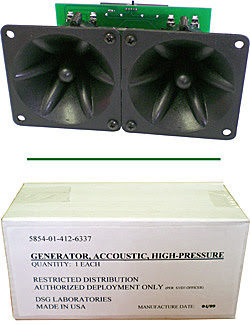 Which leads to a final community interested in Mind Molesting technologies--the paranoid. Not (necessarily) the brown-note Sabbath paranoid, but the clinically psychotic paranoid.  As many Internet commentators have noted, the Web has allowed previously alienated and pathologically isolated individuals (like white supremacists and Carson Daly fans) to find one another on the Net.  This includes many individuals who believe the government continually bombards them with microwaves, secret beams, and other targeted energies.  The Mind Molester's annoying little chirps might seem like small potatoes in such a universe--but that's just the point.  Most of these individuals believe the campaign against them involves more than just one "Super-technology," maintaining instead that their tormentors resort to all manner of small, fleeting attacks made day after day in an effort to produce gradual insanity.  So the Mind Molester is a big concern for them.  And why wouldn't it be? As one merchant writes, The Mind Molester
is actually a very affordable product, since it sells for around 20 US dollars, which is indeed a very small sum to pay for driving a room full of people crazy. However, be advised, using this gizmo might prove to be dangerous for some, especially those with a history of mental disorders."
Think about that before you hide one behind the water cooler.
Email Post
Labels: delusions Fatal Strategies Music New World Order Psychosis Troubling