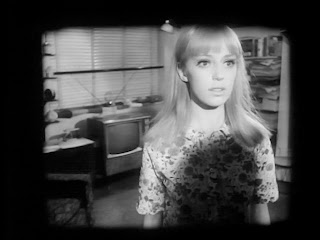 One of the most annoying tendencies in film theory is the habit of using the same movies over and over again to advance certain theoretical concepts--you know, the easy ones that seem to prove a point with perfect clarity. With the rise of "gaze" theory in the 1970s, for example, any film that appeared to be about vision in some way, be it consciously, self-consciously, or unconsciously (if one can make such distinctions about a strip of celluloid), became evidence of the cinema's foundations in voyeurism. Round up the usual suspects: Rear Window (1954), Peeping Tom (1960), Psycho (1960) Blow-Up (1966), and pretty much any other film where someone looks at someone or something in a vaguely creepy way.

The fact that these films all appeared within a decade or so of one another should make us suspicious. Perhaps these films do not speak to some fundamental truth about cinematic spectatorship so much as demonstrate the rise of voyeurism as an explicit theme in post-war cinema. Note also that the majority of these films--if not all of them--are explicitly about psycho-sexual dysfunction, demonstrating that the creative parties involved were probably not only familiar with "voyeurism" in the abstract, but also with the necessary psychoanalytic literature to motivate it as a narrative premise. After all, people in the '50s and '60s still read books every so often, even a bit of Freud.

Particularly annoying in this regard is the constant return to Hitchcock. As readers in the literature of film studies are well aware, any self-respecting theory of the cinema must begin by accounting for Hitch, as if he was the alpha and omega of all cinematic practice and not just a historical fetish of a certain generation of cinephiles. Zizek mines this territory frequently, finding time to recuperate even The Trouble with Harry (1955) as not only significant, but also strategically placed in a grand theory of 3 unified cycles structuring Hitchcock's post-war career (see Zizek's Looking Awry if you are interested in what I'm bitching about). But as Freud himself would no doubt tell us, sometimes The Trouble with Harry is just The Trouble with Harry.

There is little doubt Hitchcock has endured more psychoanalysis than any other director--past, present, and probably future. But the question remains: just how difficult and/or useful is it to isolate psychoanalytic concepts within Hitchcock's work when Hitchcock's work is already so explicitly about psychoanalytic concepts? After all, he did make a film called Psycho that ends with a psychiatrist lecturing the audience for ten insufferable minutes about what made Norman so batty. Could Vertigo be any more up front in its "perversions"? And what about Marnie--perhaps the single most self-consciously hysterical film in the history of Hollywood? Drawing on literary properties themselves already significantly informed by Freudian ideas, Hitchcock's post-war films often engaged perversion, scopophilia, voyeurism, guilt, neurosis, repression, dreams, delusions, and the death drive as their manifest content. Finding such mechanisms in a Hitchcock film is a bit like analyzing fish in a barrel.

But there is little chance the Alfred on the couch industry will slow down anytime soon, combining as it does two great traits of the academic habitus: 1). the search for cohesive structures beneath seemingly unrelated phenomena; 2). a love of mystery fiction. Indeed, it could be argued this has been the main impetus for a certain strand of film theory for the past few decades--an ongoing attempt to solve the "crime scene" of cinema.

No, film theory probably isn't going away anytime soon, even though it is no longer apparent exactly what needs theorizing, or why "the cinema" needs to be treated as wholly unique and separate from all other media platforms. But hey, if someone wants to continue searching for a theoretical model that will somehow bind The Kiss (1896) and Transformers 2 (right now)--aesthetically, affectively, stylistically, narratively, psychoanalytically, ideologically, institutionally--then god bless'em. But at this point in history, these two snapshots of entertainment history would appear related by little more than discursive contingency. 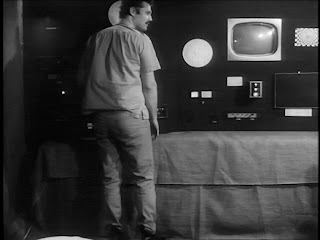 Given this state of affairs, perhaps we might at least search for a few new suspects in the psychoanalytic theory game, a few fresh titles that can take up the burden from the warhorses listed above. Happily, I have found such a film: Electronic Lover (1970).

Let there be no mistake about this: Electronic Lover is a terrible movie--smart in its own way, but terrible, almost unwatchable (certainly it wouldn't be the first movie to have more brains than talent). A low-budget sexploitation film that played the notorious grindhouse circuit of the early '70s, the film looks to have been shot in two or three days for about a $100. And most of that money seems to have been spent embedding a television set and a few other gizmos on a wall to better evoke the illusion of a futuristic computerized surveillance device.

The plot is simple enough. A creep called "Master" spends most of his time in the basement monitoring his TV/computer screen. Somehow (it is never explained), he has enslaved a worker (named "Brother") to wander the streets outside looking for sexpots to videofeed back to home base through a rather phallic-looking television-camera-gun. So that we might not miss this connection, Brother stops at one point and rests his cathode member on the back of a sedan so that we can take in the visual metaphor more directly. As Brother wanders around New York harassing women, the sweaty Master yells at him through an earpiece to demand better coverage and tighter close-ups. "What do you see, Brother?! What do you see?! Move to the left! Move in closer!"

In a stroke of good fortune for both Master and the patrons of Times Square, Brother has a remarkable talent for stumbling upon women just before they begin an elaborate nude dance or sensuous shower of some kind. This gets Master very excited, and after awhile, he goes over to a strategically placed full-length mirror, sticks his hand down his pants, and....well, you get the picture. 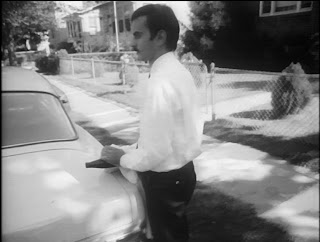 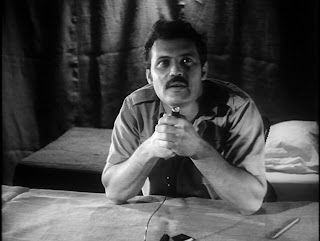 This goes on for awhile until Brother finds a bunch of "free love" hippies frolicking in the woods. I'm not sure exactly what happens here, but I think the general idea is that the hippies display a freedom, sharing, and spontaneity in their nudity that Brother finds refreshing, especially compared to the alienated labor of working as the D.P. for a chicken-choker. Before leaving to join the commune, Brother writes a message in the sand that he then telecasts back to Master: "Never Give Your Love Away." The symbolic import of this drives Master insane, and in a supreme display of no-budget scenery devastation, he staggers around his video command center in agony while pathetically calling for his mother. Finally he impales himself on an arrow, which had been introduced earlier in what seemed at first to be a wholly gratuitous archery interlude.

Seems like a good ending--but perhaps the filmmakers felt this would send the grindhouse johns out of the theater a little depressed, a little too reflexively critiqued. So, after a brief fade to black, we find that Brother is back on the streets with his handy camera-dick. But now he works for the female exhibitionist we saw earlier in the story. Ooh la la, the voyee has become the voyeur! And she is an even more cruel "Master" than Mamma's boy! The film ends with her laughing maniacally as she commands Brother to focus more closely on some guy's hot thighs.

What can this be other than a premonition of Laura Mulvey's pivotal essay, "Visual Pleasure and Narrative Cinema," which would appear in Screen five years after Electronic Lover left its grimy 42nd street screen? (It's also a rather bo 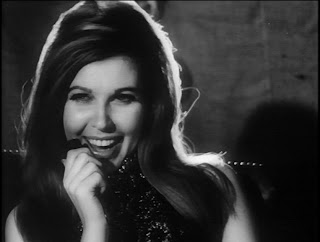 ld prediction of the dominant business model of the Internet age). Not only does the film seem to comprehend the power dynamics of "the male gaze," it goes so far as to personify that gaze as an actual actor in the story (the narrative decision to have Master boss Brother "gaze" around, as opposed to simply placing a bunch of hidden cameras in various bedrooms, is interesting to say the least). It's all there--scopophilia, narcissism, perversion, Mom--a massive complex that is only resolved when Brother Gaze quits his psychic master and decides to cavort within the new social order of hippiedom (perhaps they plan on starting an avant-garde film collective). Whereas more arty directors would dress up such fare in just enough style and mystery so as to convince a viewer he or she had "discovered" this underlying problematic, Electronic Lover simply hits you over the head with it in the crudest, most undisplaced manner possible. Hey you out there in the theater jerking off (presumably) to these phantasmic women...you're one sick puppy!

Should we be concerned that a crappy film from the grindhouse era encapsulates so many preoccupations of film theory in just under 70 minutes? No. But it should remind us that even the most abject of cinema is sometimes perfectly capable of understanding itself, and that psychoanalytic film theory and psychoanalytic cinema can trace their origins to a shared historical moment.
Email Post
Labels: It's Academic Normalization Paracinephilia Sleaze Theory Habitus