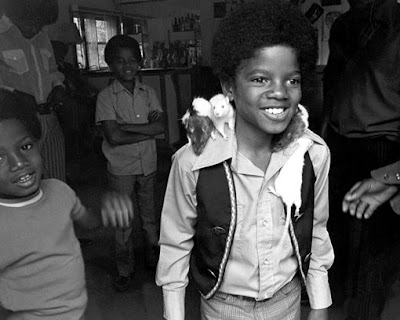 I didn't want to post anything about Michael Jackson dying because, let's face it, some forms of symptomatic cultural criticism are best left to professionals like Newsweek and Vanity Fair. But then I saw the above photo, an image that so dramatically confirmed my own sweeping thesis as to the origins of MJ's psychopathology that I felt I could remain silent no more.

Many have argued that MJ, denied a childhood by his well-creepy father, simply never grew up; or, perhaps more accurately, regressed at some point to become the King of Circle Jerks. My thesis is even more specific: MJ sealed his fate the moment he signed the contract to sing the title track from Ben. Yes, Ben, the odd 1972 sequel to Willard, the film about an odd young man whose only friends are rats.

Willard was already a film about a borderline adolescent who just couldn't quite adjust to the demands of adulthood. In Ben, the filmmakers doubled-down on the pathos by centering the movie on the friendship between a homeless rat (with Willard dead, Ben must take his rat family to the streets) and David (Lee Montgomery), a pre-teen boy with a bad heart. If you've never seen this pairing, you should take the time to watch the first few minutes of this clip in which boy meets rat.

Here we have a misunderstood child, alone in his playroom and performing his own private shows for an audience of zero, slowly dying of an undefined heart ailment. In scurries Ben, a rat down on his luck with no place to go. Together they become the best of friends, persevering even when all around them say its wrong for a rat and a boy to be so close. They even share the same bed, because that is what really close friends do! It is a loving act.

For added confirmation, go to around the 8:00 minute mark in this clip and you will see David composing the theme song from Ben, working out the lyrics that will fill out the tune's famous melody. Examine these lyrics closely: 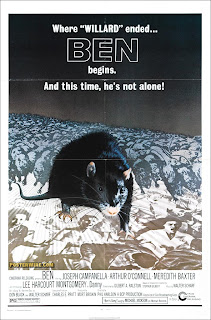 
If this doesn't explain the last 40 years of Michael Jackson's life, nothing can: Ben as the mute witness to Jackson's own isolation, embodied in the sequestered figure of David (who is so ill he can not go out and play with other boys).

As opposed to the half-assed sociological mumbo-jumbo from Time and Newsweek, this theory explains everything: the seclusion, the obsession with animals, the stunted sexuality, the desire to write his own material. And who could fault Jackson for turning out this way? Imagine being 14 years old (Jackson's age when he sang "Ben") and finding yourself personally involved in a movie that spoke so directly to your own personal feelings of adolescent persecution--it would screw anyone up for life.

If you doubt this theory, look again at the photo at the top of this post. Case closed.
Email Post
Labels: Animal Kingdom Celebrity Bullshit Music Regressive Phenomena Rodents