Psychoanalysis, the Occult, and the Lottery

I recently found a copy of Jule Eisenbud's Parapsychology and the Unconscious at a used book fair. A practicing psychoanalyst, Eisenbud was the chief proponent in the second-half of the 20th century of the idea that patients and analysts often engage in telepathic contact during analysis. Not as a metaphor, but as actual paranormal brain to brain contact. His 1999 obituary in the Journal of Parapsychology summarizes some of his key findings:

In his works he showed how telepathy occurs not only between patient and analyst, but also between patients unknown to each other as well. In this interplay of patient-to-patient telepathy the analyst, on superficial examination, doesn't seem to be involved at all. Upon closer inspection, however, Eisenbud recognized that the analyst's own repressed unconscious material, often something in the therapist's life that he was not particularly proud of, was indeed dynamically related to the patient's repressed material. (Rosemarie Pilkington. Journal of Parapsychology. June 1999).

Eisenbud was not the first to propose this theory--that honor belongs to Freud himself, who gradually convinced himself that telepathy was real and that analysts were particularly vulnerable to psychic intrusion (for more on this, see "Wireless Ego: The Pulp Physics of Psychoanalysis" in the excellent new volume, Broadcasting Modernism). Eisenbud's major intervention here, it seems, is the further claim that an analyst might somehow relay telepathic impressions between his or her own patients--not unlike a relay station or a signal booster.

When I took the book home, I got that added bonus that sometimes comes with a used book purchase--personal items left stashed in the pages. Four slips of paper fell out of the book: 1). a "Far Side" cartoon, 2). a lotto ticket, 3). a rather hostile letter to an analyst, and 4). a business card for same said analyst.

Now, this is fascinating on a number of levels. A key question presents itself up front: did this book once belong to the analyst named on the business card; or was it instead in the possession of his patient (who may have written but never mailed the hostile letter to his shrink)? This has significant ramifications in thinking about the other items left in the book. 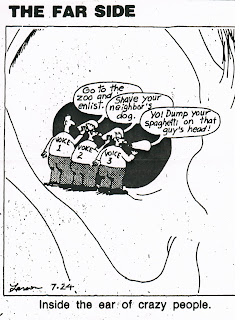 First, the "Far Side" cartoon. Three tiny guys stand on the edge of an ear encouraging someone to engage in various forms of insane behavior. Go to the zoo and enlist! Shave your neighbor's dog! Dump your spaghetti on that guy's head! The caption reads: Inside the ear of crazy people. As cartoons go, it's not particularly funny (yes, schizophrenics hear strange voices--why is it funny to draw them as real, tiny people?). But it is a very interesting item to find in a book on psychoanalysis and telepathy. Was this clipped because the patient who once owned this book was poking fun at his own "craziness," trying to diffuse the anxiety attending his own introduction to therapy? Or did he purchase a book on the unconscious and telepathic contact in order to theorize his own ego-alien voices?

If, on the other hand, this book and the cartoon belonged to the analyst, it demonstrates that psychiatrists and psychoanalysts, like any other stiffs working nine-to-five, enjoy collecting cartoons that reaffirm the idiocy of their clients. Next time you're at the dry cleaner or Jiffy Lube or dentist office, look around the reception area--odds are you will find a cartoon depicting you, the customer, as a moron. Or, like this panel, a joke appealing to that particular vendor's day-to-day experience.

Then there is the lotto ticket. Lots of schmucks play the lotto, but again, this rather banal artifact takes on new significance when inserted into a book on TELEPATHY. Was the patient hoping for some type of insight into the art of insight? Is it evidence that people stupid enough to play the lotto are also gullible enough to believe in mind-reading, clairvoyance, etc.?

And what would it mean if this lotto ticket belonged to the analyst? Would you want to consult a therapist who played the lotto? A friend of mine once said she dumped her therapist because of the horrible art in his w

aiting room. How could you trust your mind to someone who couldn't or wouldn't master the basics of interior design? she reasoned. Wouldn't it be worse to have a therapist that believed telepathy and/or a lottery score were real possibilities for the future, a professional adult hired to address your neurotic childhood who himself believed in infantile "magical thinking?"

As for the hostile letter, I am not reproducing it here for issues of privacy. Suffice it to say, it is a classic document of resistance, the writer-patient angry that he has been asked to ponder all week why he hates his birthday so much (isn't enough just to be aware that you hate your birthday?). He then bristles at the $240 a month in fees (we're talking mid-1980s here) and threatens to give up the whole charade. Again, it is impossible to know if this was a letter never sent, or more intriguingly, a letter kept by the analyst and then inserted into a book on therapeutic telepathy because....the therapist believed this patient could read his mind?
Email Post
Labels: Archeology Books Haunted Magical Thinking