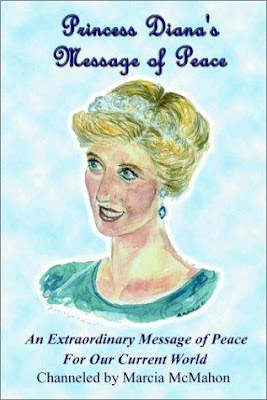 As many no doubt remember, Princess Diana was England's biggest movie star until the Queen killed her by forcing "Lady Di" and her pal Dodi to hitch a ride with a drunk Parisian.  Elton John changed the words to "Saturday Night's Alright for Fighting" and sang it at the funeral.  It's probably on the YouTube somewhere.

In May of 2001, Marcia McMahon was lying in bed with pneumonia when she suddenly "felt a presence" in the room.  She deduced this presence to be Lady Di, most likely because she had just been reading The Celestial Voice of Diana by Rita Eide, described here as a "Norwegian channel for Diana."  Though sick in bed and having, by her own admission, just read about spiritual transmissions from Princess Diana, McMahon was nevertheless convinced that she, too, was now in contact with "England's Rose."

"Together," McMahon and Di decided to write a book about educating children for the new millennium (starting, one hopes, with a lesson on hallucinations and "fever dreams").  Things were going swimmingly until the terrorist attacks of September 11, 2001.  Though you might think a Princess who was in heaven with her boyfriend wouldn't really care all that much about the twists and turns of mortal history back on earth, she is in fact completely wigged out by the situation.  The bulk of this book transcribes Diana's thoughts on the geo-political situation in the wake of the attacks, punctuated by occasional observations from Dodi.  As he is Egyptian, most of Dodi's advice (reported to McMahon by Diana--we never hear from him directly) involves telling "moderate" Arabs to stay cool.  He also offers a few thoughts on the true meaning of "Jihad," and how Islam has been "perverted" by al Qaeda (so basically, Dodi is reading the CNN ticker).

At first Diana urges restraint, telling McMahon that the U.S. should resist any impulse to begin a global military conflict (A question from the back of the room?  Yes?  Why did Princess Di contact McMahon and not President George W. Bush?  You need to shut your pie-hole, muggle).  By September 28th, however, the former Princess is--like many Americans--in full freak-out mode, warning from her celestial perch on high that the terrorists have biological and chemical weapons that they hope to disperse from airplanes.  A few days later she "says" this:

I caution you about the airplanes, for that is where they wish to strike.  It would be wise to implement plans of actions for each airline, so that they have adequate defenses in the cockpit for the pilot, be it arms or be it a gas or stun gun.  And I ask that the stewardesses and stewards be trained and possibly armed.

In this same session, Dodi horns in to warn Palestine that taking any radical action will only harm their future prospects for peace.

On October 27, 2001, Diana rings up the psychic hot-line in order to extend her thanks to Elton John for his "marvelous concert last night," thereby proving that we will all still have to listen to "Crocodile Rock" in the after life, like it or not. 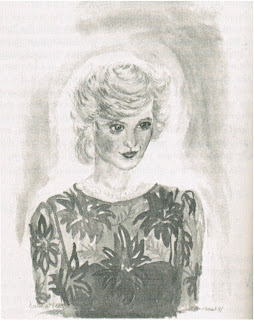 December 2, 2001 also proves to an eventful day.  McMahon wonders aloud to Diana if things might have been different if Al Gore had been President instead of Bush.  Diana concedes this is interesting conjecture, but ultimately pointless.  She then tells us that the recently deceased George Harrison has arrived in the spirit world and is "adjusting quite well."  George, we learn, "influenced the magnetic grid surrounding the earth with his music," which I would like to think is spiritual science's empirical validation of just how truly awesome "All Things Must Pass" is.  McMahon wants to know if Harrison has been reunited with fellow Beatle spirit John Lennon.  "They will meet at the appointed time," says Diana, thus demonstrating that even in heaven famous celebrities have very crowded day-planners.

And so it continues.  Diana advocates for a Palestinian state, while also assuring us that the terrorists really do have biological and chemical weapons with plans to use them very, very soon.  Elton John receives several more shout-outs (so that once again we must ask, why didn't she manifest herself to Captain Fantastic directly?  I know if some famous spirit kept asking me to relay messages to Roger Daltry or Dennis DeYoung, I'd get pretty surly about it in short order).  As late as May of 2002, the Princess is still prattling on about arming all the pilots and the stewardesses.  After a final call for U.N. peacekeepers in the middle east, Di and Dodi are outta there, or at least out of McMahon's mind.

In an epilogue, McMahon finally ponders the question: "Why me?"  The answer, apparently, is because McMahon is an "American" and can spread Di's wisdom to the U.S.A.  Sorry, fellow citizens, if she didn't pick you.