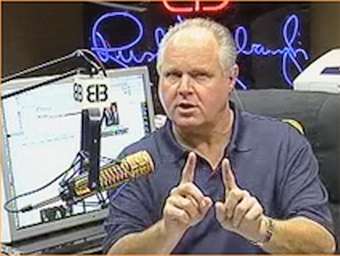 I tuned into the Limbaugh Institute for Conservative Studies today (fyi: that's what El Rushbo calls his show sometimes, poking fun at higher education so as to reassure his dimwitted dittoheads that anything above a tenth-grade education is the devil's work).  As a student and aficionado of psychotic episodes, I enjoy listening to Rush every so often to see just how much further the right has spelunked up its own delusional asshole.  Rush isn't crazy, of course, but his audience generally is. And with Art Bell off the air for many years now, Limbaugh-land has become the last refuge for the functionally insane, people who can apparently operate a motor vehicle and a cellphone while still believing that Obama plans to overturn the 2nd Amendment by buying up and then hoarding all the nation's bullets, probably in the basement of the Harvard library.

I also tuned in because Limbaugh's syndicator has supposedly resorted to running blocks of dead air in the wake of Rush's humiliating admission that he has no clue how contraception works ( every act of intercourse requires taking the "pill." More sex = more pills, reasons Rush).  Sad, isn't it, that we are forced to debate issues of public policy with a little boy who apparently never had "the talk" with his parents?  When I was in elementary school, some junior high wisenheimer told a bunch of us that f@#king happened when a boy kissed a girl while peeing (an understandable distortion, perhaps).  If I had finally learned that wasn't true in high school, I would have been embarrassed.  If in college, I would have been mortified.  If in my thirties, I would have been suicidal.  So imagine what it's like for Rush--married four times--to admit, in front of millions of listeners, that he has absolutely no clue what goes on up there in them secreted ladyish parts each month.  It's like Steve Carell's cringe-worthy descriptions of breast groping in The 40-Year Old Virgin, except in some nightmare of political black comedy, Limbaugh's 6th-grade-level misunderstandings of basic science actually have an impact on public debate.

I wasn't disappointed in my psycho-trolling.  Within two minutes of tuning into Rush's program, a dittohead from North Carolina called to rant about the latest Obama outrage.  He began with the usual fever dream: Obama ran for the Senate and Presidency because that's just how much he hates America.  He hates America so much, in fact, that he has devoted his entire adult life to mastering its political institutions, apparently for the sole purpose of demonstrating his contempt for the Constitution as "white man's law."   Now, if righties truly believe this, you'd think they would at least have some begrudging admiration for Obama (aren't old Republicans watching the History Channel all day the first to argue that Hitler was "evil," but also "a genius?").  After all, this familiar line of Obama-hatred is a little like accusing a brilliant neurosurgeon of mastering the craft just so he can stab brains with a protractor, presumably to demonstrate how much contempt he has for the white man's medicine.  But they can't respect Obama for his diabolical genius because, of course, he is also an idiot (where are those grades?)

They really should be forced to pick sides; in fact, I would gladly fund a mailer to distribute in GOP voting districts asking the following:

Which statement most accurately reflects your beliefs?


A. Despite the seemingly insurmountable obstacle of having been born in Kenya, Barack Obama has nevertheless skillfully manipulated the civic, political, and media institutions of the greatest democracy on earth, blessed with the smartest and most Godly people in all of history, so that he might become the illegitimate President of the United States, and thus one of the most powerful people in the world, for the sole purpose of making sure everyone becomes dependent on government food stamps.


B.  Obama is a stupid liberal who don't know shit 'bout nothin'.

If you do not understand the two positions described above, please have your liberal children or grandchildren explain it to you next time they come back from fornicating at college.


But NC-dittohead had a more specific complaint than Obama's general hatred of all things American. He was particularly incensed that the Administration had recently issued a waiver allowing members of the Arapaho Nation to continue hunting the American bald eagle on their own land.  Why?  Because the Arapaho have a spiritual investment in eagle hunting, and they were suing the government to continue such hunts as an expression of their "religious liberty."  NC-dittohead was beside himself with anger.  How dare Obama and his liberal allies allow different groups and minorities to basically make up their own laws! The bald eagle is the symbol of America, and it should remain illegal for all Americans to hunt them.

Now, you might think that the ultimate goal of GOP Federalism is to return legal control to the states, and then later to the county, the township, the neighborhood association, and then finally your own yard ("No universal health care as long as I'm mowing this lawn," proclaims King Dad).  But apparently not.  When "local control" and "religious freedom" involve hunting an eagle, suddenly the dittoheads are ready to name that bird James Meredith and send in the National Guard.

And here's how I know Rush is losing it, that his "peeing while kissing" moment has rattled him to the core.  Rather than see the potential dangers of following this guy down a rat-hole of illogic, one that Limbaugh had himself helped dig over the past few weeks, Rush fully endorsed this moron's outrage.  How dare the federal government allow for exemptions based on religious freedom!  Federal law should be sacrosanct and followed by all Americans...no exceptions!

Usually if Rush senses trouble, for himself, the caller, or the show, he finds a deft way to angle out of the unfolding logical absurdity. Not this time.  After telling us for weeks that Catholic institutions should have the right to refuse funding birth control in their health plans for reasons of religious freedom, Rushbo and his ditto-army lather up over the idea that a few thousands members of the Arapaho nation be allowed to engage in symbolic eagle hunts as a part of a religious ceremony.

Why?  That should be obvious.  The bald eagle is the majestic symbol of all things American.  Any religious belief that does not accept that self-evident symbolism is so absurd as to be unworthy of any Constitutional protection.  But if you think old white men are the best judges of what women should do with their bodies, your regular, normal, and thoroughly "correct" religious beliefs must be protected all the way up to the Supreme Court.

This is the world they, and thus we, must live in, at least until the collective GOP brain catches fire and explodes like one of those ditto-robots asked to compute two contradictory positions at once.
Email Post
Labels: Animal Kingdom Conventional Politics delusions Fatal Strategies Just Depressing