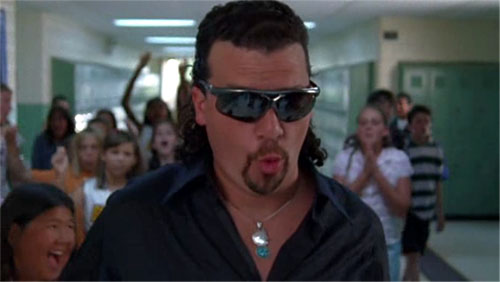 Being a dumb white guy just gets harder and harder.  Look at Rush Limbaugh.  The idea that there are more and more smart, young, educated women walking around out there who have absolutely no interest in him, sexually or politically, has apparently driven him clinically insane.  Everyday he can be seen on his weird glitchy webcam bouncing around like a rubber ball stuffed with bile, so completely bonkers that his internal censor now has completely lost the ability to displace his sexism into anything even approximating humor.   I actually agree with most righties that Rushbo is primarily an “entertainer,” a Will Rogers of the knuckle-dragging right.  But go back and look at how tentative he is in calling Sandra Fluke a “slut” and a “prostitute”—there is no joke-work there, just the empty outline of a concept for a joke.  He seems to realize it half-way through the “routine,” pulling back a bit as he delivers the “punch-line.” Of course, it doesn’t help that Rush apparently didn’t understand how birth control pills actually work (as pointed out by Rachel Maddow, et. al., Limbaugh seems to believe that the pill works like a condom—the more sex a woman has, the more pills she needs).  And then, only days later, he attacks another young woman for writing an award-winning book, incensed, it would seem, at her suggestion that Americans might not eat so many greasy salt/sugar bombs at their local thematized eating arenas/compulsory mirth zones.  But fear not, Rush, if you want to continue stuffing yourself with the new SweeTart encrusted “flamin’ hot” Teriyaki BBQ Stuffed Onion balls at your local TGI McBennington’s Chili Factory, go for it.  It remains, despite what you think, a free country.
Which brings me to Eastbound and Down, now in its third and final season on HBO.  Here is a spectacle of downscale white masculinity that actually is funny, no doubt because the series—unlike Rush—has a better sense of its central protagonist’s uncertain place in history.  For those who haven’t seen the show, Eastbound is a collaboration between Danny McBride, David Gordon Green, and Jody Hill—southerners all—centering on washed-up relief pitcher Kenny Powers (McBride) as he attempts to make his way back to the major leagues.  In the new season, Powers is pitching Double-A ball in Myrtle Beach and adjusting to his unexpected and phobically unwanted role as a new father.  The writers have also decided to go out with a brutally honest revisiting of Bull Durham (1988), giving Kenny a young Russian protégée who has absolutely no time or respect for the “wisdom” of his pathetic has-been mentor.
On paper, Kenny Powers might seem every bit as loathsome as the character played by Rush Limbaugh.  Like Rushbo, Kenny is also a vulgar narcissist who frequently crosses the line into wholly inappropriate behavior  (his penchant to curse like a sailor in front of small children is a particularly endearing gag throughout the series).  His interactions with women would make a caveman look classy, and his views on race come uncomfortably close to those of John Rocker (the former bubba-ballplayer who once said of the cultural miracle that is New York City: “Imagine having to take the 7 train to the ballpark, looking like you're riding through Beirut next to some kid with purple hair next to some queer with AIDS right next to some dude who just got out of jail for the fourth time right next to some 20-year-old mom with four kids. It's depressing.").  Powers is like that sometimes, only funnier.  Oh, and back to Rush, both he and Powers are not strangers to the world of hillbilly heroin. 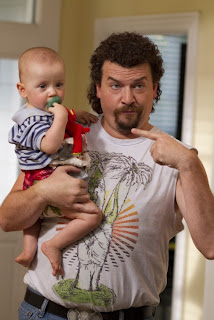 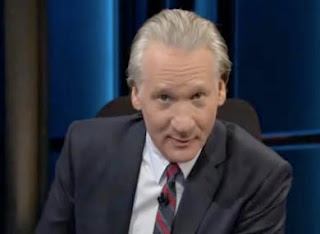 Contrast this with another HBO product dedicated to the world of contemporary politics: Real Time with Bill Maher.  Many folks on the progressive-left, I imagine, have a somewhat tortured relationship with Maher.  I know I probably agree politically with about 95% of the positions he espouses on the show, and I am grateful to have a forum where such issues can be addressed outside the convention-bound timidity of the center-right journalism machine.  But after each episode I have to ask, “Do I come off that smug when I talk about these issues? Good lord, no wonder no one wants to be around me, especially anyone who might disagree with me about anything.”
One of Maher’s ongoing difficulties is his absolute mystification that anyone would be so stupid as to not live in Los Angeles or New York.  On this week’s episode, for example, Maher screened a short video piece by Alexandra Pelosi (documentarian and daughter of former House Speaker Nancy Pelosi, a point that normally I would let slide, but in this context seems crucial).  Perhaps aware that his audience is smart enough to understand that the “documentary” format is anything but objective, Maher read a sort of disclaimer before the segment (sent in by Pelosi) explaining that the people we were about to see in the piece had not been pre-selected to make a point.  Pelosi, we were told, did not seek these people out, they sought her.  And then the piece begins.
We see a “Welcome to Mississippi” sign by the interstate accompanied by the voice-over, “Welcome to Mississippi” (Pelosi is no Errol Morris, apparently).  There then follows a cross-section of snippet interviews with dirt-poor rural whites, old racist coots, paunchy gun-lovers, and voice-hearing evangelicals.  All are united in their hatred of Obama, and democrats generally.  One hates the government but is on food stamps.  Another doesn’t hate Obama because he’s black, but because he’s a “half-breed” and a Muslim.  And so on.  In short, it is Dixiephobic porn at its finest. 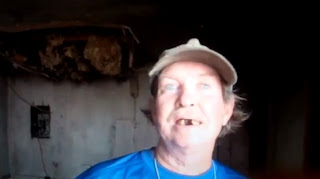 One might argue that if Pelosi’s goal was to find an assortment of toothless racists ranting about Obama, she might have saved some time and money by simply driving out to Barstow.  One also has to wonder about her claim that her portrait wasn’t a trick of editing—I know Mississippi is the poorest state in the nation, but do you mean to tell me there isn’t a single middle-class neighborhood anywhere to be found?  There are, in theory at least, a few doctors, lawyers, and educators in the state, no?  (Apparently Pelosi will film some city folk for her next segment—still, loading up on toothless untouchables for the first installment has implications of its own).
As with Kenny Powers, the fact that Maher would in essence “apologize” for the piece in advance (by vouching for its “authenticity”) is very telling.  Maher has at least learned over the years to feign some empathy for the structural production of uneducated ignorance “out there” in the heartland.  Perhaps most insufferably, Maher likes to brag that he still performs in places like Birmingham, Alabama because he “hasn’t given up on these people,” ignoring the fact that 1). the only people in Birmingham showing up to his gigs are most likely locals and transplants who already agree with him; and 2) he comes off sounding like the Rudyard Kipling of bi-coastal condescension, taking up the “liberal man’s burden” to make white southerners (or Midwesterners, or Texans, or mountain people, or whomever) understand just how shitty their lives and brains are. 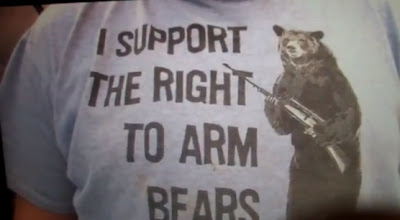 Sometimes this perspective makes the recognition of even simple irony impossible.  In Pelosi’s film, for example, the camera at one point lingers on one guy’s T-shirt slogan: “I Reserve the Right to Arm Bears.”  The T-shirt’s message is presented as a self-evident example of 2nd Amendment insanity, even though that very same T-Shirt has been available at Urban Outfitters and other hipster boutiques for years…probably because it’s funny.  Some uneducated Mississippians might be stupid, and they might love their guns—but I doubt anyone is sincerely in favor of distributing shotguns to bears, especially if the only reason to do so is to get Obama mad about it.


As envisioned by a trio of college friends all born and raised in the south, Eastbound and Down might also be accused, at least on occasion, of indulging urban elite prejudice (the opening montage of Myrtle Beach from this season unfolds like a Manhattanite’s vision of hell, making the town look like nothing more than an endless strip of water slides, strip clubs, and themed restaurants).  But at least Hill, Green, and McBride have the experience of growing up surrounded by a few dozen Kenny Powers  (and maybe even some people who weren’t necessarily obnoxious rednecks).  The idea that Kenny might be redeemed, by the love a good woman, certainly, but also by some tiny yet significant amount of consciousness-raising, is itself somewhat paternalistic perhaps—but it at least recognizes that the often reactionary paranoia attending some pockets of contemporary white masculinity is more complicated than merely having bad hair, no teeth, and a love for gas-powered aquatic recreation.
At the end of this season’s second episode, for example, Kenny once again confronts his old nemesis Ashley Schaeffer, a trash-talking, dick-slapping auto dealer who revels in humiliating Kenny whenever possible.  Having lost his BMW dealership, Schaeffer now sells Kias, and in this particular episode, forces Kenny’s sidekick Stevie to perform as a Geisha Girl for a group of Kia executives visiting from “the island nation of Korea.”  The scene casts Schaeffer as some type of postmodern plantation boss, dressed in a string bowtie and extolling the erotic temptations of his mammy’s dumplings.  Kenny bursts in to the party to save Stevie from his Kia servitude, prompting Schaeffer to strike a deal.  He will release Stevie from his bondage to the dealership if he and Kenny will agree to provide the evening’s entertainment by attempting to outrun a few confederate cannonballs discharged in Schaeffer’s back yard. 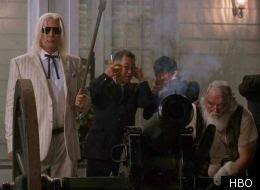 The sight of baseball great Powers and his Geisha-dragged pal desperately trying to evade this exploding nineteenth-century ordinance, all for the pleasure of Schaeffer’s new Korean bosses, has to be one of the most surreal moments on TV this year.  And while I’m not entirely sure what it all means in terms of the new global economies of race, class, and gender, it somehow makes me more hopeful than Maher’s crocodile tears for those pockets of the South that he needs in order to put his coastal enlightenment in better relief.  Eastbound speaks to the weirdness of the New South as it gradually re-constitutes itself--racially, demographically, economically, and so on. Maher seems stuck on a comfortable caricature of Dixie that, by virtue of age and poverty, can't be long for this world anyway.
Email Post
Labels: Conventional Politics Intentional Comedy Popular Sublime Regional Conflicts The TV