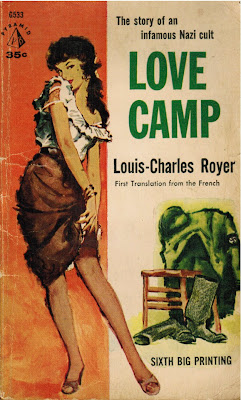 Love Camp is a surprisingly restrained dramatization of life within the Nazi Lebensborn program, an initiative under Heinrich Himmler to curb Germany's abortion rate and produce "racially pure" children for the Third Reich.  Begun as an orphanage and charity house for widows of the S.S., after the war many described Lebensborn as an Aryan brothel, bringing eugenically selected young women to live under one roof so that they might be impregnated by an equally select group of Nazi soldiers.

This is certainly Royer's take.  In part one of Love Camp, the patriotic Dr. Werner tours the German and Austrian countryside in search of suitable young women to take back to Venusdorf, a remote monastery on a lake refitted to host week-long mating furloughs for the soldiers.  Meanwhile, as Werner looks for good breeding stock, Royer interweaves the stories of the three soldiers selected by their commanders as most deserving of this assignment.

In part two, Royer documents daily life at the camp while following the story of the three "couples" who find themselves matched for reproductive service to the Fatherland.  A day at Venusdorf consists of the young Frauleins assembling in the morning for nude calisthenics and swimming, after which they are paraded single-file (and still nude, of course) past the most recently arrived soldiers.  Each soldier picks the woman he finds most alluring, and they spend the rest of the week shacked up in private bungalows along the lake.  The other women, meanwhile, continue their daily routine until selected.  All of this is under the watchful eye of Frau Flitter, a thirty-something matron who rules the women with an iron fist while also offering them special "comfort" in the loneliness and shame that comes with not being selected...by men. 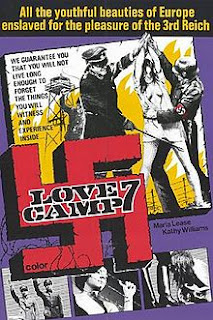 There is also Cordelia, the enthusiastic leader of a Hitler Youth group, who takes the train to Venusdorf to volunteer for the program.  Homely and skinny compared to the other women, it is Cordelia's great hope that a soldier will select her for her superior intellect.  That doesn't happen, of course, but she does at least distract the elderly Dr. Werner from his scientific enthusiasm for the project long enough to become pregnant herself--an embarrassing development given that no soldier has picked her.  Werner finally realizes he can blame the child on a rogue solider thrown out after only a day at Venusdorf for trying to move in on the women already chosen by other soldiers.

The "couples" in the second half suffer various and diverse fates--protracted disgust, love at first sight, etc. Offended by the barbarism of it all, an upper-class pilot selects a similarly upper-class friend (sent to Venusdorf by her vengeful father) so that he might protect her virginity for one additional week.

The Lebensborn program would return in even more distorted and lurid form in the 1969 grindhouse title, Love Camp 7, a film so patently offensive that it remains banned in the U.K. to this very day.
Email Post
Labels: 1950s cults: real and imagined nazisploitation pulp Sleaze slightly disgusting