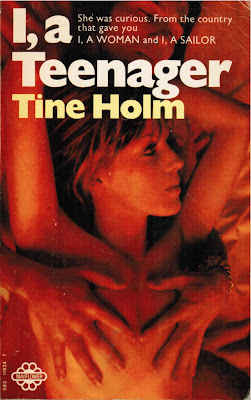 Danish Bildungsroman of 14-year-old girl named Stine who, though madly in love with Jens, finds herself continually frustrated by her boyfriend's emotional neglect and refusal to communicate. Without telling her family, Stine takes the train down to her grandmother's beach house to spend her winter break getting her thoughts together.  There she falls in with some German tourists camping on the beach and almost has a fling with a guy named "Knud," but his attempt at an unusual sexual position puts Stine off the proceedings.  Returning to Copenhagen, she briefly reconciles with Jens, but after another tremendous fight, becomes infatuated instead with an older guy performing at the local theater.  At first Mikael is worried that Stine is under-aged, but after they sleep together and neither Stine nor her parents seem particularly outraged, they decide to live together in a tiny basement apartment.  This eventually leads to a marriage proposal and Stine decides she will throw a big engagement party complete with French-fried potatoes (cooked by an interesting side character--a mopey American named David doing the whole Europe and philosophy trip).  But once the big party day arrives, Stine feels invisible amidst all of Mikael's older friends and so she breaks off the relationship later that night.

Moving back home, Stine begins spending her days hanging out with an art student at a local museum, which eventually leads to a one-time tryst in a empty passageway somewhere in the gallery's rafters.  She also finds a sick duck and nurses it back to health.  But who should come back into Stine's life at this point but Jens?  He's very sorry for treating her so badly and asks Stine to move in with him.  She does, but soon they are back to their same old fights.  Stine has a passing infatuation with a waiter at a jazz club, but nothing comes of it.  Then Jens insists she take her stuff and move out, which she does, squatting at the apartment of her completely Platonic older friend, Anders.  Jens comes over one night and says he didn't really want Stine to move out, that he was just kidding, but now he's suspicious of her relationship with Anders.  She assures him nothing is going on and agrees to move back.  As the book ends, some two years after it began, we are told that she still fights with Jens all the time, and yet somehow "everything was different, even though I was never able to figure out exactly how we had changed."

That's pretty much it.  Though marketed as a sleazy romp through sexy Scandinavia, the book actually has more in common with Judy Blume than the other notorious "I" titles of the era like I, A Woman, I, A Sailor, and I Am Curious Yellow.  Chock full of details about the streets, bars, and neighborhoods of Copenhagen, circa the mid-1960s, for those who might have an historical interest in such things.
Email Post
Labels: 1960s has ambition Scandinavia Sleaze teens what girls think about