First of all, credit where credit is due.  Thank you, Hollywood, for finally making a film this summer that didn’t make me wish I had stayed home to express my cat’s blocked anal gland with a Q-Tip.  Rise of the Planet of the Apes is actually really, really good.  Surprisingly good.  True, it did require the industry to dip back into the stockpile of science-fiction ideas that existed before Star Wars transformed the entire genre into little more than an endless sword ‘n’ sandal flick with more and better weapons, but if that means getting a Zardoz reboot next, I’ll take it.
If anyone reading this is in or near Malibu, by the way, please kidnap Michael Bay and force him to see Rise immediately so that he might learn the basics of scene articulation and narrative structure.  If Rise can make me misty-eyed over a big, dumb ape taking out a helicopter, surely Bay can learn how to help us keep track of who is a Transformer, who is a Decepticon, who is Shia LeBeouf, and why we should even care in the first place.   Okay, obligatory Bay = State of current cinema joke out of the way, let's proceed...
Let me say this:  I wish Rise of the Planet of the Apes were happening right now.  I wish super-intelligent apes were swinging through the trees this very moment ready to lay waste to our sorry civilization.  It’s about time another species took over for our terrible stewardship of the planet and of ourselves.  Millions starving.  Inequality increasing.  Axe Body Spray still on the market.  At this point, the ghost of Paul the psychic Octopus deciding affairs of state with an aqua-Ouija board could probably run most governments better than we humans.  And look, we all know this movie is only showing us our inevitable future.  Apes may not learn to talk and organize themselves into medieval fighting formations, but it’s even money we end up taking ourselves out with a virus that we will probably invent for profit.  It may be an additive used to extend the shelf-life of Cheezy Bread Stix or a fine mist Steve Jobs sprays into the atmosphere to make Apple users misplace their dongles and cords that much quicker, but it’s going to happen, we’re going to take ourselves out in a way that is cosmically embarrassing.

That’s why it’s so great that Rise targets San Francisco as the first city to go—It’s an open attack on all the Trekkies out there who imagine that Frisco will be the gateway for projecting our boring, homogenized cultural differences of the future out into the universe so that we can lecture other cultures (alien ones, no less) on what they should and should not be doing.  You say the future is a bank lobby in space where we all obey the prime directive whilst discovering every civilization in the universe has its own form of brightly colored liquor?   I say it will be genetically mutated monkeys ripping out our tracheae and kneecaps just for the hell of it.
In this respect, I always thought Spielberg missed a real opportunity with the Jurassic Park series.  After humans stupidly brought dinosaurs back to life, wouldn’t it have been great if a bunch of pterodactyls got loose, bred in such numbers that we couldn’t really control them, and then occasionally swooped down to snatch away house pets and small unguarded children?  Not so often that we had to declare a “War on Pterodactyls,” obviously, but maybe with the same frequency as people being hit by lightning—just enough to remind us of what dumbasses we were for bringing dinosaurs back to life in the first place, or for trying to play an extra hole of golf in the face of an advancing thunderstorm.  I salute Rise for having the courage to remind us that it is often our very intelligence that makes us the stupidest ape of all.  Imagine how much more free and full of life you’d feel if you could simply entertain yourself by throwing your own feces at various comic foils, as opposed to feeling dead inside after paying $14 to see Kevin James do it for you (wait, crossover alert: the mad-as-hell apes of Rise invade Zookeeper, radicalize the non-human primates, and then all escape the film to leave their bewildered human cast-mates wondering where the next fart joke will come from). 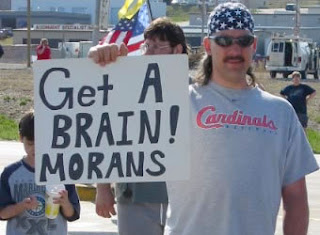 Like all science-fiction, Rise of the Planet of the Apes is of course an allegory.  I’ve heard many say this week, either in jest or quite earnestly, that the film is a great parable about the Tea Party—angry right-wingers as angry apes rising up against their oppressors.  That’s a really nasty swipe, of course, seeing as how gratuitously insulting it is to apes.  After all, the apes of Rise all learn to cooperate for the common good.  They share their cookies and divide the labor “from each according to his need, to each according to his ability.”  They also learn very quickly how important it is to get a good education, as in that scene where the guard catches them all going to night school.  Say what you want about how smelly, dirty, or damned they might be, but an ape isn’t the type of creature that would prefer to shit in coffee cans and stack them on his neighbor’s property line rather than pay that extra penny in sales tax to refurbish his community’s sewer system.  No, an ape is smarter than that.
Actually, as far as parables go, I think the film is much more interesting in its kinship to the zombie genre.  A few years ago I delivered a paper in London (at the Cine-Excess conference) on the zombie film as a rather playful indulgence of a collective and accelerating social death-drive. Zombies are scary—particularly those British ones that cheat by running extra-fast—but there’s also something exhilarating in seeing the entirety of our social world absolutely destroyed.  After all, what’s so bad about being a zombie?  You’re still somewhat sentient, apparently, certainly more so than if you just watched 100 Ways to Leave a Game Show or paid actual attention to the last Katy Perry CD all the way through.  Moreover, the only thing that can kill you is a clean brain shot—and once everyone else in the world is also a zombie, that isn’t very likely to happen.  Zombies don’t have to work or pay mortgages or worry about their personal appearance anymore---what’s not to like? 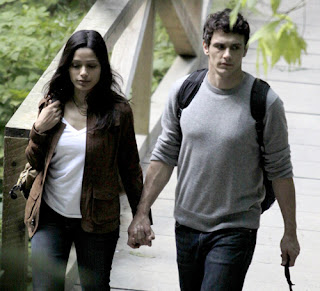 If anything, Rise is even more candid and enthusiastic than most zombie films in indulging our desire to watch humankind snuff it—you’re on your feet by the end cheering the primate army as they hoist us brainiacs by our own R&D petard.  Hurray for the noble apes!  Hurray we’ll all be coughing up blood and dying soon!  True, it’s a shame the death of humanity will mean no more incredible specimens like James Franco, Freida Pinto, and the hypothetical primates they might spawn, but that’s a small price to pay for exterminating assholes like that guy in the Ape house with the cattle prod or the pilot-neighbor-from-hell living next door.   If I had a neighbor like that, I’d be personally injecting local raccoons with anything I could find in the hopes that one would eventually turn sour and spray his patio furniture with some form of mutantly toxic urine.
So kudos once again, Hollywood, for getting it right this time.  I eagerly await the next installment when all the CGI Apes are rather surrealistically talking (which I hope will be even weirder than imagining Roddy McDowell’s mouth flapping behind the latex in the original series).  I also hope the sequel has the guts to show thousands of Americans waiting around to die from the mutant virus, sad they will soon be no more, but ecstatic that they didn’t have to see their tax dollars wasted on government medical research or to support the implementation of Obama’s goddamn socialized medicine scheme.
Email Post
Labels: Animal Kingdom Bio-Horror Fatal Strategies Filmed Product