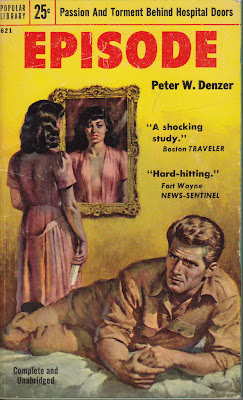 Twenty-year-old Arnie Bronson is sick.  Life in the army has so worn him out that he ends up in the base hospital with pneumonia.  Pumped full of antibiotics and sulfa drugs, Arnie is unconscious most of the time--although he is vaguely aware of his troubling nightmares.  And then one day, just as he seems to be getting over his infection, two MP's roust him out of bed and escort him across the base to another building...the psych ward!

And thus begins our trip into one of the most Kafkaesque of pulp subgenres--the "trapped in an asylum" story.  These books usually have very similar engines running them: the more the protagonist proclaims his sanity, the more those around him believe he is insane--narrative "progress" is marked by transfers between wards, from the slightly neurotic to the full-on psychotic.  At first Arnie is only confined to a ward of high-functioning, low-security cases, but the inevitable violent outburst at the injustice of his incarceration lands him in the dreaded "padded cell" up on the hospital's psycho floor.  From there, things just get worse until eventually Arnie and the reader both realize Arnie has in fact gone "crazy."  He is having, as the title tells us, an "episode." Whether he was mentally ill before he arrived in the psych ward, or if the psych ward itself made him mentally ill, remains unresolved through the rest of the book.

Arnie's bouncing from ward to ward is so precisely documented here that that one has to suspect Denzer wrote this with some amount of autobiographical detail.  Arnie seems to be recovering and makes his way back to the lower floors--but then a transgression of one sort or another lands him back in isolation amid the other schizophrenics.  This bouncing around takes its toll and Arnie drifts deeper into psychosis--a process that Denzer handles rather deftly as a gradual retreat from the surrounding world.  After a month or so in the army hospital, Arnie has lost all sense of time and purpose, his only "link" to the outside world a series of nightmares starring his teenage girlfriend, Julie, whom he has not seen in over a year.

As is so often the case in pulps, the cover of Episode (front and back) implies there will be some form of sordid sexual affair (passion and torment behind hospital walls!)  A third of the way into the book, however, and it becomes obvious Denzer is more interested in telling the complete story of a schizophrenic arc from initial breakdown to (tentatively) final recovery.  After Arnie hits rock bottom at the army hospital, his father at last intervenes to have his son transferred to a private hospital in upstate New York.

Arnie is still in bad shape at the new institution--but two wonders of 1950s psychiatric care intervene on his behalf: Freudian analysis and shock treatments.  After just one shock treatment, Arnie miraculously snaps back to the real world and considers himself cured.  But his psychiatrist tells him to slow down a bit--he's still sick and they need to find the real reason for Arnie's episode.  Here the novel drags a bit as we get a series of extremely significant dreams (involving ex-flame Julie) that are subjected to extremely significant analysis--of interest, really, only to those who would like to read several pages of fake dreams subjected to fake interpretation.

After a few more courses of ECT and what seems like a dozen "Julie" dreams, Arnie seems well enough that they trust him to go out to the movies one evening with his parents.  Little does everyone know, however, that Arnie is so fed up with being institutionalized that he is planning his big escape.  He ditches his parents at the theater and takes the train into Manhattan where, after wandering through Central Park for awhile, he somewhat aimlessly (one might say, unconsciously) ends up on Julie's doorstep...where of course the police are waiting for him. 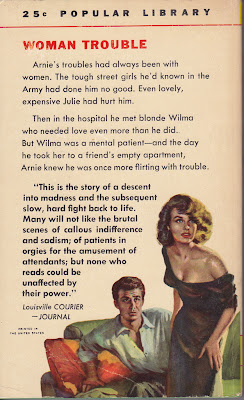 Let's try another hospital, shall we?  Arnie is moved to a new facility overlooking Riverside Drive in New York.  Here he meets an unconventional psychiatrist who is more of a buddy than a Freudian.  It is also a co-ed facility, so at long last, some two-thirds of the way into the story, the sordid scenario promised on the cover might at last come true.  And it does--slowly.  Mainly Arnie sits around talking to his new pal about how and why he cracked up and went schizo.  The doctor, meanwhile, tells Arnie he's basically "cured," but it would be best to stay in the asylum for awhile and marinate before heading back into the real world.  This seems especially good advice given that Arnie has just learned that Julie is now married--to an Ivy League guy, no less, that she met at a writer's workshop in Vermont.  As he waits to get out, he slowly tries to strike up a relationship with Wilma--a patient who arrived at the hospital in full-on wildcat, crazy-hair, kicking and screaming mode, but who over the course of a couple of months cleans up to be the best-looking dame in the hospital.  Relationships between patients are against hospital rules, the doc reminds Arnie, but then again, it's not a rule anyone really enforces.

And so at last Arnie succeeds in luring Wilma to a friend's apartment, vacated for the winter.  The deed is done and Wilma, who formerly had been mostly indifferent to Arnie, is suddenly completely smitten.  The relationship continues on for a few weeks until, at last, Arnie is deemed ready to leave the hospital once and for all.

On the outside, Arnie gets a job and becomes just another New Yorker--working 9 to 5 and living in a small flat in the garment district.  He still sees Wilma every so often, but gradually the two drift apart.  Then one night Arnie comes home to find another recently released friend from the hospital on his doorstep.  Wilma's dead.  Suicide.  Arnie is devastated, but his pal gets him off the hook by saying Wilma's time with Arnie was the only moment of happiness in her life--rather than face being unhappy again, she decided to put an end to it all.  So really, Arnie was doing her a favor.

The book concludes with Arnie accepting an invitation to a dinner party at the home of Julie and her parents...along with Julie's new husband.  How does that go?  Suffice it to say, Arnie gets to make a final meaningful speech about their past, present, and future.

All in all a pretty good read, especially for anyone interested in mid-century psychiatry. And you have to respect the skills it takes to keep this type of story moving.
Email Post
Labels: 1950s going bonkers has ambition New Yorkitude not bad-pretty good in fact nurses psychiatry psychoanalysis Psychosis pulp