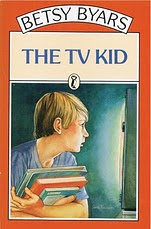 Lennie lives with his Mom who runs a motel out by the lake. Lennie really, really loves television, so much so that of late his grades have been slipping. He fantasizes about meeting The Partridge Family and competing on game shows. Lennie also enjoys sneaking into empty vacation homes around the lake. When a police car comes by on patrol one day, Lennie hides in the crawl space where he is summarily bitten by a rattlesnake. He imagines how TV Guide would describe his plight as an episode of either Medical Center or The Rookies. As he recovers, Lennie becomes extremely invested in researching and writing a school report on snakes. Back home, two girls his age staying at the motel express interest in Lennie's puncture wounds and beg to hear his account of the ordeal. Suddenly, Lennie feels less inclined to watch television. Moral: Anything, absolutely anything that happens in the "real world" (like getting fanged by a diamondback) is intrinsically more valuable than the "fake" experiences of television.
Email Post
Labels: 1970s kids Psychosis TV