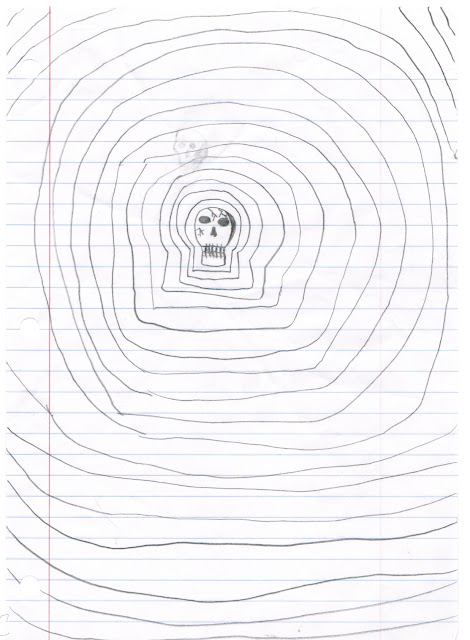 There is a store in Chicago called Uncle Fun's, described at its website as "a unique purveyor of fine goods and accessories designed to restore the whimsical nature with which you arrived on this planet." In other words, it's a store full of weird toys and odd ephemera, usually bought in bulk, and stuffed into every nook and cranny of the establishment for a type of retro-spelunking.  Little plastic presidents that once came in cereal boxes, original t-shirts for sub-Ratt hair metal bands of the '80s, old-fashioned classics like fake vomit and fake dog poo--Uncle Fun is your one-stop shopping destination for all this and more.

In a rather inspired idea, the store has of late started selling work by artists under the age of 10 (with all proceeds going directly to the artists--they even have a separate ledger and cashbox for their roster of young bohemians).  It's great marketing, obviously, because you're more inclined to support a store that would be so generous as to give kids the thrill of being working artists, at least for a couple of grade levels. I imagine them stopping by on the way home from school each day, a sno-cone in hand, to see if any big works have gone out the door.  And I assume $1 American still has some purchase in the 8 year-old mind, let's hope so at least.

After much consideration, I chose the untitled piece above.  It was one of several drawings on display that day by "Zac," who the curator informed me is one of the more popular artists represented by the store.   It's easy to see why.  With great confidence, Zac provides here his own take on one of the most familiar icons in boyhood drawing--the awesomely gnarly skull.  Note how Zac weaves together all the elements we expect in a good skull drawing: the clenched teeth; the spooky placement of the orbitals; the gruesome fractures running down from the crown.  I bet if Zac has a sister, she thinks this work is "icky" and "creepy," which no doubt made this portrait an unqualified artistic success for the young man.

It's a good skull, to be sure.  And we can appreciate the skill and effort that went into this drawing by considering the "ghost skull" hovering above and slightly to the left.  Clearly Zac originally envisioned this skull in 3/4 profile, but then made the more audacious decision to confront the horror head-on, and in so doing, force us to stare directly into the unnerving truth that broods within those vacant sockets.

Of course, some artists would have stopped there.  But Zac has chosen to embed this powerful skull within the conventions of another well-known boyhood idiom--the occult physics of evil projection.  This is no ordinary skull, clearly, for it radiates a form of hypnotic doom--undulating waves of evil spiraling out into the universe--perhaps towards Zac's sister.

Look at it for as long as you dare, but know this, I take no responsibility for what might happen to you should come fully under the power of this radiating skull of evil.
Email Post
Labels: Art on High Bio-Horror