I Am South Park! 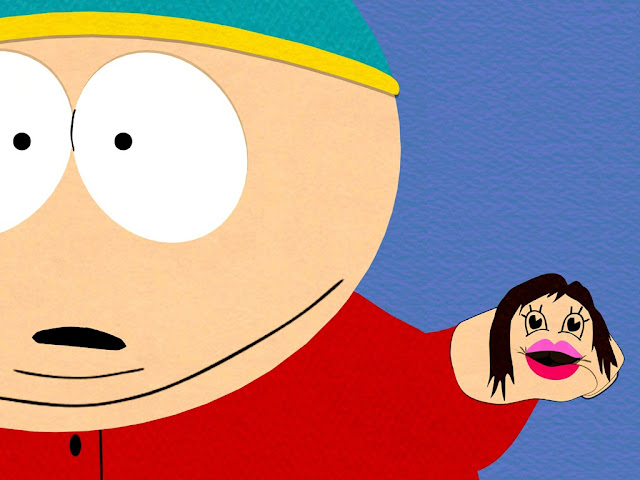 Figuring out the politics of South Park over the past fourteen years has always been somewhat of a challenge.  As far as ridiculing popular stupidity goes, Trey Parker and Matt Stone have been consistently inspired.  “Guitar Queer-o” remains unsurpassed as grumpy commentary on the bystander logic of virtual life, as well as the generational gulf dividing those who actually remember "Carry On My Wayward Son" and those who inexplicably continue circulating the song purely as annoying game data. Similarly brilliant: the episode examining how the young ‘uns have completely (or at least mostly) disarticulated all vestiges of homophobia from the word “faggot.”  Finally, Cartman’s hand possessed by Vietnam Vet Mitch Conner in drag as a taco-loving Jennifer Lopez giving Ben Affleck a handjob is perhaps the most brilliantly sophomoric negation of celebrity wankery ever aired on television.

For each of these gems, however, you have to sit through a tedious attempt at provoking controversy like the “manbearpig” episode, which seems to have had no motivation other than disliking Al Gore and calculating that skepticism about global warming would somehow be edgier than joining all the popular kids on the Eco-bandwagon. And Lord knows Parker and Stone can simply be dicks from time to time, like with those narcissistic swipes at Family Guy for not having exactly the same structure and sensibility as…well, South Park (somehow the world survived having both Charlie Chaplin and Buster Keaton—two comedians with diametrically opposed approaches to comedy—I think in the new multi-billion channel universe there is room for both South Park's juvie-picaresque and McFarlane’s dada factory.  Plus, can't both empires see they have common enemies in Dane Cook, Carlos Mencia, and Jeff Dunham?). 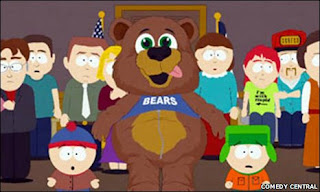 I suppose many would describe South Park as vaguely libertarian or even “post-ideological” (if such a thing is actually possible).  Whatever Parker and Stone’s putative politics may be, however, God bless ‘em for the new two-part episode currently garnering headlines, death-threats, and what has to be the most extraordinarily protracted sequence of censorial “bleeping” in the history of American television.  For those who’ve missed all the fun, Parker and Stone have once again drawn attention to their corporate master’s willingness to appease Islamic fundamentalism by censoring any and all representations of the Prophet Muhammad.  The first episode was an absurdist shell game that involved hiding Muhammad in a U-Haul Van and then later in a bear costume, a rather elegant way of demonstrating that there are worse fates in fictional life than direct caricature.  When this inspired some perfunctory wrath from some entity calling itself RevolutionMuslim.com, Comedy Central decided in the next episode to bleep even the name “Muhammad” (who as it turns out, wasn’t in the bear costume after all—it was just Santa Claus doing the boys a favor).  The second episode ended with a run of incredibly long bleeps censoring, not just objectionable words, but entire sentences and ideas.  As Parker and Stone state on their website:

It wasn't some meta-joke on our part. Comedy Central added the bleeps. In fact, Kyle's customary final speech was about intimidation and fear. It didn't mention Muhammad at all but it got bleeped too.

So in the world of TV comedy, the terrorists do indeed seem to have won…for now at least.  And in a somewhat pyrrhic victory, Parker and Stone have demonstrated once again that media conglomerates only really invoke P.C. sensitivity when it dovetails with C.Y.A. anxiety.

No doubt there is some legitimate concern here.  As an extension of Viacom, Comedy Central does not want to endanger personnel, property, publicity, and stock shares by provoking a nasty little incident at their corporate headquarters.  And who could blame them?  After all, why should one little cable network (even if it is part of a global media behemoth) shoulder this First Amendment struggle all on its lonesome?

But has no one seen Spartacus?  Specifically, isn’t there at least one industry vertebrate who remembers the scene where the Romans demand the slaves surrender their rebel leader, inspiring the men to stand up one at a time to proclaim, “I am Spartacus!”  In a class I’m teaching this term on the classical Hollywood Studio System, we’ve been looking back at how the industry—through both friendly cooperation and illegal collusion--used to work together to solve the various knotty little problems facing their collective empire: sound, censorship, rogue talent, rebellious exhibitors, etc.  While still in competition against one another, the old studios also realized that it was in their collective interest to solve certain structural challenges together.   So, like the mafia, once the movie family made a decision, it became the law of movie-land.

Given the intervening history of media mergers and conglomeration, such cooperation should be even easier today.  If the “media” wanted to solve this embarrassing little First Amendment fiasco once and for all, they need only cooperate and all stand up at the same time. For example, after NBC-Universal-Comcast finishes with its annual “Green Week,” why not recruit the rest of the industry to sponsor a coordinated celebration of “Secular Humanism” or even a week of programming that extols the virtues of agnosticism and atheism?  If every channel spent an entire week ridiculing every single organized religion, or indeed the very concept of organized religion itself, it would go a long way to diffusing the ability of any one sect to focus its wrath on an individual program or company.  Rather than see more tired jokes about thrifty light bulbs and the virtues of water conservation, I would much rather watch a 30 Rock wherein Liz Lemon loses her glasses and mistakes a crucifix for an EPT stick.  Or how about a trial on The Good Wife that radically contextualizes the historical genesis of kosher food practices?  Or maybe a special live episode of Deal or No Deal in which every suitcase contains, not only a money card, but also a tasteful portrait of Muhammad that Howie Mandell then faxes one at a time to RevolutionMuslim.com.

Better yet, perhaps there is a way to pit religious extremists against one another directly for our televisual enjoyment.  I see a reality show here, Battle Royale style, with various radical sects airlifted to adjacent training camps in the middle of Kansas where they are then encouraged to convert one another by the end of the month for cash, prizes, and the fate of all eternity.  I would so watch the draining of that gene-swamp that I’ll make a pledge right now to buy every product advertised on the show in triplicate. 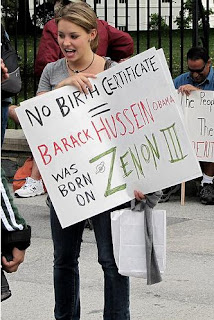 Sadly, none of these projects are likely to happen anytime soon, nor is the muzzle liable to be lifted from South Park should it ever revisit the Muhammad taboo a third time.  Those sympathetic to South Park's cause here have been framing this as a “First Amendment” issue, but I think the anger evoked by this latest example of censorial appeasement is actually more a displaced form of anxious fascination.  We are often led to believe that “freedom of speech” means protecting the right to express provocative ideas.  That may be true on a street corner, but in the media, the First Amendment has always taken on a slightly different inflection, serving more as a thematic device than an inviolable principle.  Accommodating “radical” expression, no matter what its source, is of less concern to commercial media than maintaining the pluralistic fantasy that we all respect, in theory at least, the principle of free and open communication.  In fact, most polite liberal pluralists are taught from a young age to respect the right of all people to believe whatever they want to believe, no matter how stupid, ridiculous, or even potentially damaging to the society at large, just so long as they are also willing to remain invested in the overarching principles of “balance,” “dialogue,” and open expression.  Even “birthers” and “truthers,” though clinically insane, remain loyal at some level to the principle of a democracy guided by freedom of inquiry, expression, and debate.

Everyone is entitled to his or her opinion as long as they also subscribe to modernity’s highest precept that all knowledge/belief is provisional and thus subject to debate, revision, and even occasional ridicule.  But from the fundamentalist perspective, what could be more insane than believing matters of religious faith are open to dialogue or discussion?   By refusing to play this Enlightenment game of honoring open and “rational” communication, radical Islam has very successfully thrown a monkey-wrench into the entire system.  While many are mad at Comedy Central and Viacom for a gutless stifling of South Park’s imagined  “freedom of speech,” much more unsettling is the realization of just how easy it has been for fundamentalists to derail three centuries of modernity by reverting back to the most primitive of all power configurations—moral absolutism grounded in magical thinking and bolstered by a willingness to commit physical violence.   As the South Park episode itself demonstrates so powerfully, there is now one lone constituency in the world that has effectively leveraged itself to a place beyond representation-- not by “winning” any arguments in the west's cherished forum of open debate--but by regressing quite effectively back to the impervious childlike logic of supernatural certainty.  Could we find a more persuasive example of the political advantages to be had in behaving like an irrational object rather than an "enlightened" subject, the gains one can accomplish simply by refusing to participate in another order’s system of meaning? 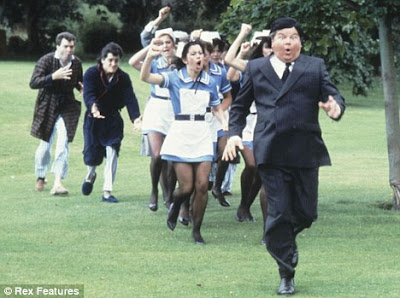 As Jean Baudrillard noted as far back as the '70s, terrorism's efficacy as a political tactic resides wholly in disrupting the field of meaning.  It has little to no impact in changing national boundaries or governmental policies directly, only the ability to shift frames of meaning and the conditions of debate.  What more stunning semiotic victory could there be, then, but to literally scare your opponent off the field and force him to sit mutely on the bench?  And as this is a struggle over images and signification, there is really no other way to fight back than through a massive and coordinated campaign of representational violence--not in the form of cheap shots and obscene insults, but through the very act of reclaiming the right to signify.  Someone needs to get South Park's back on this.  If we want to maintain any hope of eventually thinking our way through the various messes of human history, or failing that, at least have decent television programs, then fundamentalists of all kinds--those who would wed violence and mysticism--need to be invited to star in their own version of The Benny Hill Show, baited to chase multiple infidels, blasphemers, and other transgressors through a hallway of fake doors, prefably to the hilarious strains of "Yakety Sax".
Email Post
Labels: Conventional Politics Fatal Strategies Moral Panics New World Order The TV