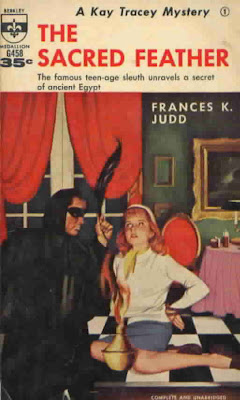 I bought this book assuming it was some form of campy bondage sleaze from the 1960s. Teen debutante with her arms tied behind her back and a flaming pot of oil between her legs.  A masked man clad in black brandishing an exotic feather.  The entire spectacle unfolding in a space that looks like Gidget’s bedroom transported within the walls of Versailles.  The sacred feather?  I mean, come on, look at the cover—how could this book have not arrived in a plain brown wrapper?

Turns out The Sacred Feather is one of eighteen stories in the “Kay Tracey” mystery series, originally published between 1934 and 1942. Here’s how the book jacket describes Kay’s scene:  Meet clever Kay Tracey, who, though only sixteen, solves mysteries in a surprising manner. Working on clues which she assembles, this surprising heroine evolves the solution to cases that have baffled professional sleuths. Written by a team of women under the pseudonym Frances K. Judd, Kay was essentially a knock-off of Nancy Drew and appears to have shadowed her in reprints through most of the 20th century.  This particular S/M iteration of The Sacred Feather is the 1961 paperback edition published by Berkley Books.


Like most mid-century fiction pitched at teens, the Sacred Feather is very good at avoiding any cultural references that might later date the books to a specific era—making their generational reprinting that much easier.  Although, given that the Kay Tracey books were last on the shelves in the 1980s, I would imagine any future attempts to bring her back will necessitate replacing her frequent phone calls with fingers-aflame texting  (OMG-BDSM guy brought a feather! LMAO).  She also has a friend named Wilma who likes to interject whatever couplets of obscure verse she finds appropriate to a given situation, but these nuggets of wisdom could probably be rewritten and reattributed to a Taylor Swifty character of some kind.  And adding a vampire or two probably wouldn’t hurt, especially a sexy, sexy vampire who stands longingly under Kay’s bedroom window all night, hands jammed in the front pockets of his drain-pipe jeans, mumbling dark poetry to himself until at last running off into the woods to suck a raccoon dry.


Despite the lack of topical references, there remain a few clues that give away The Sacred Feather’s origins in depression era literature—like the very first scene.  Kay and her mother are cooking dinner one night when they hear a knock on the back door.  It’s a tramp!  An honest to God tramp--going door to door in search of food, no less.  Equally charming, Kay actually invites the tramp in for dinner.  And no one worries for even a second that this drifter might disembowel them all and dance around the living room with their entrails draped around his neck. 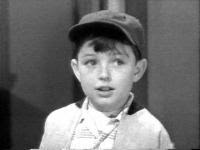 I don’t know how often backdoor hobos got fed in real life during the Depression, but as a story convention it certainly survived for many decades as a sign of basic American decency.  A man comes to your door hungry, you feed him. Don’t mention it pal, you’d do the same for me.  Based on the documentary evidence of Leave it to Beaver, however, I think this convention was beginning to wear a bit thin by the late 1950s or early 60s.   You might remember that Beaver, home by himself for the day, once let a tramp into the house who quickly ate his way through the Cleaver pantry.  Then the guy went upstairs, took a long bath, and stole a suit and new shoes from Ward’s closet.  No one got too mad at the Beav, seeing as he never was the brightest rodent in the burrow to begin with, but you also got the sense that the next tramp wandering through Mayfield might be met with shotguns and torches.


But Kay’s tramp isn’t an ordinary tramp, he is, as the chapter title says, “picturesque.” In this case that means he’s from Egypt.  Kay’s mother offers him a bowl of soup, prompting the book’s first eruption of effusive “Egyptian-speak:"


Soup! A plebian name for one of your magnificent American dishes.  A mixture of the commonplace and the sublime.  Madam, if I might say so…Ah, yes, it would warm not only the inner creature, but the soul as well.  It would induce a divine peace to descend upon my humble spirit, I assure you!"

Like other exotics prowling the teen imaginary of the era, “Abou” speaks with the gloss of a colonial British education and yet with the undertone that he is awaiting an ancient God to return and turn the world’s oceans into sand.  In this respect, the book echoes the equally stilted and bizarre discourse of Fuad Ramses, the Egyptian caterer in H.G. Lewis’ Blood Feast (1961) who also finds himself entangled in the uniquely American customs of teenage girldom.  Only in that case, Ramses' offer to prepare “the feast of Ishtar” for a young debutante really does mean disemboweling her and dancing around the living room with her entrails draped around his neck.


But I digress.  No sooner does Abou finish his “commonplace but sublime” soup, Kay’s friends arrive with big news: the city library is on fire!  Not only that, but a strange looking tramp was seen in the library’s “Egypt Room” not an hour ago, and that is exactly where the fire started!!!  You might suspect that you’re not supposed to suspect Abou because he is so obviously suspicious, and you’d be right (congratulations, you have just outwitted a 13-year-old girl circa 1942).  Just to make sure, though, Kay’s caretaker, her older cousin Bill, tells her as much later that night.  “Purely circumstantial evidence,” cousin Bill declared, “The fellow shouldn’t be condemned on hearsay. If I were you, Kay, I would say nothing about it to strangers until we’ve had an opportunity to investigate."


But let’s back up. The Egypt room?  What a wonderful fantasy of a bygone era that never existed in the first place, when even a humble little library in an imaginary crapburg like Carmont had its own Egypt room. Personally, it brought a tear to my eye imagining girls and boys on the way home from school stopping by the library to check out a darkened room full of jewels, mummies, and sarcophagi, perhaps followed by a round of root beer floats at the maltshop and excited speculation over the possibilities of an ancient curse creeping through the town.  Sadly, public libraries long ago became little more than a refuge for flashers, peepers, and people too old and technically incompetent to steal music and movies out of them Internet tubes, so this detail would also doubtlessly require updating should Kay sleuth again in the new century.


Abou still seems like a good fit for the fire, and soon libraries and other buildings are burning down every other night in all the communities surrounding Carmont.  Then, in another rather stunning turn of orientalism, a new batch of suspects arrive in the mix:  the Iran family!  The Irans are a really loud and combative clan that live in the poor part of town, speak only Arabic interlaced with pidgin English, and are somehow trying to swindle an estate away from one of Kay’s best friends.  In one of Kay’s many hare-brained ruses, she and her friend dress up as door-to-door jewelry salesgirls to spy inside the Iran home.  Like any other vaguely Araby-Persianish-Gypsylike-middle-eastern woman, Mrs. Iran is utterly bedazzled by the sight of a stupid rhinestone Kay has brought along for the performance, prompting Mr. Iran to yell abusively from the kitchen, “Go way. No money.”  So we hate the Irans because, unlike Abou, they have bad taste, lots of snotty kids, and can’t be bothered to learn proper English. 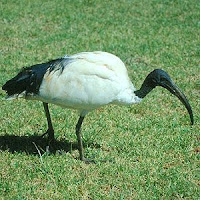 But in the end, even they are not the real culprits.  That honor goes to the eponymous “Sacred Feather,” a cousin of the Irans who works at a theater in a nearby town as a magician and sword-swallower.  He also has a penchant for disappearing in fiery puffs of smoke, which is suspicious to say the least.  In the exciting conclusion, he finally catches up with Kay and her friend in an old warehouse, knocks the friend out, ties Kay up, and then tries to burn down the building—and yes, like on the book cover, he has a big feather with him, the sacred feather of an Ibis bird, which somehow figures in his exotic shenanigans.


Here’s the final Scooby-doo:  The “Sacred Feather” is a total pyromaniac, or as the police chief says later, someone who “has an insane desire to start fires.”  Worse yet, he practices pyromancy, which means he believes he can “learn things from heaven by means of fires of sacrifice” (word for the day!).  Somehow two local crooks found out about Mr. Feather’s proclivities, and then decided to exploit his pyromania so that they could disguise themselves as workers “rescuing” valuable items from his various fires.  Case closed.

There’s an excellent website on Kay Tracey from which I have cribbed some of the background here.  As the site says, these stories are much weirder than the Nancy Drew yarns and “part of the fun in reading the stories is seeing how bizarre the plots are.”  I would have to agree.  A typical day for Kay, at least based on this one story, might involve cracking a secret code before breakfast, going to school all day, seeing a fire on the way home, hiding in someone’s trunk to see where their hideout is, jumping into a river to save a little girl with absolutely no relation to the plot, helping Mom chop celery for dinner, going to the school mixer with “Ron,” exchanging barbs with her nemesis “Ethel,” tracking suspicious figures lurking behind the school, discussing the case at home with Bill, hearing a strange bird-cry outside her window, and then going to bed to start all over again the next day. Proof once again that ADD is a complete charade perpetrated by the pharmaceutical industry.  Teenage brains have always been addled by the overexcited emplotment of daily life.
Email Post
Labels: Archeology Books Gothic Paracinephilia Popular Sublime