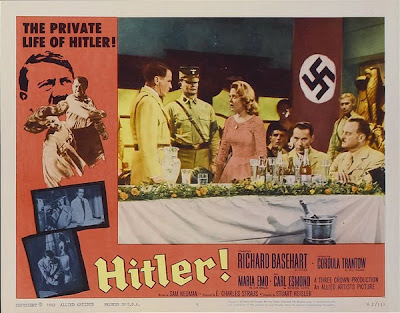 Before becoming Admiral Harriman Nelson on ABC’s Voyage to the Bottom of the Sea, actor Richard Basehart starred in Hitler, an exceedingly odd film about the “private life” of der Fuhrer.  Released in 1962 by Allied Artists, the film speculates about Hitler’s possible psychosexual dysfunctions in relation to the three most important women in his life: Geli Raubal, Eva Braun, and, of course, his mother.  In this respect, the movie is oddly prescient of Male Fantasies (1988), Klaus Theweleit’s two-volume study of the primary architects of Nazism and their exceedingly bizarre relationships to women (Hitler, in fact, was also released under an alternate title, The Women of Nazi Germany).


In the bygone era of syndicated movie distribution for local television, Hitler would occasionally play on affiliates and independent stations in the middle of the night.  Eventually absorbed within the Turner Broadcasting empire, Hitler played at least once on a TBS showcase called 100% Weird, the forerunner of TCM’s intermittent “Underground” slot (now blocked late on Friday nights whenever the hell TCM feels like it).  As a part of 100% Weird, Hitler stood alongside Plan 9 (1959), Eegah! (1962), and, oddly, his decapitated self in They Saved Hitler’s Brain (1964).  Like these other films, Hitler was a seemingly impossible artifact—a movie too strange, too outré, too weird to be believed.  And yet, unlike the low-budget pantheon of “badfilm” that typically played on 100% Weird, Hitler was actually a competent, professional, even accomplished production (earning a Golden Globe nomination that year). 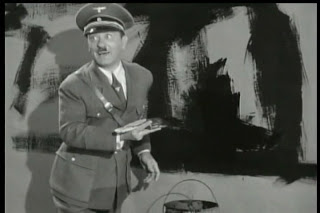 What made Hitler “100% Weird?”  No doubt it is the strange effect of seeing Hitler, as one of the 20th century’s most over-determined signifiers, inserted into the look and logic of a 60s biopic—an extremely melodramatic one at that. While the film certainly does not try to generate any sympathy for Hitler, the sight of the emotionally flummoxed dictator repeatedly tricked and betrayed by the women around him does foster a strangely comic empathy.  Or perhaps this empathy is not so much for “Hitler” as it is for the cast of Hitler, if only because the very idea of dramatizing Hitler’s romantic life seems so profoundly tasteless that one cannot help but be embarrassed for everyone involved.  Hitler has always been available for humor—from Hal Roach shorts like The Devil with Hitler (1942) and Nazty Nuisance (1943) to the current viral cycle of Downfall videos (see below for Hitler’s outrage over Jay Leno).  But the “weird” humor of this particular Hitler stems from a “failed seriousness” (to invoke Sontag on camp) so failed and yet still so serious as to invoke a palpable sense of uneasiness in the viewer.
The same effect can be glimpsed in the illustrations below, take from the 1976 edition of A Pictorial Encyclopedia of American History.  A 25-volume set, the encyclopedia details the history of “America” from 1540 up to the election of Jimmy Carter and the nation’s Bicentennial.  No doubt to save money (and/or to keep squirming kids focused on brightly colored displays), there are no photographs of any kind in the encyclopedia.  Moreover, every single event deemed worthy of illustration is rendered in the same highly recognizable style of commercial art common to textbooks of the late 60s and early 70s.  Overall, this gives a strange sheen to the year-by-year progression of American history, everything from Ponce de Leon to the Warren Court awash with the same shadowless array of primary colors.


But things get especially “weird” in 1967-68—a year so notoriously tumultuous that it is one of the few to receive an entire volume’s worth of coverage. 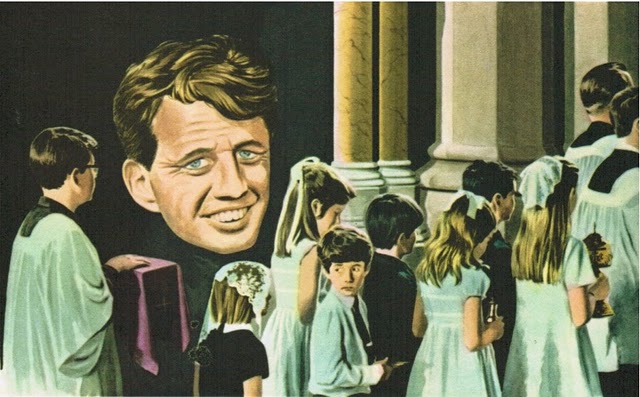 The above illustration for Robert F. Kennedy’s funeral service is a particularly bizarre image, and one of only a few in the entire encyclopedia that allowed the artist to embellish a bit on the historical scene.  Here we see the famously large Kennedy clan filing into (out of?) the chapel while RFK’s disembodied head floats mysteriously in the background.  Assuming there was no gigantic cut-out of RFK’s face set on black velvet at the actual service, one has to surmise this is some invocation of the Kennedy "spirit" watching over the family and nation in its time of mourning.  Perhaps this was meant to comfort the elementary age children who might consult the encyclopedia—but it is easy to imagine how this image might also instill nightmares of ghostly surveillance, especially in children still too young to fully make sense of the visual convention at work here. 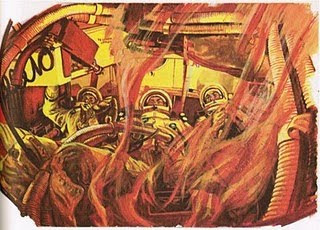 Even more horrifying is the artwork accompanying the account of the Apollo 1 launch-pad fire that claimed the lives of astronauts Virgil Grissom, Edward Higgins White, and Roger Chaffee on January 27, 1967.  While many other “gruesome” events in American history are tastefully displaced in the encyclopedia’s pictorial review, the artist in this case has chosen to address in most explicit terms a horror that otherwise has remained invisible to the public.  There are many images of the charred Apollo capsule in the public record, but as far as I know, images of the three men either during or after the fire do not exist (or at least have never been circulated).  Strange then that the artist, on this occasion at least, would make the decision to place us (or more to the point, elementary-aged children) within the claustrophobic confines of a burning command module at the moment of death. 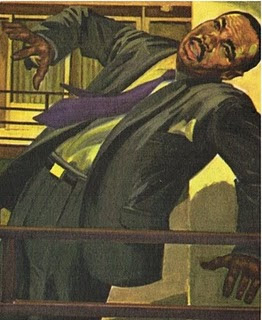 For the assassination of Dr. Martin Luther King Jr., finally, the artist has once again chosen an “impossible” and extremely unfortunate perspective.  The most famous image of Dr. King’s assassination remains the photo taken immediately after King’s collapse on the balcony of the Lorraine motel, the other members of his party pointing in unison to the apparent source of the assassin’s bullet.  Rather than mimic that photo, or perhaps follow the “memorial” model established by the portrait of RFK’s service above, the artist here goes for a more dynamic “action” image, freezing the moment of the bullet’s impact.  No doubt designed to emphasis the dramatic import of the event—again, a moment that does not exist in the photographic archive—the end result is King’s death essentially rendered as a “cartoon” (he could just as easily be slipping on a banana peel here).
Looking through the entire 400-year scope of the encyclopedia, I would argue these 3 illustrations in particular are the most pronounced in their sense of unsettling “inappropriateness.”  Other gruesome spectacles are included, certainly, but more often than not these are handled metonymically (a “generic” group of soldiers fighting and dying at Iwo Jima) or through a process of photographic reinterpretation (the picture of JFK’s assassination, for example, stages in close-up the image of Kennedy clutching his throat, first captured—at a distance—in the famous Zapruder footage.  Still somewhat tasteless, and yet somehow less egregious than MLK’s wholly hallucinated death above).  Many horrific events closer to the encyclopedia’s publication date, like the massacre at My Lai, are simply elided (in fact, Vietnam’s sporadic appearances in the encyclopedia routinely feature WWII-like images of soldiers making their way through rice paddies).
Was this artist just in a particularly strange state-of-mind when s/he hit this particular stretch of American history?  Or was there something about the import and proximity of these events (only 8 years in the past in 1976) that demanded illustration and yet thwarted arriving at more “appropriate” strategies of representation?  Or is it, finally, that these images—painted at the threshold of the photographic record’s exponential expansion across all public life in the 70s, 80s, and beyond—are simply particularly dramatic in emphasizing how utterly arcane graphic illustration has become in documenting history and popular memory?
Email Post
Labels: Archeology Paracinephilia Popular Sublime Troubling