I'm Not with Smart 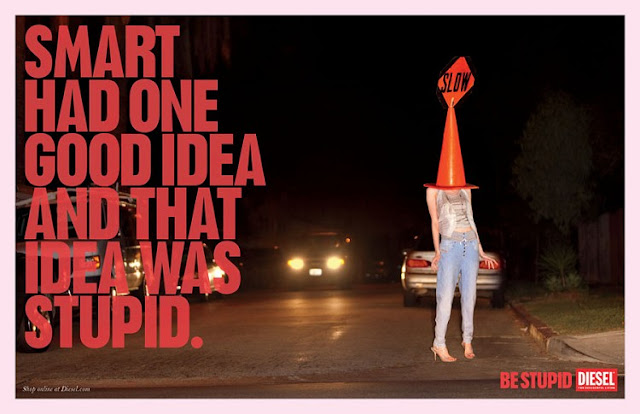 The Diesel company, an enterprise that apparently recycles old petrochemical products into body oils and sexual lubricants, has a new ad campaign—and boy is it a whopper. We are advised to “Be Stupid!” There’s even a website that “recruits” people into being stupid.  “Are you stupid?” we are asked.  “Well, we can help you to promote your stupidity.”  All you have to do is upload a video of yourself…doing something “stupid.”

But wait!  That’s outrageous!  People should be smart, not stupid, right?  Luckily, the campaign features a little poem to help explain things:
Like balloons, we are filled with hopes and dreams
But. Over time a single sentence creeps into our lives
Dont be stupid.
Its the crusher of possibility.
Its the worlds greatest deflator.
The world is full of smart people.
Doing all kind of smart things...
Thats smart.
Well,
were with stupid.


I double-checked on a few other websites to make sure I quoted this “manifesto” correctly, and it seems that I have.  So one of the things we have to look forward to in the sexy new stupid future is the further erosion of basic grammar and punctuation. 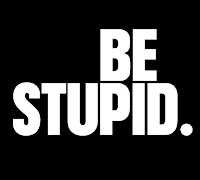 Yes, I know this is intentional on the advertiser’s part—that this copy was most likely written by some Sloane just out of Oxford (Diesel has hired a British firm, apparently) and that his little nugget of Footloose philosophy just bought him an ace flat in London.  And yes, I know this twaddle is designed to provoke predictable chains of viral transmission and thus make Diesel’s line of sex lotions even more visible and alluring to young miss and young master.  And deep down inside I know I shouldn’t allow Diesel’s stupid RNA to further replicate itself through this blog and continue spreading its stupid “be stupid” infection.

But they went too far.  You see, Diesel has virtually wallpapered these ads all over the B-Train’s 42nd Street station--which is the subway stop right beneath the main branch of the New York Public Library.  Yes, the one with the famous lions, embattled refuge of book learnin’, sacred temple for a century of New York intellectuals.  Susan Sontag, Norman Mailer, Charles Fort, Kurt Vonnegut, and Franz Boas are only a few of the “smarts” who stopped engorging their genitalia just long enough to go inside and read a book there.

As I haven’t seen this campaign elsewhere in the city, I have to assume this particular buy was intentional on Diesel’s part.  Really, Diesel, do I stand outside your corporate office with a “What Would Adorno Do” sign?  No, I don’t, and I would respect a little common courtesy on your part as well.  Putting this campaign under the NYPL is like booking a cheerleader camp and a Star Trek convention in the same hotel at the same time—it’s just mean and gratuitously cruel.

The website popsop.com describes the aim of the new campaign:

The well-known brand Diesel has launched a new provocative campaign ‘Be stupid‘. The global jeans manufacturer is assuring that there is nothing dumb about being stupid.  It is sure that the brightest ideas appear in the heads of those who are not afraid to express themselves. At first, these ideas may seem stupid, but over decades they start to rule the world. So, be brave, be spontaneous, be yourself.
The bright posters are conveying the idea that if you are tending “not to be stupid”, you kill your dreams, the world’s greatest treasure.
The campaign is rebellious, it’s calling you to arms. The victory comes only if you break the rules and listen rather to your heart than to the words of other people. Follow your inspiration, be stupid, the prints say.
Are there really any commodities left on the planet now that don’t routinely tell us to “break the rules,” “listen to your heart,” and above all, “be yourself?”  At this point, I’m sure there’s even a camouflage company out there somewhere that had a temporary brain-cramp and signed off on a campaign proclaiming their gear would help you be seen as an “individual” and “stand out in a crowd.”

Obviously, the main binary at work here isn’t all that difficult to understand.  “Smart” people worry about things that ultimately don’t matter—mortgages, oil changes, warranties, cholesterol, grammar, STD’s, gravity, etc.  Meanwhile the “stupid” comprise a tireless dynamo of spontaneous creativity, outrageous fun, and recreational sex.  In other words, the “smart” want you to be on time, read long boring books, take on bogus responsibilities, develop some capacity for empathy, and perhaps carry the spark of civilization—however faint and endangered—onward to other smart people in the future.  The “stupid,” on the other hand, are the young and rebellious who know it’s always better to act than to think—thus making them the bedrock of an economy based primarily on the cyclical excretion of hormones.

For years we’ve labored under the delusion that Nike’s “Just Do It!” slogan was a call to athletic commitment, but in reality it is a ruse to distract customers from questioning why they are standing in line to buy a 4th pair of sneakers in less than a year.

Then again, maybe Diesel is right.  Perhaps the answer to curing cancer, unlocking the mysteries of cold fusion, achieving social justice, and solving the riddles of existence resides in standing in the middle of the road with a traffic cone on your head.  I’ll admit, I’m just smart enough to have not tried anything that stupid.

Well, Diesel paid handsomely for these ads, so I guess the least we can do is take a closer look at them. 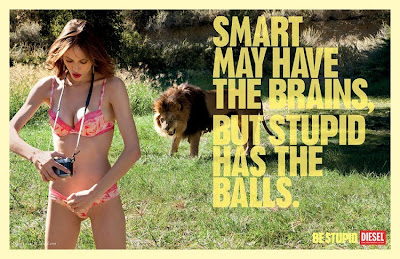 I think this one is my favorite, if only because it requires the “stupid” to decode a visual pun and thus engage in at least a modicum of critical activity.  Apparently this young lady’s erotic voyage of personal discovery has ended in an animal park of some kind.  While it may appear this image is capitalizing on the current furor over "sexting,” please note she is not using a cell phone to snap her snatch, leaving us to assume this act is purely for her own autoerotic enjoyment (either in the “taking” or later in the “looking,” we cannot say).  But won’t she be surprised when that giant…let’s see, what shall we call it…PUSSYCAT jumps her from behind!  But, I’m sure she’ll get away just in time to laugh about her near mauling with her equally stunning boyfriend, probably a trust-fund poet named Pablo with his own condo overlooking the Mediterrean where they will later screw each others' brains out on the patio beneath the Leonids. A few months ago Justin sent a demo for his band to one of the more significant minor labels. After getting really drunk on Jaeger shots one night, the whole crew started bitching about how the label had sat on the demo for six whole months!   “Well whaddya expect?” offered Steve the drummer, “that label only signs crap bands anyway.”  “Hey, you know what would be hilarious?” offered bass player Chad.  “I saw a dead rat in the alley when I came in.  We should put it in a box and mail it to them!”  And so they did. But the next morning when Justin checked his voicemail, it turned out he just got a message from the president of the label—they love the demo and want to sign Justin's band to a 3 record deal!  Justin runs over to their rehearsal space to tell everyone the good news.  But then Steve remembers….uh oh.  Okay, so it’s an old Honeymooners plot.  But how else can this image be made “cool?” Or is greasing up your head and sticking it in a mailbox some new form of erotic deterritorialization the kids are into these days? 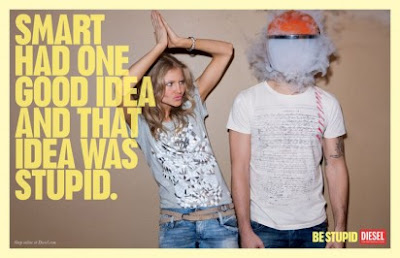 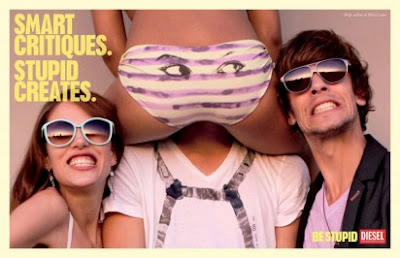 Yeah, I get it Diesel. Thanks. Nice auto-inoculation against "critiques" of your campaign.  And congratulations on "creating" Magritte once again. Does "Be Stupid" ultimately mean too derivative for the Whitney, too arty for Levis?  Thank god you've found a home at Diesel! 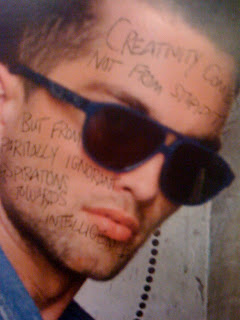 I would rage further, but what’s the point?  In the end, these ads only reconfirm what most “smart” people know already:  If you are young and sexy enough, you can take a crap on the Magna Carta and most people will just stand around applauding.  Personally, I guess I’m so tiresomely smart that this campaign only makes me want to lie down on a stack of Michel Houellebecq novels and light myself on fire.
Then again, there is always hope.  Going back to the NYPL a few days later I noticed that a fellow misanthrope had defaced one of these ads.  Over the pasty-white, half-shaven face of yet another guy in sunglasses proclaiming, "smart critiques, stupid creates,” someone had written “Creativity comes not from stupidity but from partially ignorant aspirations toward intelligence.”  God bless you fellow B-train rider and library patron. When they come for us, I pledge to barricade the reading room and then fight and die by your side.
Email Post
Labels: Commerce Fatal Strategies Just Depressing Magical Thinking