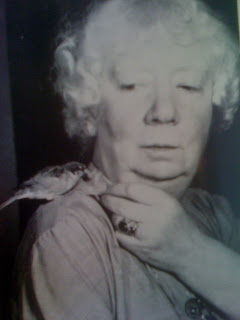 Here's something you probably didn't know. In 1940, two weeks after her husband died, Clare Kipps (right) found a "crippled" baby sparrow on her front porch.  She took the bird in and named him Clarence (but that's NOT him in the photo). During the London blitz, Clarence became a minor homefront celebrity by amusing everyone in his local bomb-shelter.  He could do card tricks, pretend to read the paper, and in a stunning finale, impersonate Hitler (a beautiful image: the Luftwaffe flying in formation above, Clarence the flightless sparrow mocking Der Fuhrer from below).  Clarence passed away in 1952 at the age of 12, and Mrs. Kipps published a memoir of his exploits in 1953 under the title, Sold for a Farthing.

For most people, sharing a home for 12 years with a sparrow hopping from room to room would probably be enough (Kipps describes the difficulty of not stepping on Clarence, especially after his stroke of 1951 made him less able to discern domestic traffic patterns). Only a few months after Clarence died, however, a woman contacted Kipps to ask if she wouldn't consider adopting another wounded sparrow.  At first Kipps was hesitant (Clarence's death, she remarked, had finally made her free to travel a little), but with a little more persuasion, she adopted "Timmy" (above) in 1954.  This photo is in fact from Mrs. Kipps' second (!) sparrow biography, Timmy: The Story of a Sparrow (1962).
Timmy, we learn, was a much more gregarious and quarrelsome sparrow than his predecessor. And while he couldn't impersonate Hitler, he could do his "church" trick (below), which consisted of Mrs. Kipps giving Timmy a coin and telling him to give it to the Vicar.  Timmy would then dutifully take the coin behind a photo frame and place it in an ashtray. 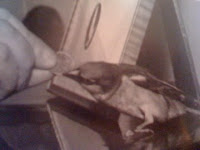 The British public does not seem to have taken to Timmy with quite the same fervor as Clarence, even though the "church trick" was actually more impressive than Clarence's Hitler impersonation (which appears to have consisted of Clarence chirping louder and louder atop a little tin cup until he at last swooned and fell over).  The real hero here, of course, is Mrs. Kipps, who ended up sharing her home with an uncaged sparrow for 22 years.  And her friends, perhaps, who willingly came to visit a woman who kept an uncaged sparrow in her home for 22 years.
Most fascinating of all, however, is the strange proto-logic of the sequel: the belief of a small British press that the market could sustain not just one, but two books about the intrigues of sparrow companionship.
Email Post
Labels: Animal Kingdom Archeology Books England Regressive Phenomena