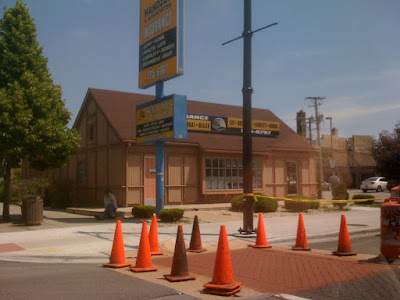 If there are any amateur sociologists out there who are looking for something to do, here's a question to ponder: why do so many bankrupt fast-food chains become low-end insurance huts? This is a former Long John Silver's on Pulaski Avenue in Chicago reborn as "Handzel and Associates Insurance." You can tell it's an old LJS, not just from the distinctive shape of the roof, but from that franchise's familiar door placement (yaargh, in on the right, out on the left maaties). Trademark Cape Cod windows that used to frame families eating fried fish, hushpuppies, and enigmatic LJS "crispies" now showcase nervous drivers looking for basic collision coverage (Note too the city of Chicago's ongoing attempt to transform all of its crosswalks into simulations of 1890s urban design--the traffic cones are protecting a recently installed "brick" crosswalk that, in fact, contains no actual bricks but is instead a brick-signifying template impressed into hot asphault and then painted red).

Abandoned LJS and old Taco Bells seem to be particularly attractive homes for low-budget insurance firms, liquor stores, pawn shops, and other stand-alone, unfranchised local businesses. Much of this is no doubt tied to demographic changes in older middle-class neighborhoods. For example, as this particular neighborhood in Chicago became increasingly settled by immigrants from Mexico and other Latin American nations, the need for basic insurance coverage clearly became a more pressing local concern than access to the nautical fantasy of a New England-like grease emporium. When the older ethnic whites leave, they seem to take the franchised fast-food joints with them. With any luck, a Taco Bell then becomes an actual tacqueria, or failing that, a reasonably priced chiropractor's office.

In the case of Taco Bell, architectural changes are important as well. When TB made its move to be a national player in the fast-food game (after Pepsi-Co purchased the chain in 1978), they embarked on re 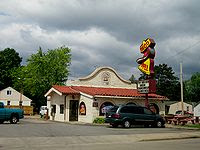 designing their restaurants to better accommodate increased kitchen and drive-thru traffic. As the old TB design (top left) could not be effectively retrofitted, many of them were simply abandoned and replaced by a

newer facility (bottom left). Maintaining an uninterrupted flow of taco income was apparently so important that Pepsi-Co chose to construct a whole new facility just down the street rather than tear down the old structure to build the new one on the same site. Once the new building was ready to conduct its unholy experiments in lard, beef, and bean structuralism, the old site could then be leased to a new occupant.

Driving through older neighborhoods and down major urban arteries, you often see these old fast-food huts disguised with varying degrees of success. Sometimes they result in odd ethnic shifts of form and content, as in 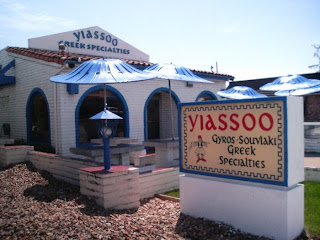 the example of Yiassoo Greek Specialties (right). Whatever the new business within, however, these re-purposed examples of branded architecture remind us that fast-food and fast-architecture are closely related--mutually symptomatic even. No doubt this explains why so much of the United States is so hideously ugly and so many of its citizens are fat and dyspeptic. There is a causal, direct relationship: sociological, asethetic, perhaps even karmic. In this respect, access-road blight and urban stripmalls are to public space what the most foul gaseous burp is to gastric distress. If the nation willingly consumes foodstuffs magically conjured into life from dehydrated bean dust, why should we expect it take the time to consider how a zillion faux-adobe huts might transform the landscape into an architectural vomitorium? Take any urban freeway exit or small town "business route" and you will see a Venturi-esque Las Vegas where nothing is learned, except perhaps the despair that comes with seeing the avenues of American consumption reduced to their most elementally horrifying vehicular and intestinal forms.

Doubtlessly the overlords at Pepsi-Co see these franchises as efficient and attractive temples of tidy commerce, as evidenced in this hallucinatory architectural model for a "typical" Taco Bell (below). 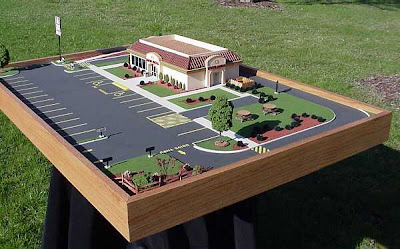 As is generally well known and accepted, architects have little use for actual people--and so this TB remains pristine and ideal so long as it stands apart from the actual everyday implications of fast-food commerce (even the "kill floor" of an abattoir no doubt looks gleaming in the original blueprint). With its greenery and picnic tables, this model is meant to signify a public park more than a gastro-scenic invader--its balanced rectangles of building, grass, and parking offered as a temple of orderly corporate beauty (perhaps most enjoyable to the cars that will one day fill its lot). It is the type of vision offered to zoning commissions and reluctant neighbors to emphasize Taco Bell's positive contribution to the surrounding community.

Of course, as anyone who has worked in or lived near a fast-food franchise knows, they are disgusting beyond belief--a repressed reality that only occasionally bubbles back to the surface when some high-school punks are caught on the surveillance camera pissing in the sink or flickin' boogers into the special sauce. We should salute these heroes, who have sacrificed saving up for a Wii or making next month's child support just to remind the rest of us that the insanely enthusiastic fast-food worker so often featured in Mickey D.'s advertising is nothing more than a subterfuge to distract us from the fact that the line-cook is actually out back in the parking lot tweeking-up to finish the night shift.

Now that the FDA is taking control of the cigarette industry, maybe they can move next to fast-food franchising. No warnings labels necessary: all that needs to be done is pass a law requiring that customers have to enter the "restaurant" through the back door, near the dumpster. Stuffed with greasy packaging, greasy half-eaten meals, greasy rats, and grease in general, the typical fast-food dumpster is perhaps the most potent emblem of contemporary alienation imaginable--an alienation of labor, the body, and the community. Certain municipalities attempt to blunt this horror by forcing the chains to reduce the height of their signage out front, as if this makes both the food and the architecture more "tasteful." But as anyone who has ever cleaned the grease trap on a fry machine will agree, a leper colony would make a better neighbor.
Email Post
Labels: Commerce Just Depressing Rapid Ingestion