A Poorly Conceived Lecture on Glands

Low-budget filmmaking has to find spectacle wherever it might be, especially in genres like horror and science-fiction that have promised to deliver some form of gruesome and/or futuristic attraction. In The Unearthly (1957), mad scientist John Carradine discusses his plan to insert a newly created "17th gland" in the body, thereby creating "eternal youth." As gland function did not figure as highly as UFOs or irradiated locusts in the sci-fi imaginary of the late 50s, Carradine turns here to a helpful anatomical model (no doubt on loan from a local medical school) so that he might point out a few glands and explain their purpose. The scene is fairly typical of clunky fifties exposition--Carradine quite literally lectures a house-guest 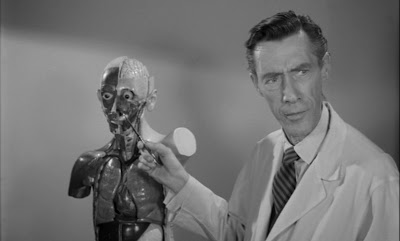 and the audience about the ability of glands to control growth, intelligence, emotion, etc. As spectacle goes it's pretty cut-rate, but in a film where the only other attraction is the massively rotund body of former wrestler Tor Johnson, a brief look at a dissected body, even if it is only plastic, will have to do.

But director Boris Petroff finds he cannot resist the temptation of returning to Mr. Viscera once again. Later in the scene, after a series of axis-jumping shot/reverse-shots between Carradine and his guest, Petroff cuts to this two-shot (3-shot?) as Carradine threatens to blackmail his co-star. Incredibly, this shot holds unchanged for a staggering 66 seconds, Petroff attempting to milk every last ounce of grotesquerie out of this lowly prop. That's over a minute of staring face-to-face with popeye here as the two actors attempt to deliver their lengthy dialogue exchange. 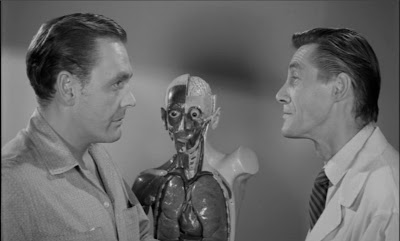 As so often happens in such exercises in duration, what is meant to be scary, creepy, or unsettling simply becomes humorous. And upon reflection, one begins to wonder about issues of scene dissection as well. Perhaps if Petroff had featured this shot before Carradine's helpful glandular lecture, the model might have provoked a greater degree of shock. Having already played its expository role in the scene, however, the model's anchoring of this static 66 second composition only recapitulates the creative and spectacular poverty of the entire film.
Email Post
Labels: Bio-Horror Paracinephilia Semi-Formalist Analysis